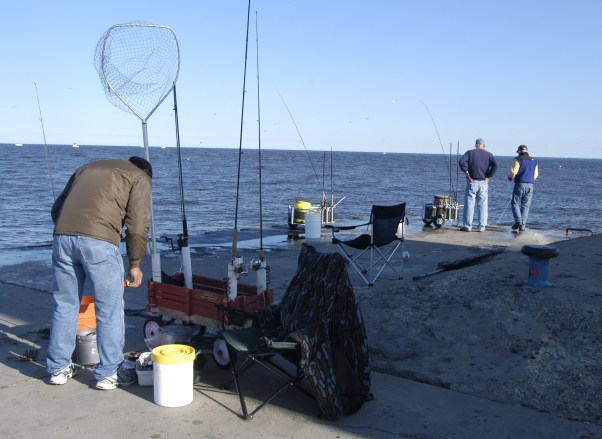 Grand Rapids, Mich. — It may be the weather or Michigan’s new license structure, but fewer anglers have purchased fishing licenses this season compared with 2013. State officials say the license year is half over, but the decline in sales, so far, is clear.

“It’s hard to tell what it’s attributed to,” said Kristen Shuler, analyst with the Michigan DNR licensing and reservation section. “It was a cold summer and it may be more weather-related, but we don’t know yet.”

Most of the decline occurred with nonresident anglers, who saw annual license fees increase from $42 to $76 for Michigan’s all-species fishing license.

Many opted to purchase $10 daily licenses instead.

“A lot of people bought five or six daily licenses rather than pay $76,” said Denise Gruben, manager for the licensing and reservation section. “The longer-term trends are that participation is declining, and we were excited to see that it went up in 2013. That was an early start year. We had a warm spring. But in 2014, people in the U.P. were afraid of hitting an iceberg with their boats.”

License dealers say customers continue to grumble about the restructured license program that went into effect in March, once the Legislature set the new fees. The changes were made to simplify the license program and generate additional revenue for the Michigan DNR.

One controversial change, among others, is the elimination of the $15 resident restricted fishing license, good for all species except trout and salmon. Resident anglers had the choice of buying that or the $28 all-species license. Only the all-species license is offered this year at $26.

“The panfish fishermen are disgruntled,” said Katie VanDam, at D&R Sports Center in Kalamazoo. “They don’t like paying for the extra fishing they don’t do. They grumble and then buy it. It is cheaper than getting a ticket. But, I have had a few refuse to buy it and say if they get caught, they get caught.”

Tina Droomer, the front-end manager for Jay’s Sporting Goods in Clare, said female anglers also have been upset. Often panfish enthusiasts, they don’t like being forced to spend more, she said.

Jim Dexter, fisheries chief for Michigan DNR, said he noticed a surge in license sales between August and September this year, the front end of the salmon and steelhead fishing season. That tempered a greater decline seen earlier in the year.

“We estimated our budget based on a 7-percent decline. We haven’t lost as many license sales (as predicted),” Dexter said. “I am pretty excited. We are technically only six months into our license season.”

After more than 30 years in the outdoor writing business, you would think I'd know better.
View all posts by Howard Meyerson →
This entry was posted in Uncategorized and tagged DNR, Fishing, Michigan Department of Natural Resources. Bookmark the permalink.