Study finds black bears are not establishing themselves in southern Michigan 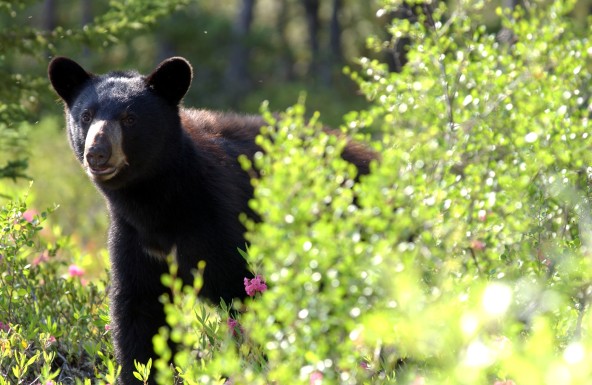 Most southern Michigan sightings were young bears pushed out of their territory. Photo: Wikimedia Commons.

Maybe you remember the news reports: “Michigan black bears are moving south.” A spate of sightings just a few years ago confirmed that bears were showing up in unusual locales, such as Flint, Battle Creek, St. Charles and Lansing.

State biologists thought a population might have established itself just north of Grand Rapids.

And, if it was true that black bears were moving south, state wildlife managers wanted to educate southern Michigan citizens about living peacefully with bears in the neighborhood.

Well, that was then. Dwayne Etter now believes bears are not moving south to establish self-sustaining breeding populations in southern Michigan. He is the Michigan DNR wildlife researcher who collared and tracked 18 of the more southerly bears, beginning in 2010.

Each bear was found in a winter den and fitted with a GPS collar that transmitted its location every half-hour. The data points, when plotted on a map, showed Etter where each bear traveled — which river corridors they navigated; what routes they took through a forest; whether they crossed farmers’ fields or went the long way around them.

“I don’t think we will see bears expanding into southern Michigan and becoming residents,” said Etter, who plans to terminate the study this winter and pull the collars off the last four bears. “They are not establishing themselves down here.”

Etter said most of the bears were young males and females that got pushed out of their northern range. They headed south and eventually denned up for the winter. Females that had bred went about having their litters. Young males headed back north in spring to find a mate.

“Back in 2007, the DNR retrieved a road-killed bear cub near the Barry State Game Area,” Etter said. “We had reports of a sow with cubs in that general area earlier in the summer, so likely there was a female that reproduced. However, I’m unaware of any additional sightings of females with cubs in that area since that time.” 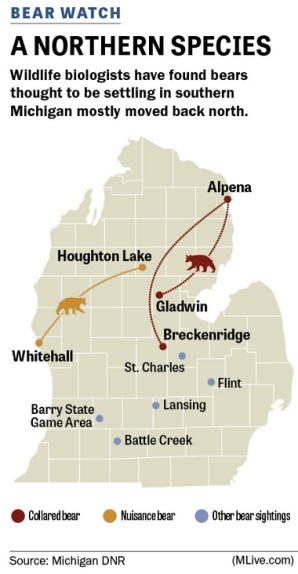 Etter’s findings showed several surprises, including how far black bears will travel. One nuisance bear, collared near Whitehall, traveled as far as Houghton Lake. It wandered up the White River corridor in spring, eventually crossed the Muskegon River and established a home range just south of Houghton Lake — approximately 125 miles from its den.

“He knew right where he was going,” Etter said. “He moved up there and settled in until he was harvested in the fall.”

Another male traveled 75 to 100 miles from Breckenridge, a Gratiot County village southwest of Midland, to Alpena County, where it spent a couple of weeks before moving 50 miles south to Gladwin County. Once there, he was killed by a hunter.

Etter was surprised to learn that bears all use the same travel corridors, the same routes through brush, swamps and forests.

“We know riparian corridors are important,” Etter said. “But they all use the same travel paths, even in big woods. We are trying to shake out what it is they are looking for as they navigate through them.”

The GPS data, literally thousands of points on the map for each bear, also showed where they stopped — and sometimes spent weeks. Etter visited one of those spots and found the ground littered with acorns and beechnuts.

“Bears have good memories. They may move 20 miles to an oak ridge and set up,” Etter said. “This male returned to spots within a couple hundred yards from each other, from September through mid-November, and spent a two-week period from the end of October into November. He fed there for two weeks.”

“What we’ve seen … is they prefer to walk two miles around a field rather than a quarter-mile across it,” Etter said. “It’s pretty striking to see.”

But, truth be told, not all are happy. Many complaints over the years have come from southern Michigan residents who built second homes in bear country. They were unprepared for the reality that bears do what bears will do.

Etter’s study has shed some light on bear travels in southern Michigan. Fortunately, for those more concerned about sharing space with the beasts, it is something they need not worry about.

After more than 30 years in the outdoor writing business, you would think I'd know better.
View all posts by Howard Meyerson →
This entry was posted in Uncategorized and tagged Bears, Black Bear, Conservation, DNR, Environment, Michigan Department of Natural Resources, Nature, Wildlife. Bookmark the permalink.