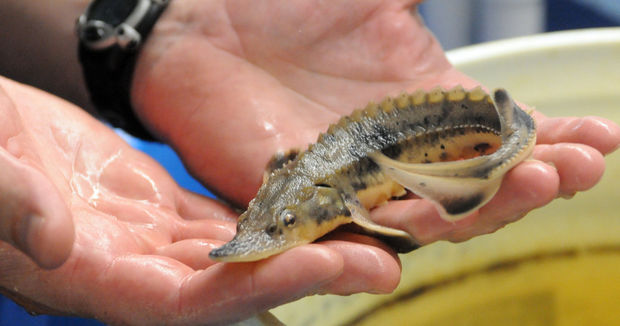 Thirty two juvenile lake sturgeon, about the size of this one shown, were found dead on the Muskegon River. Photo: MLive.

MUSKEGON, MI – Wildlife and fisheries management is full of seemingly damaging actions — those undertaken to achieve some “greater good,” meaning the betterment of a particular species. We set fires to create prairies and improve habitat for butterflies; we allow wolves to be killed for the greater good of communities affected by having too many; and we treat rivers with chemicals to kill “rough” species, such as carp, so other popular game fish can thrive.

But, what if attaining that greater good means killing a threatened species?

I was troubled by what happened on the Muskegon River in September, when 32 baby sturgeons were killed during a sea lamprey treatment conducted by the U.S. Fish and Wildlife Service.

The lampricide TFM — 3-trifluoromethyl-4-nitrophenol — can kill non-target species, but lake sturgeons are a state-designated threatened species. Extraordinary measures should be undertaken to preserve them. Work to restore them in the Muskegon River has been ongoing since 2006.

Didn’t have to happen

What’s troubling is the kill could have been avoided with better communication between state and federal agencies and, perhaps, more flexible treatment scheduling. It appears the kill was the result of bad timing rather than the misapplication of TFM, the standard chemical used to treat lamprey-infested rivers.

“Thirty two is the number we found, and there are probably others we haven’t found,” said Kregg Smith, the Michigan Department of Natural Resources biologist who supervises the Muskegon River sturgeon restoration effort. “I don’t think it was a matter of human error. And I know the Fish and Wildlife Service is concerned about it and is working on ways to improve (TFM applications and strategy).”

What happened, according to Smith, might be the result of changing weather patterns. Adult sturgeons in the river spawned later than usual, sometime in June, possibly because of the late spring and colder water temperatures. They still were upstream in mid-September. Normally, they are downstream or in Muskegon Lake.

The young that died were 6 to 8 inches long; all were born this year. And it is known that sturgeons, like the mudpuppies that died, are susceptible to TFM.

“We were never made aware of any concerns,” said Shawn Nowicki, the supervisory fish biologist with the Fish and Wildlife Service’s Marquette Biological Station. She coordinates the TFM treatment program.

“We put a treatment schedule together in January and then consult with state agencies about the dates,” Nowicki said. “We scheduled the Muskegon as late as possible, and there were no concerns or issues (expressed by the DNR) then.”

The Muskegon’s treatment was changed from mid-August to mid-September, she added, because of concerns sturgeon might be present in August. The treatment schedules for many rivers were all developed at that time. Work orders then went out to the field. The treatment was executed as planned, with no glitches. Everything was done to standard, Nowicki said.

Was it worth it?

Nowicki said she was aware of the sturgeons, salmon, logperch and mudpuppies, along with “thousands and thousands of sea lamprey larvae — the most observed during a treatment.”

That, she suggested, was a greater good.

“The Muskegon River has 4.5 million sea lamprey larvae in it,”Nowicki said. “If we didn’t treat it, the river would produce 111,000 parasitic adults annually. Each of those can kill

The Muskegon River is one of the largest sea lamprey nurseries in the Great Lakes.

40 pounds of fish, so we are looking at 4.5 million pounds of Great Lakes fish (that are saved). It’s unfortunate that this happened, but we are saving those adult fish that are out in the lake already.”

Jay Wesley, the southern Lake Michigan supervisor for the DNR, said, “It’s not big news that TFM affects non-target species. And, we write off other fish mortality for the greater good of the Great Lakes because we know we have to keep the number of lamprey down.

“But when you see a threatened species affected, it is a concern. We spend a lot of time and effort trying to rehabilitate those species, so that is something we will try to do better in the future.”

“It’s a concern for everyone,” Dexter said. “What this will lead to is further discussion by all the management agencies on the Great Lakes about how we can fine-tune treatment so we don’t lose sturgeon. Thirty-two is a lot of dead sturgeons.”

Far too many to allow for a state threatened species.

After more than 30 years in the outdoor writing business, you would think I'd know better.
View all posts by Howard Meyerson →
This entry was posted in Uncategorized and tagged DNR, Environment, Fishing, Lake sturgeon, Michigan Department of Natural Resources, Muskegon River, Sea Lamprey, U.S. Fish & Wildlife Service. Bookmark the permalink.