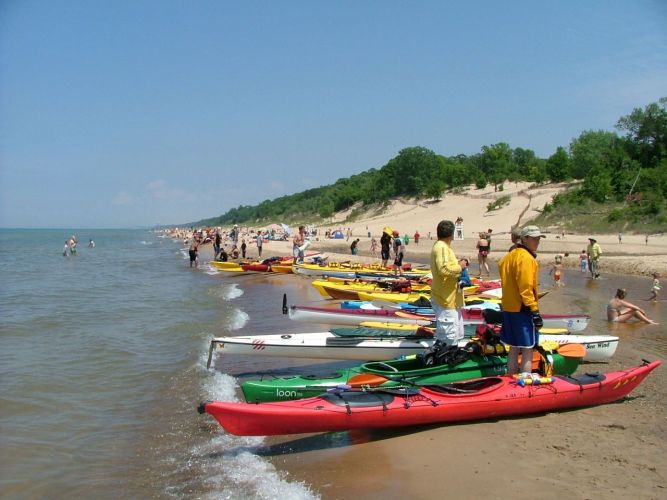 When Dan Plath and his friends set off in late July to paddle 50 miles along
the southern Lake Michigan shoreline, their journey will be one of adventure
and celebration. Plath — an environmental scientist and president and founder of
the Northwest Indiana Paddling Association (NWIPA), a non-profit with 600
members — wants to demonstrate support for the National Park Service (NPS)
as it celebrates its 100th anniversary this year. The federal agency is facilitating a
multi-state effort to create a paddler’s water trail around the world’s fifth largest lake.

Lake Michigan waters are known to be unpredictable: Strong winds, storms and
waves can force paddlers ashore. But the lake’s southeast shoreline is very hospitable to
paddlers. A large segment was designated as a National Recreation Trail in 2011, a part
of America’s National Trail System, which is administered by the NPS and U.S. Forest
Service. Sandy beaches are plentiful, as are well-marked launch and take-out points.
Getting off the water in inclement weather will be no problem, according to Plath.

“Our 75-mile stretch between Chicago and New Buffalo is fully-functional and
well-used,” says Plath. “We have signs at all the public access sites in Indiana. They
show paddlers where they are, the distances between locations, and the history
of the trail and local area.”

Plath and NWIPA volunteers spearheaded much of the water trail development. The group partnered with national lakeshore staff and those at Indiana Dunes State Park. Both offer campsites where paddlers can stop for the night. There are restrooms at access points, and signed and buoyed areas, so paddlers know where to land.

After more than 30 years in the outdoor writing business, you would think I'd know better.
View all posts by Howard Meyerson →
This entry was posted in Uncategorized and tagged Canoeing, Kayaking, Lake Michigan, Lake Michigan Water Trail, Paddling, Trails. Bookmark the permalink.