Posted on November 9, 2015 by Howard Meyerson 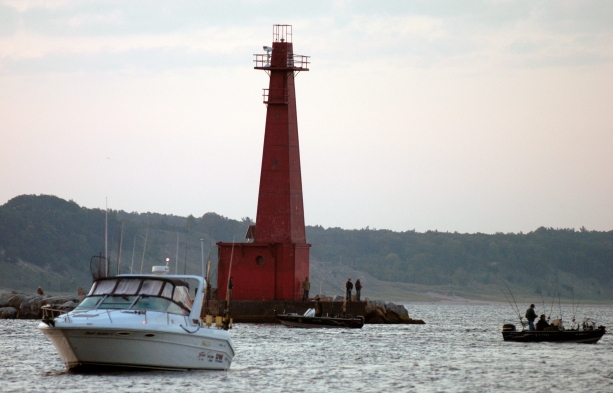 Lake Michigan salmon anglers troll for salmon off the port of Muskegon. Photo by Howard Meyerson

Grand Rapids, Mich – Lake Michigan will be stocked with 1.7 million chinook salmon in 2016, the same number as the past few years. Lake fish managers plan to hold the course rather than cut stocking in light of a dismal 2015 chinook salmon fishery.

“In April, I was ready to go to the (Great Lakes Fishery Commission) Lake Committee and recommend reducing it,” explained Jay Wesley, Michigan DNR’s Lake Michigan Basin Coordinator. “We weren’t seeing a big rebound in prey (alewives) and the advisors didn’t want to see the fishery collapse. Working with the committee through the summer we started to see wild recruitment was way down too. Then the lake warmed up and people started seeing alewives near shore. We grew confident that a spawning event was shaping up and convinced ourselves to hold the line.

“This season probably has the lowest (chinook) catch rates we’ve seen. There were days it was good, but it would disappear just as fast…And the (fall) river runs have been very poor throughout the lake – maybe a little better from Muskegon south – but well below average.”

Anglers still catch chinooks on Lake Michigan, but they are fewer in number and smaller these days. Photo by Howard Meyerson

The 2016 stocking decision comes three years following a decision by Lake Michigan fishery managers to cut chinook stocking by 50 percent lakewide, starting in 2013. The idea was to conserve the dwindling alewife population. The catch and forage base would be monitored for three years before deciding if further cuts were needed.

At the start of the 2015 fishing season, Wesley thought cuts were imminent. He said the Lake Michigan salmon population was down as far as it would go, about 75 percent below the peak in 2012. The decline, he says, is the result of the lakewide stocking cut and a decline in wild fish being caught, which dropped from 60 to 40 percent of the catch.

Dennis Eade, executive director for the Michigan Steelhead and Salmon Fishermen’s Association supports the state’s decision to hold the line. His group once strongly urged the Michigan DNR to eliminate chinook stocking in an effort to preserve alewives. They feared the fishery would crash as it did in Lake Huron when alewives disappeared. Eade said he is encouraged to learn the 2015 alewife year-class looks good on Lake Michigan.

“I think it’s a wise move to keep stocking at 2015 levels so there are some fish out there,” Eade noted. “At one point I did advocate no planting at all. I was being dramatic; it was a wake-up call. I am still very worried and some of my members are too. We love to target silver fish and don’t find the same gratification catching lake trout. Because of that I see the potential for a drop in sport fisher’s numbers. And that is an incredible threat.”

Salmon swim all over the lake

Hatchery-raised chinook salmon have coded wire tags embedded in their snouts. They 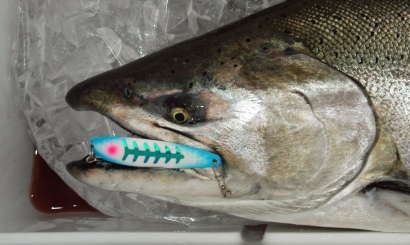 have clipped adipose fins so anglers can distinguish them from wild fish and turn the heads in for data collection. The collected wire tags tell researchers where and when the fish were stocked. That combined with knowing where they were caught provides insight about chinook salmon behavior.

Chuck Bronte, an FWS senior biologist at the Green Bay National Fish and Wildlife Conservation office, presented an update to members of the Lake Michigan Citizen’s Fishery Advisory Committee at its September meeting in in Grand Haven.  Coded wire tag data, he said, showed Wisconsin-stocked fish showed up more frequently in the lakewide fishery than those stocked in Michigan waters. Anglers fishing at southern Lake Michigan ports caught Wisconsin-stocked salmon and some stocked at Manistee while northern Michigan anglers caught Wisconsin-stocked salmon and those stocked at southern ports.

“It may be their early life survival is higher,” Wesley surmised. “Chinooks leave rivers (in spring as young smolts) and feed along the beach in shallow water at first. But our (Michigan) waters are cold so nothing has started; there is no zooplankton or small fish. On the other side, because of the west wind, they can at least eat terrestrial insects and maybe enough to survive.”

Why Michigan’s wild salmon are caught more frequently the state’s hatchery salmon may be a matter of timing, Wesley said. Hatchery salmon are stocked when they are ready to smolt. They are reared in controlled conditions where schedules are not flexible. They may grow and develop faster than wild fish.

Wild salmon, by contrast, may be slower to develop. They too grow based on temperature and smolt when they are ready, but they may smolt later in the season when lake conditions may be more conducive to survival.