Upcoming deer season could be hit or miss

Posted on November 8, 2015 by Howard Meyerson

Grand Rapids, Mich – Hunters who plan to go out for the two‑week firearm deer season starting Nov. 15 need to get out and scout if they plan to hunt the woods. This year’s acorn crop is spotty, according to state wildlife officials. Deer will be moving and hunters will have to find them rather than assume their favorite oak stand will be productive.

“It’s an average‑to‑good year for mast, but it’s literally going to be a case of have and have-nots,” said Chad Stewart, deer management specialist for the Michigan Department of Natural Resources. “If you are fortunate to have white oak producing in your woods, sit around that tree. Or, if you have persimmons dropping, sit there. It’s just a matter of when you will see deer.”

Michigan’s deer herd, overall, is smaller than a few years ago. Three consecutive hard winters took a serious toll, particularly in the Upper Peninsula where most of the fawns died two of those winters. Epizootic hemorrhagic disease, or EHD, also hit the southern Michigan deer hard in 2012, killing many in various areas.

DNR surveys of hunter success showed it declined in 2014. Just more than five out of 10 hunters took home a deer. That decline was seen all around the state, but mostly in the Upper Peninsula, according to Stewart.

“The harvest up there was really low, the lowest it’s been in 30 years,” Stewart said. “The good news for U.P. hunters this year is those who see deer are seeing older‑age class deer. But they won’t see the numbers they have in the past. And, we don’t expect that to change overnight.”

Despite the bad news, there is good news, too. 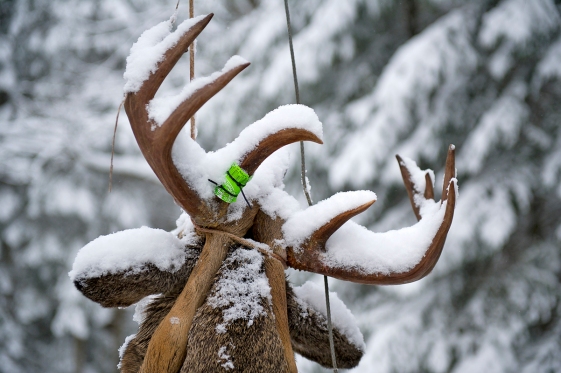 Field reports from around the state show many areas in the northern Lower Peninsula have older, 2 1/2‑year‑old bucks this year. The NLP deer harvest is expected to be higher than last year. Antler restrictions, limiting hunters to bucks with three antler points or more, were put in place 2013 for many NLP counties. As a result, fewer 1 1/2‑year‑old deer were shot in 2014. They have since matured.

“I’m optimistic that (northern Lower Peninsula) hunters will have a good year,” Stewart said. “There are good numbers of quality deer. It was a moist spring and summer, and that promotes antler growth. Our field staff has seen some nice bucks being taken (in the archery season).”

Southern Michigan hunters, many who hunt private lands, are going to benefit this year from the advanced corn harvest. It is ahead of last year, and more fields will be cleared come opening day. That means better and more deer sightings.

Chronic wasting disease, which was discovered in Meridian Township in Ingham County this year, seems contained. Only three deer were found infected, and all appear to be from the same family group. More than 1,100 deer have been tested so far. The big question hanging over its occurrence is how the disease got there in the first place.

“That’s a million dollar question. We have some suspicions,” Stewart said. “There are no deer farms in the area, and we are not looking at that industry as a potential cause. “We have some thoughts and those are being investigated by law enforcement. We do know the three deer that tested positive are (genetically) consistent with deer in Ingham County, which means the disease was brought in, but we don’t know how.”

Stewart said hunters can help with the CWD surveillance work in that region by reporting any deer they find that is acting strange. Ample information about CWD and what’s being done about it can be found online at bit.ly/CWDinfo .

Hunters who are fortunate enough to bag a trophy deer this year might want to consider entering it in the Commemorative Bucks of Michigan record book. The 34‑year‑old nonprofit maintains Michigan’s official records. The organization has 2,000 members, and more information can be found at buckfax.com http://buckfax.com.

The process of entering requires having the antlers measured and scored. Bob Novosad, a CBM scorer in Grand Rapids, said hunters need to let the antlers dry at room temperature for 60 days before they are measured. The cost is $30, and that includes membership.

“People with a nice buck always want to know their score right away, but we don’t do green scores, and they are not recognized,” Novosad said, explaining that this one‑time approach saves everyone time. Scorers need only to measure the antlers once.

So, if you happen to shoot a nice buck this season, check out CBM and see if it makes the record book. Be safe out there and happy hunting.

After more than 30 years in the outdoor writing business, you would think I'd know better.
View all posts by Howard Meyerson →
This entry was posted in Uncategorized and tagged Deer, Deer Hunting, DNR, Hunting, Michigan Department of Natural Resources, Wildlife. Bookmark the permalink.