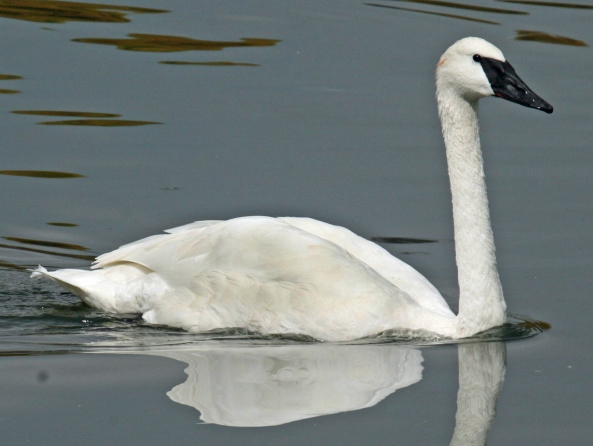 The Trumpeter Swan is one of several species that have been aided by Michigan’s Nongame Wildlife Program. Photo: Dick Daniels, Wikimedia Commons.

Perhaps you have heard about trumpeter swans, the beautiful all-white birds that once were plentiful in Michigan but then disappeared. They are the largest waterfowl species in North America and are readily identified by their long, straight neck and all-black bill.
Trumpeters are doing well today in Alaska, Canada and parts of the northern U.S. They have rebounded from near extinction after being hunted extensively for their plumage until the early 20th century.

In Michigan, they remain on the state’s threatened species list. But they are being considered for removal. More than 700 were counted in 2010, according to state wildlife officials.

“We consider trumpeter swans to be doing just fine and fully expect they will come off the list,” said Dan Kennedy, endangered species coordinator for the Michigan Department of Natural Resources.

The trumpeter — along with the peregrine falcon, another recovering species being considered for delisting in Michigan — could be a poster child for the exceptional recovery work that was accomplished by staff working in the DNR’s Nongame Wildlife Program. Since the program was created in 1983, along with the Nongame Fish and Wildlife Trust Fund, its purpose has been the management and protection of non-hunted species. That includes pine martins, Henslow’s sparrows, wood turtles and many others.

The Nongame Wildlife Program was prominent in the 1980s and early 1990s, but has

become less so in the past decade for a variety of reasons. Those include diminished funding and changes in wildlife management philosophy within the DNR; the agency adopted an ecosystem management approach that focuses on habitat work for all species, rather than just for one.

The program also was prominently displayed, until 2000, on every state tax form.
Taxpayers once were provided with an easy way to donate by checking off a box to allocate some, or all, of their tax refund to nongame work. It was replaced in 2001 with the somewhat obscure choice — the loon license plate. Anyone buying or renewing motor vehicle license plates can purchase one for cars and trucks. The proceeds help fund the program, but many people still do not realize what it does.

“We topped out in 2007. Since 2008, we’ve sold about 1,000 to 1,100 new ones a year and get about 18,800 renewals,” said Ann LeClaire-Mitchell, the DNR’s wildlife division program support section supervisor. “That number has been going down, because there are so many choices (of state license plates).”

DNR wildlife staffers now are examining how the nongame program might be revised to be more visible, effective and fundable.

Its budget is derived from trust fund dollars, license sales, cash donations and federal wildlife money. That totaled just less than $2 million in 2012, the same year game management efforts had $12 million or $13 million to spend.

What that means is how to bring it out of the shadows. To that end, the DNR is planning a 40-year anniversary celebration dinner for the state’s Endangered Species Act that is open to the public. The gala is December 9, from  5:30 to 10 p.m., at the Kellogg Hotel and Conference Center in East Lansing. Tickets are $100 per person. The keynote speaker is Carol Bocetti, the state’s Kirtland’s warbler recovery team leader, who will present an overview of the 40-year effort.

Details on how to buy tickets, the list of silent auction items and how to donate to the program all can be found here online.

Kennedy hopes to net $10,000 for the Nongame Wildlife Program, but more importantly, he wants to get the word out.

“Most of the funds go to help threatened and endangered species,” Kennedy said. “It is used to help rare species all across the state. And what we do for them helps nongame and game species alike.”

Michigan’s Nongame Wildlife Program was a gem in its heyday. That it was allowed to slip into obscurity is a shame, as is any accompanying lost ground. More important, however, is DNR wildlife staff now realize that and are working again to establish its public relevance in the wide and diverse world of wildlife management in Michigan.

If you enjoy nature, whether by watching birds and butterflies or by looking for frogs or photographing rare wildflowers and mammal species, keep in mind the Nongame Wildlife Program works to keep them all healthy.

If you have it to spare, consider making a donation yet this year.