Mushers like this one at the starting line of the Sweetwater Challenge dogsled event, would be able to train and run their dogs without concern about motorized vehicles on their trails in winter. Photo: Howard Meyerson

Michigan mushers eventually might get a long and safe trail system for running their dogs and for training in the Huron-Manistee National Forest. A Forest Service proposal to close about 3.5 miles of National Forest roads in winter to create a non-motorized winter recreation area for mushers, skiers and snowshoers is moving forward.

National Forest officials with the Baldwin/White Cloud Ranger District said a decision about the project is expected this winter. The public comment period closed Oct. 24, and a draft environmental assessment now is in circulation. It has a 30-day comment period, which is followed by a 45-day objection period. A link to the project can be found at bit.ly/sweettrail.

The road closures would occur in Sweetwater and Webber townships, where the popular 25-mile Sweetwater Challenge sled dog race has been run since 2006 under a special permit each time the race has been held. Mushers contend that a non-motorized winter recreation area there would allow them to run their dogs without worry during the winter.

The area has a mix of forest roads, county roads and trails that cross National Forest and private lands. It is a snowy region popular with mushers. Nearly 350 showed up in 2013 for one scheduled event. They arrived in the Manistee forest from as far away as Oregon, Vermont, Georgia and Minnesota, according to National Forest officials.

“(If approved), we expect it to go into effect this winter,” said Kathy Bietau, the National Forest District’s recreation planner. We’re looking to provide a safe environment for permitted sled dog events and for skiers and snowshoers. We’re proposing to close the roads to motor vehicles (every winter) from Dec. 1 through March 31.”

A little something for everyone

County roads, she said, would stay open to motorized traffic. Snowmobiles would continue to use the designated snowmobile trail on the east side of the area, and only certain forest 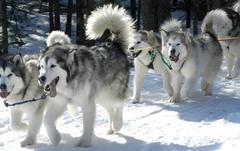 roads would be closed. Those are the narrow two-tracks, 16 feet wide and often banked with snow, where it is unsafe to run sled dogs if big trucks or snowmobiles also are traveling the trails.

“Big trucks come down those roads and create big ruts. They really tear it up, and those ruts can’t be groomed out,” Bietau said, explaining the ruts make it tough to safely run a team of dogs at full-speed. “It’s turned into a huge mess (in the past), which made it more difficult to hold dog sled events or use it recreationally. Mushers want this to become a winter non-motorized trail for sled dogs and other uses. There aren’t any designated sled dog trails in Michigan.”

Michigan mushers long have hoped for a dedicated trail on public forests in Michigan. Equestrians have them, as do hikers and mountain bikers. Snowmobiles, motorcycles and off-road vehicles have them, too.

Mushing events also are staged at Fort Custer State Park near Augusta, between Battle Creek and Kalamazoo, but snow conditions there often are unreliable. Events also are held at Clear Lake State Park in Atlanta. Others are held at private summer camps, but access can be uncertain from year to year. And running on snowmobile trails can be risky, not to mention noisy, according to mushers and snowmobilers.

“It’s getting harder and harder to find places to run dogs, and cross-country ski trails don’t allow dogs on them,” said Linda Lange, president of Michigan Dog Drivers Association. “(Mushers) are a very underserved group on the forest, and we don’t want to run snowmobile trails because of the danger.”

Mushing on ruts is nuts

A dog sled thaws in the sun during Sweetwater Challenge. Photo: Howard Meyerson

years. Last January, I got really concerned about a Great Lakes Sled Dog Association race that was held here (on the Sweetwater Trail). They run at speed, and you can’t have trucks’ ruts in the trail when you have to maneuver around them at 20 mph,” Lange said.

Lange is pleased to see the non-motorized winter recreation area proposal moving forward. Her organization sponsors the annual 25-mile Sweetwater Challenge, which next is scheduled for Jan. 17-18. Her group’s focus has been on providing mushers with “mid-distance” races and training that prepares them for long-distance events, such as the U.P. 200, a qualifying event for the Iditarod in Alaska.

That preparation, she said, requires spending more time on the runners, covering miles in challenging terrain. Most of the other events held at state parks and camps are short-distance sprint events.

Bietau said the current proposal does not formally designate the trail as a “mushing trail,” but it will create a non-motorized winter area where mushers, skiers and snowshoers can get out and enjoy a quiet natural landscape in winter. The closed roads would be off-limits to motorized traffic for the winter, but motorized use would resume April 1 each year.

Michigan mushers have been looking for an area where they can regularly train and run since the 1990s. Having an area near snowy Baldwin that is easy to access for Michigan and out-of-state mushers — a place that will be groomed and maintained by volunteers — hardly seems too much to ask. And, frankly, it is long overdue.