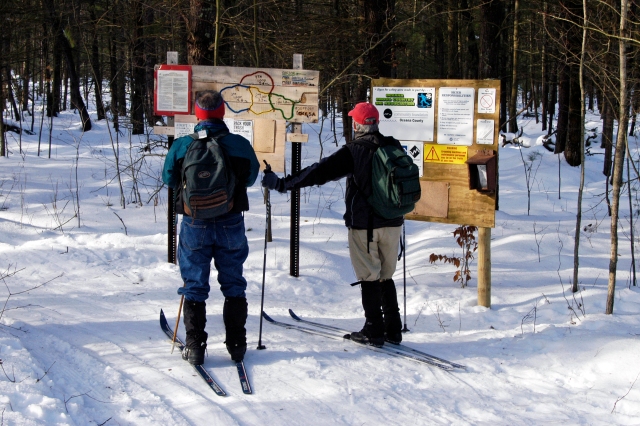 Pack a lunch, some extra clothes and some glide-wax on a long trail ski. Photo: Howard Meyerson

It was cold and the snow was fresh and deep; the cross-country skiing should have been terrific. But, as I shuffled along through the woods one day recently, it felt as though I was skiing in molasses. No joyful kick and glide for this cowboy.

You might think I’d know better, having made the same mistake last year. In my haste to get out for the first ski of the season, I hadn’t taken the time to apply a glide wax to my skis.

The result was predictable: lackluster performance. I’d glide two feet with each kick rather than four or five. I was slow schussing down hills and worked harder to get where I was going. That meant expending much more energy over several miles.

Five minutes spent waxing before I left would have made a big difference.

Glide waxing is one of the more important steps for enhancing ski performance on the snow. It doesn’t matter whether you ski waxable or no-wax skis.

I ski waxless skis most of the time as do most people across the U.S. But a misnomer is that no waxing is required.

Technically, it’s true: No-wax skis have a textured surface underfoot that grips the snow and eliminates the need to apply one or more kick-waxes for grip. And, unwaxed boards do slide over snow, while gravity will pull a skier down a hill. But a skier’s speed and distance can be greatly improved by applying some glide wax to the tips and tails.

Racers who worry about every tenth of a second often go the route of expensive iron-on waxes, but most recreational skiers will do just fine with simple-to-apply glide waxes. No tools are needed. Just daub it on.

Applying glide wax to the tips and tails of no-wax skis will enhance their peformance. Photo: Howard Meyerson

The waxes come as bottles of liquid or small containers of paste. Two popular brands are F4 by Swix and MaxiGlide. I’ve used them both and both work well. My skis were faster and I moved for freely.

Waxing simply entails applying the wax to the tips and tails, letting them dry, and buffing them out with a rag. The application takes five minutes at most. Glide waxes not only improve ski performance, but they help minimize snow build-up underfoot, one of the more frustrating situations that can stop you dead in your tracks.

I typically apply glide waxes to the entire ski, from the tip to the tail, including the kick area, being careful not to get a heavy buildup in the kick-zone underfoot. That textured surface is important for grip. If I know I will be out for a long day, I may apply a second coat or carry it with me in a small Ziploc bag which takes up little room in my pack.

Most glide waxes have to be reapplied through the season. How often depends on the snow and trail conditions, how often you ski and how far you go. It’s not uncommon to reapply it before every trip out.

If a more durable wax finish is preferred, consider the iron-on variety – that requires a few tools at home or a visit to area ski outfitters who will do it for a fee.

Frankly, I am not sure the extra work is worth it, but I will periodically have a shop apply a hot-wax to my skis.

A can of fluorinated Swix F-4 paste runs about $16. The added fluorocarbons make it faster than without. F-4 is available as a roll-on and as an aerosol. Maxiglide also has a fluorinated version of its venerable glide wax, now sold as Maxx-Waxx. It runs about $14. Either can be found at area ski shops or purchased online.

If you buy one or the other just remember to use it before you head out this winter. You won’t be sorry. It’s case of do as I say, not as I do.

After more than 30 years in the outdoor writing business, you would think I'd know better.
View all posts by Howard Meyerson →
This entry was posted in Uncategorized and tagged Cross Country Skiing, Howard Meyerson, ski performance, Ski wax, Skiing, Trails. Bookmark the permalink.