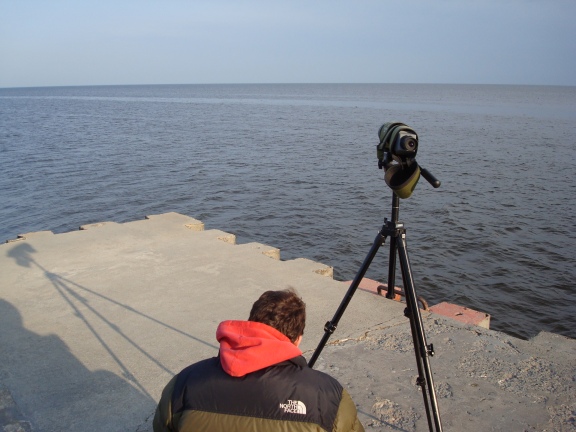 The view that most birders see of Adam Byrne; the state’s leading eBirder concentrating on finding the next rare bird. Photo: Caleb Putnam

Adam Byrne has ruffled a few feathers over the years. The 42 year old secretary for the Michigan Bird Records Committee has had to say ‘No’ to more than one birder submitting a sighting to the committee of experts that vets them.

Their documentation has sometimes been lacking, he said. And as a result, it doesn’t get listed, often to the dismay of an indignant birdwatcher.

“People see it as a judgment thing,” said Byrne, who chaired the committee for several years. “It’s ‘How dare you question what I saw.’

“But, that’s not what we are doing. I’ve taken the brunt of it for the records committee, but I’m not losing sleep over it either.”

Focused, hard-working, and keen-on-accuracy are all terms that describe Byrne who

lives in DeWitt with his wife Jan and their three children.  He is the chairman of the research committee for Whitefish Point Bird Observatory and the Michigan eBird reviewer, in essence the gatekeeper for Michigan submissions to the international data base managed by the Cornell Laboratory of Ornithology in Ithaca, NY.

Byrne’s friends and colleagues know him as a bird “chaser.” It is not unusual for Byrne and others to pile into a van at a moment’s notice and then drive all night to see an unusual species reported in the western Upper Peninsula.

His Michigan list of bird sightings has 398 species out of 444 known in the state. It is the longest list on record. Byrne also holds the Michigan Big Year Record, having sighted 329 bird species in 2005.

“He’s a controversial guy,” said Caleb Putnam, the Michigan Important Bird Areas coordinator and a personal friend. The two have spent many days bird watching together. “What he really cares about is that the ornithological archives are really accurate. And he’s as qualified a person as we have in the state.

“No one would put as much effort into it as Adam.  But he takes a hardline approach and that sometimes rubs people the wrong way.”

Byrne’s birding interest took flight while in junior high. His seventh grade science teacher, Ben Blazier, offered extra credit for going with him bird watching.  Highly motivated to succeed, Byrne took him up on the offer.

“He had a knack for working with troubled kids and I was not one of those kids,” said Byrne, a plant pathology research assistant at Michigan State University. “I was a book-nerd and (later) a valedictorian in college, but he gave me the opportunity to get out and see birds I never knew existed. I started keeping lists and it kept growing. ”

Byrne’s grandmother, Elsie Deeb, now 92 years old, proved a crucial figure in the development of what Byrne calls his “passion.” She was his birding companion for many years and lives with Byrne’s parents at their Davisburg home. As a young man he watched her feed birds in the yard.

“I was 13 to 14-year-old kid without a driver’s license who wanted to go around the country and see birds,” Byrne said. “My grandma would do it. Weekend after weekend she would drive me all over the state. When I graduated from high school she took me to England and Scotland on a Michigan Audubon trip. We birded around Wales and Scotland. It was just awesome.”

Byrne went on to Cornell University where he earned a bachelor’s degree in natural resources and later a master’s degree in entomology from MSU. His time at Cornell was filled with bird studies, research, and competition. Students at the university were aggressive and highly motivated bird watchers.

All about the game

“When I was younger it was all about the game, what would make me the best: more birds and bigger lists,” he said. “But fortunately, as I got older, I was surrounded by really good birders. I realized they weren’t doing it out of competitiveness. They were doing it to get out and enjoy the birds and that totally changed me.”

Putnam chuckles at that statement, knowing Byrne perhaps better than he knows himself.

“That’s laughable,” Putnam said, playfully mocking Byrne. “He’s the most competitive person I’ve ever met. He’s going to die with the highest state list ever. I have 354 species on mine and I will never beat him.”

Jan Byrne, his wife for 17 years, said her husband has been dedicated to birding as long as she’s known him. He asked her out while the two were students at Cornell. The date proved a bit of a shock: bird watching, of course, at the local landfill.

Byrne said he now directs his competitive urges to those he likes to trounce on the basketball court in pick-up games a few times a week.

“I mean I am competitive, I don’t like to be eked out by anyone,” Byrne said. “But to me the game part of birding has become secondary. It’s more about friendship and camaraderie.”

Family life is top priority for Byrne. He speaks with relish of spending time with his wife and children, 15-year-old Jason, 10-year-old Caitlyn and 4-year-old Kylie, who wants to see a snowy owl. Jan Byrne has gotten used to him running off at any hour to chase rare birds. She also knows his hard-nosed side.

“He’s not afraid of conflict and he is always fair,” Jan Byrne said. “He has a very strong sense of ethics and is all about right and wrong. He is competitive. He gives 150 percent if he does things, or not at all. But when I say that it’s not necessarily against other people as much as competing with himself.”

Byrne’s friends have taken to calling him: “Birdman.” And perhaps with good reason: Adam Byrne’s eyes are fixed squarely on the number 400; his goal is to have his Michigan list break that milestone soon.

This feature appears in the Spring Birding Issue of the “Jackpine Warbler,” published by  Michigan Audubon Society.