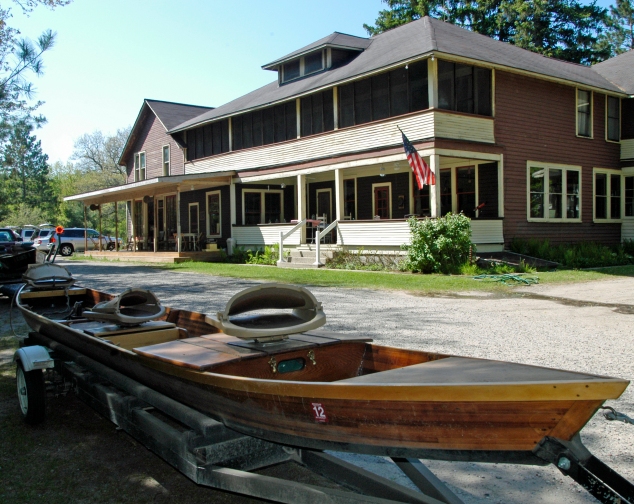 LOVELLS, MI — Maybe you are looking for something new, a different way to enjoy the trout fishing season that opened Saturday. Michigan trout fishing history is rich with stories of bygone days, back when lumbering was in its heyday, when people took trains north from the cities to fish and when grayling swam in northern Michigan streams.

The lore of one classic Michigan trout stream, the AuSable River, is alive and well in the town of Lovells — population 626 — home to the Lovells Museum of Trout Fishing History. Make a stop there, and you can get an eyeful of this most famous river.

The museum, which features a rod-building display this season, showcases 100 years of life along the north branch of AuSable River. Its storied waters once were the playground for rich and famous industrialists such as Harvey Firestone, Thomas Edison, and Henry and Edsel Ford. The native brook trout and brown trout population still draws anglers from all over the country.

Just this weekend, the little town put on its annual trout season opener festivities. If you

Brig brown trout like this can be found on the AuSable River north branch. Photo: Howard Meyerson

are looking for a cool place to stay, something other than a cheap motel or dusty campsite along a river, you might consider treating yourself to a stay at Fuller’s North Branch Outing Club also in Lovells.

NBOC is an early 20th-century inn that has been converted into a bed and breakfast for anglers and others. It’s a visit you won’t forget.

“I have people here from all over,” said Judy Fuller, the proprietor. “They come because it is the north branch, one of the top trout streams in the nation. It’s on their bucket list, and they want to fish it.”

Fuller and her late husband bought the place in 1996, spent two years restoring it and reopened it in 1999 after 40 years of it being closed.

A stay at NBOC is synonymous with good times. It is a full-service fishing lodge with a fly

shop and guides. Mornings are spent mingling with other anglers at the breakfast table, where a sumptuous meal starts the day.

The Inn was built in 1916 by Thomas Douglas, a local entrepreneur who promoted it as a

base for sporting pursuits. It became home to the North Branch Outing Club, the high-brow group of dignitaries that once enjoyed its amenities. The name since has stuck, as has its more modern clientele now.

It is a cozy and warm abode with ample sitting rooms and porches offering visitors a trip into the past. It’s a great place to spend a weekend or a week. Anglers can wet a line on its 400 feet of north branch footage while waiting for their guide to finish up tying the day’s flies. Relaxing on the porch late in the evening doesn’t get much better.

More to choose from

Fullers is just one of a few neat fishing lodges around Michigan — places where trout anglers can relax and soak up the timeless ambiance that comes with fishing classic waters.

Also on the AuSable is Gates AuSable Lodge, another must-see for many Michigan trout anglers. The establishment dates back to the 1940s when it was first constructed as a family tavern and dance hall.

The late Calvin and Mary Gates bought it in the 1970s and expanded it, adding rooms. It grew to be a full-service lodge with fly shop, meals and guides in 1978.

Most today know it as the home base for the late Rusty Gates, and his wife, Julie, who took it over when his father, Calvin, died. Rusty became a Michigan icon, an avid angler and ardent activist for the cause of clean trout waters and preserving the AuSable River’s special character. The lodge is now operated by  Josh Greenberg who bought it in 2012. Like NBOC, it has a long and dedicated following among trout anglers.

If you are inclined to fish the Pere Marquette River, give some thought to the Pere Marquette River Lodge in Baldwin, operated by Frank Willetts. The PM Lodge doesn’t have the history of the AuSable establishments, but it is a comfy, full-service operation with guides and a Orvis fly shop. The north woods lodge there has 10 rooms that come with a continental breakfast. Special arrangements can be made for other meals. The establishment also offers cabins and houses along the river.

“We get people from all over the world staying here,” Willetts said. “During peak seasons, they are here to fish, but in the summer, we also have canoers, kayakers, golfers and mountain bikers.”

Barothy Lodge, in Walhalla, is yet another option on the Pere Marquette — a unique property that began as a hunting and fishing camp in late 1800s. It since has been expanded to become more of a resort with multiple residences for rent.

Anglers staying there can fish the river directly or arrange for guide services with pick-ups at the lodge. Barothy’s is a good alternative, complete with tennis courts, a swimming pool and other amenities for those who enjoy cooking their own food or for couples on getaway trips.

It is trout fishing season again in Michigan, and there are an ample number of cheap hotels to choose from. But if the season finds you in a mood to try something different, give one of these historic fishing lodges a try. I guarantee you won’t regret it.