River Restoration: Is it Good for Birds?

Great Blue Herons don’t disappear when rivers are restored, but they may be harder to see. Photo: Andrea Westmoreland.

When Doug Klein goes birdwatching along the Thornapple River near Nashville, he often is pleased about what he finds. Birds are numerous, particularly at the nearby Nashville site where a 155-year-old dam stood until 2009, when it was removed.

Wet meadows now grow upstream, an area formerly under water. Wetland birds visit marshy areas and waterfowl are plentiful in the river. For Klein, an avid birder and eBird  lister, Nashville is a very productive spot.

“It’s a pretty nice place to go,” notes Klein, a mechanical engineer and Hastings resident. “Fifty-nine species have been reported there on eBird. I’ve seen 57 of them. We see Trumpeter Swans, Rusty Blackbirds, various songbirds, and Sandhill Cranes. One good find last May was a Philadelphia Vireo. Those are getting hard to find. On some mud flats you might see Killdeer or Lesser Yellowlegs. It’s an interesting place to find a variety of birds.”

Aging dams around Michigan are being removed with regularity. Some are torn down to improve fish passage, or to reduce water temperatures for species like trout. The Nashville Dam was removed to improve water quality for warm water fish. Others are demolished because they outlive their purpose and may be expensive to repair and maintain.

No matter what the reason, proponents of dam removal maintain that river restoration is good ecologically. Allowing a river to resume its natural flow, depth, and width yields benefits for fish and stream organisms, for animals in the area, and for regional biodiversity. Yet some birdwatchers say they worry when dams come down, when impoundments are drained, and when the landscape is radically altered. Flooded areas provide homes for important or favored bird species.

American Woodcocks are becoming more abundant along the Boardman River upstream from where the Brown Bridge Dam was removed. Photo: Dan Behm.

“There are several dams that maintain lake levels in the north,” explains John Mesch, a Grand Traverse Audubon Club member. “Lake Dubonnet in Grand Traverse County exists only because of a dam on the upper Platte River. This lake is almost entirely in the Pere Marquette State Forest, and supports multiple loons, Ospreys, eagles, Red-tailed Hawks, warblers, and many other bird species. Removal of this dam would be tragic.”

Natural resource managers, ecologists, and river restoration professionals acknowledge the change can be dramatic, but most say few if any ill effects follow. Most water-oriented birds simply fly away and relocate elsewhere while new species move into the area.

“We see birders and other nature enthusiasts sometimes struggling to understand or appreciate dam removals,” notes Brad Jensen, executive director for Huron Pines, a conservation and resource development nonprofit in Gaylord, which coordinated removal of the Song of the Morning Yoga Retreat dam in the Pigeon River Country State Forest. “They watch nature so closely that when they first see the changes (after a dam removal), they have a hard time with not seeing species that they always have. The change isn’t bad. It’s just different. And I’d argue that it’s better in the long run.”

Little research has been done in Michigan examining how birds fare when dams come down. It’s a topic that “screams master’s thesis,” according to Patrick Ertel, an avid birder and resource analyst with the Michigan Department of Natural Resources. Ertel administers state natural rivers and stream restoration projects like that on the Boardman River, where the Brown Bridge Dam was removed in 2013.

“The Boardman is a perfect example,” Ertel notes. “People envision mud, but that mud is there only for one season. It may look desolate today, but it greens up quickly and new species will use it. I cannot dispute that there will be less open water for waterfowl. People who oppose dam removal say ‘It will be dead. Where will the herons and Osprey go?’ I say it’s not dead. It’s just different. I was astonished at how quickly aspen moved into Brown Bridge (after the pond was drained). Now I think of all the little shorebirds that will bounce around the edge of the river.”

River restorations create diverse bird habitat, according to Ertel. The 190-acre Brown Bridge Pond was a habitat monoculture. The public, he notes, is often unaware of the benefits that follow. They look upon the change as a loss.

“It’s easy to look out on a pond and see hundreds of birds. It’s hard to look into cattails, tag alders, and other vegetation and see that the birds are still there,” Ertel explains. “It pulls at the heartstrings to see where the duck used to sit. It’s not that a heron won’t wade where a dam comes out—it just will be harder to see.” 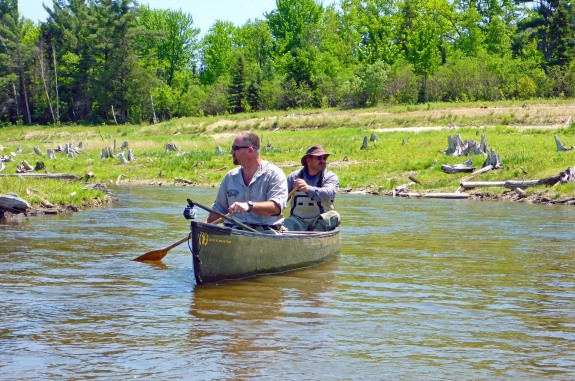 Brett Fessel (front) and Frank Dituri (rear) paddle down a greening segment of the Boardman River that was underwater a year earlier, before the Brown Bridge Dam was removed. Photo: Howard Meyerson.

Brett Fessel, a river ecologist and restoration section leader for the Grand Traverse Band of Ottawa and Chippewa Indians, suggests concerns that surface are often more social than biological; they are expressions of an individual’s values, aesthetics, and preferences. On the Boardman River where he works, and where pond conditions were changed to riverine with flood plains, he has already noticed change. The exposed area was heavily planted with trees and vegetation. It will mature over the years and go through predictable stages of forest succession.

“We see more Wood Ducks now than in the past, more mergansers too, and tons of Mallards,” Fessel said. “We see the same eagle occupancy and some shorebirds like Killdeer and plovers. If anything I expect the number of herons to increase, and kingfishers. I am also seeing more raptors. Warblers will use it once it matures. Right now it’s highly productive for woodcock that wouldn’t have been there when it was covered with water.”

“For people who live on these ponds, it’s a beautiful thing to hear loons calling. It’s a special feeling, and when it goes away it’s not good. The same is to be said for Trumpeter Swans that nested and produced young. They flew out of the valley and I haven’t seen any back in the river, but I am certain that they found somewhere else to nest and reproduce.”

Appears in the summer issue of Jack Pine Warbler, Magazine of  Michigan Audubon.