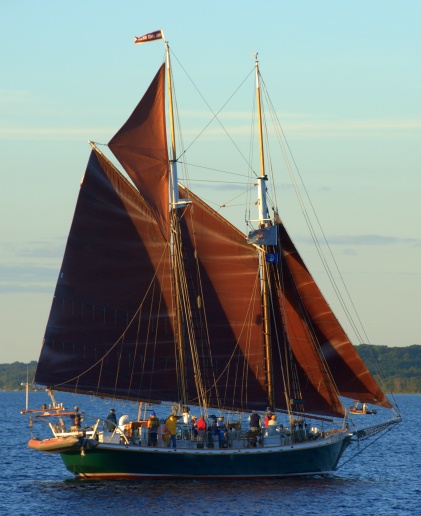 When the schooner Inland Seas slips her berth at Suttons Bay on June 24, her captain, crew and passengers will share in a voyage of discovery—a two-hour educational journey under sail to learn about microplastics, an emerging environmental problem that ills the Great Lakes.

The two-year-old program, called “Exploring Microplastics,” is offered by the Inland Seas Education Association (ISEA), a nonprofit that teaches Great Lakes science aboard the 61-foot schooner. Its passengers will examine what crew members find while conducting a fine-mesh trawl for plankton. They will learn how tiny plastic particles enter the food chain and a lot more about how microplastics foul Great Lakes waters.

“We find plastic in all of our samples,” Williams notes. “Mostly we find fragments, but we find film (plastic bag pieces) and fibers.” 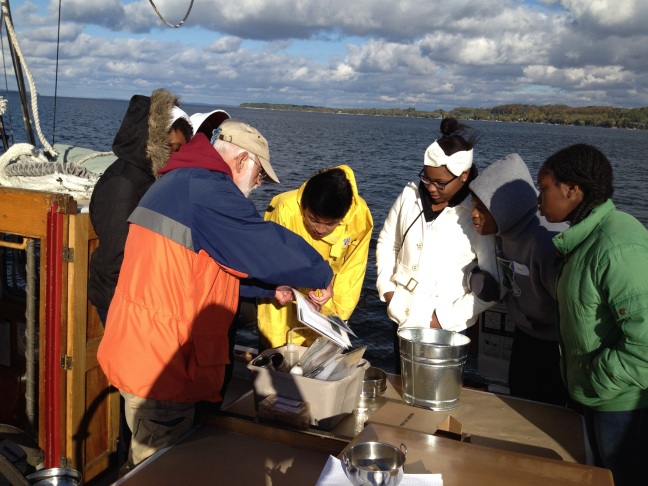 Students learn about the Great Lakes while under sail. Photo courtesy of ISEA.

Microbeads, the tiny plastic particles found in toothpastes, cosmetics and exfoliates, became a national environmental priority last year when the U.S. Congress passed the Microbeads-Free Waters Act of 2015. That law bans the manufacture and sale of products that contain them in three phases starting July 2017.

For several years leading up to the decision, microbeads were considered the foremost plastic pollution problem on the Great Lakes, but scientists now recognize the problem is much larger. The Great Lakes and its tributaries are literally awash with plastic pollution, from microscopic in size to those readily seen with the naked eye. Researchers are now zeroing in on microplastic fibers, synthetic threads that shed in the wash from fleece or other garments, along with tiny pieces of fishing line that anglers leave behind.

Synthetic fibers present a problem without easy solutions. Precisely where they come from and how they get into the lakes is not well understood. Unlike microbeads, which can pass through many wastewater treatment plants, microfibers are often captured. Yet, they too wash into the Great Lakes every day and threaten birds, fish, and other aquatic species by fouling digestive systems or transporting toxic chemicals that can adhere to their surfaces. Scientists know the potential exists for those chemicals to bio-accumulate as smaller creatures are eaten by larger.

“What’s interesting about Lake Michigan is we’ve found a lot more microfibers than microbeads,” offers Dr. Sherri Mason, professor of chemistry at State University of New York at Fredonia, whose 2012 and 2013 Great Lakes plastic pollution studies were often cited in Congressional and other policy discussions leading to the microbead ban.

Mason said her findings showed that the volume of plastic found increased as water flowed from one Great Lake to another—as though pouring one bucket of plastic particles into a second. Her 2012 survey of Lakes Superior, Huron, and Erie found an average of 43,157 plastic pieces per square kilometer. Ninety percent of the plastic was found in Lake Erie, where concentrations reached more than 1 million particles per square mile, and plastic microbeads dominated. Her 2013 study of Lakes Michigan, Erie, and Ontario found comparatively few microbeads and far more microplastic fragments.

“The majority of what we found in Lake Michigan is classified as fragments,” Mason said. “Second most prominent was microfibers and then little pieces of fishing line left behind.” 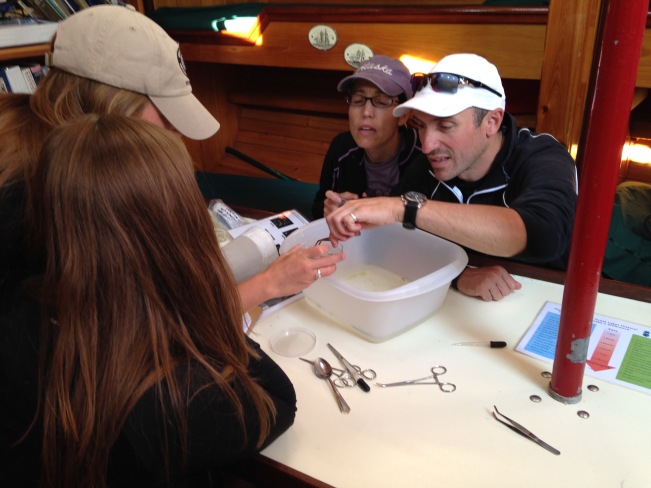 Plastic beads and fibers are collected and sorted below deck. Photo courtesy of ISEA.

Austin Baldwin, a hydrologist with the U.S. Geological Survey Wisconsin Water Science Center, said he was surprised to find that microbeads comprised only 1 percent of the particles found in his 2014 study of 29 Great Lakes tributaries. His research, funded by the Great Lakes Restoration Initiative, found microplastics in every tributary studied. Their concentrations were 10 to 100 times higher than found in the Great Lakes. And fibers dominated, making up 71 percent of the plastic collected.

“We were very surprised,” Baldwin said. “We expected to see a lot more of the beads. The source of the fibers remains somewhat of a mystery. We saw no relation between their concentration and land use, or in wastewater or run-off. That raises some interesting questions about where they are coming from. One recent Paris study confirmed that atmospheric deposition of microplastic fibers occurs in both dry and rainy periods. But how are they getting into the atmosphere? That hasn’t been studied much.”

Baldwin continued, “One interesting takeaway from the study is the dominance of fibers, and that microbeads aren’t the only problem. Another is these fibers are settling into the Great Lakes and what are the implications for benthic (bottom-dwelling) organisms? A lot of studies show filter feeders like oysters are heavily impacted, and show decreases in reproduction because of microplastic ingestion.”

Baldwin and Mason have examined only larger particles, those 300–333 microns and larger. Studies of smaller particles show much higher concentrations in water samples, according to Baldwin. Some are so small they don’t need to be eaten to become a problem. They can pass directly into the cells of an organism where “a large pellet goes in and passes out 12 hours later.”

Microplastics are known to make their way into the food chain. A 2013 study about plastic ingestion by Flesh-footed Shearwaters published in the journal Environmental Pollution states: “By the mid-1990s more than 111 (35%) of the world’s seabird species had been recorded with plastic in their stomachs.” That ingestion by seabirds caused a number of problems from starvation to suppressed growth rates and damage to the gut, among other things. Mason said her studies sampled 29 Great Lakes fish species and Double-crested Cormorants.

“In every single species we found plastic. Cormorants had the most of everything, like an average of 35 particles per bird,” Mason said. “All across the species it is largely fibers we are finding. The reason they are retained is they are woven into the gastro-intestinal tract where fragments and beads tend to be excreted. We know it is in the food chain, but we don’t ultimately know what impact it is having.”Mason has received a grant to do research on food-web to learn more about that impact.

Williams, whose Lake Michigan water samples are sent to Mason for analysis, said her program is designed, among other things, to raise awareness so people become better Great Lakes stewards.

“It’s eye opening for adults,” Williams explained. “Many are totally surprised. They have no idea that a product they bought contains microplastics. We had one woman [on board] who works for a company that uses it. She said ‘We wash the wastes down the drain.’ She was shocked to learn they were polluting the waters. We hope our program will empower people to make different choices.”