Predator-Prey study: Wolves not threat to deer you may think 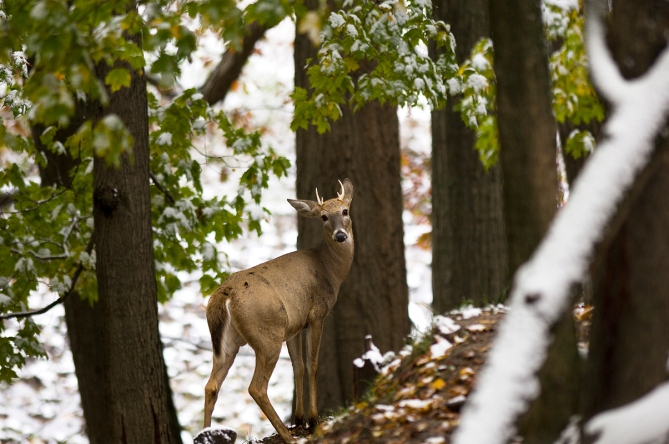 In the snowy woods of the western Upper Peninsula, wildlife researchers are learning a thing or two about deer survival: what preys on adult whitetails and fawns — and what else contributes to their deaths.

Some in the hunting community presume the answer is wolves. Many know harsh winters take a toll. Both are true, according to recent research, but a lot depends on other factors, such as the availability of young forests and food, predator density, and what other prey are available.The study, started in 2009 by Mississippi State University and the Michigan Department of Natural Resources, has turned up some surprises.

“We’ve been surprised by a few things in Phase I (low‑snow study),” notes Dean Beyer, a researcher with the DNR. “We learned that adult does were avoiding core wolf areas and that coyotes were avoiding them, too. That put coyotes and does in the same area, which probably resulted in a greater mortality by coyotes. And we were all surprised by the rate at which bobcats killed fawns. The rate is much higher than other species.” 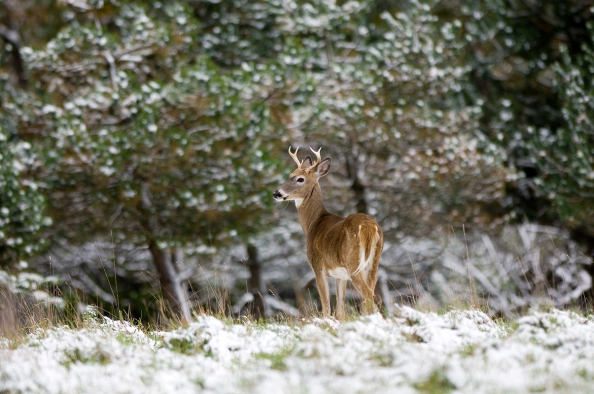 The study, known as The Predator Prey Project, is a three‑phase endeavor that examines ecological interactions in low‑snow, moderate‑snow and deep‑snow regions of the western U.P. The answers are being derived by tracking deer fitted with radio‑ telemetry collars and predators fitted with GPS collars. The low‑snow work wrapped up in 2011. The moderate snow work is slated to finish this year. Then three years of deep‑snow work will begin, provided funding can be found. Two Phase I findings are particularly interesting.

Beyer suggests the proximity of coyotes and deer boosted those mortality numbers. Wolves in the low‑snow zone were often feeding at livestock carcass dumps.

“Coyotes in Phase I were the biggest and most important predator of fawns and adult does,” Beyer said. “In Phase II (the moderate snow zone) coyotes cause the most total mortality of fawns, but when we look at adult deer, wolves jump up to No. 1; I think because they don’t have the livestock carcass dumps.”

The winter season also has an impact, according to the report: “Adult female mortality was greatest during winter (44 percent of those deaths), followed by spring/summer (37 percent), and fall (19 percent).”

Winter severity, which can hinder a deer’s ability to move around and feed, in turn can affect fawn size at birth. A 2.‑pound reduction in a newborn fawn’s weight can increase mortality by 11 percent, the research shows.

“Phase II has been interesting because we have had some very severe winter conditions,” Beyer said. “A couple of things jumped out. In 2013, (adult) doe survival was 58 percent, which is on the low end of things. In 2014, when we had even more severe weather, doe survival was 38 percent — some of the lowest survival rates I’ve seen in the literature. Those conditions stressed the does, and the fawns were born in poor condition.

“We pretty much lost the fawn crop in 2013 and had fairly low fawn survival in 2014, when 11 percent of the fawns survived.”

For those who remain certain that Michigan wolves will decimate the deer herd, Beyer suggests it is unlikely. The two species, he says, have evolved together, and other factors influence outcomes. Habitat and predator densities are just two. Then there are predator’s energy needs. Coyotes, for instance, are more likely to kill fawns while wolves are more likely to kill adult does. They need more meat/fuel to sustain themselves.

“What we know from the scientific literature is there are only two reports where wolves are believed to have contributed to a substantial reduction of deer … winter weather is still the driving factor, even in the low‑snow zone,” Beyer said.

After more than 30 years in the outdoor writing business, you would think I'd know better.
View all posts by Howard Meyerson →
This entry was posted in Uncategorized and tagged Conservation, Deer, DNR, Hunting, Michigan Department of Natural Resources, Nature, Wolves. Bookmark the permalink.

7 Responses to Predator-Prey study: Wolves not threat to deer you may think