Conflicts between wolves, hunting dogs in Michigan decline in 2015

Grand Rapids, Mich. – Michigan’s 2015 bear hunting season ended in October with fewer incidents than last year of hunting dogs being attacked by wolves. Only three attacks were reported to the state, down from 17 in the 2014 season, state wildlife officials said.

“It’s tough to speculate about why,” said Kevin Swanson, wolf and bear specialist for the Michigan DNR. “Livestock depredation reports are down too. We had 23 of those last year and only 11 so far this year. It’s possible that wolf numbers have declined, but we don’t know that and plan to do a wolf survey this winter.”

Michigan’s wolf population was last tallied in 2014. The DNR survey showed a minimum of 636 wolves in the Upper Peninsula. There were approximately 125 wolf packs with an average of 5 wolves per pack. Twenty-three packs were known to be pairs of wolves. 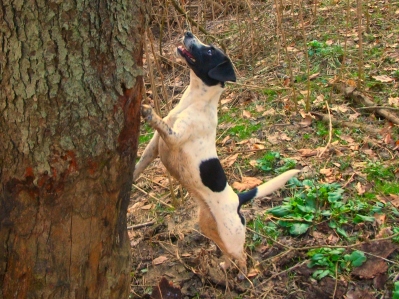 Bear hounds that work far from the hunter were the breeds most attacked by wolves, but beagles hunting rabbits were also attacked. Photo Wikipedia.

One wolf also has been confirmed in the Lower Peninsula’s Emmet County. Its tracks and scat, along with trail camera photos, were found by Little Traverse Bay Band of Odawa Indian biologists last March. The finding was confirmed by the DNR in September.  A second set of tracks also was found.

It was the second genetic confirmation of wolves in the Lower Peninsula since 1910, Swanson said.  The first occurred in 2004, according to published reports, after a coyote trapper in Presque Isle County accidentally killed a gray wolf.

“It seems there were two wolves (in Emmet County), but who knows where they are now,” Swanson said. “We’ll be doing a survey this winter and reaching out to the public to detect wolves in the northern Lower Peninsula.”

Cattle attacks down too

The 11 livestock depredation incidents this year include one pig and 10 cattle. That number has not changed since it was reported here in August. There were 43 incidents in 2014, of which 23 involved cattle and 17 dogs. The majority of the dogs were bear hounds, but beagles hunting snowshoe hares were also attacked.

Bear houndsmen have reported seeing fewer signs of wolves this year, according to Swanson. Fewer wolf tracks and scat have been seen.

“It is possible we are seeing a decline in wolf numbers,” Swanson said. “Deer numbers are down and deer are the primary prey of wolves. If their numbers decline considerably we can’t sustain the number of wolves we’ve had. It’s hard to know, but the indicators are there. Fewer depredation incidents are one, and seeing less sign is another.”

All three wolf/dog attacks this year involved bear hounds. Swanson said bear dogs are often quite far away from their owners, leaving them susceptible to an attack, unlike bird dogs which range much closer to their owner.

“There may be other reports (of attacks) that we don’t get,” Swanson said. “That’s why we ask all hunters to report any kind of depredation.”

After more than 30 years in the outdoor writing business, you would think I'd know better.
View all posts by Howard Meyerson →
This entry was posted in Uncategorized and tagged Bears, Conservation, DNR, Gray wolf, Hunting, Hunting Dogs, Michigan Department of Natural Resources, Nature, Wolf, Wolves. Bookmark the permalink.

3 Responses to Conflicts between wolves, hunting dogs in Michigan decline in 2015