DNR proposes to liberalize fishing on Lake Gogebic and other waters 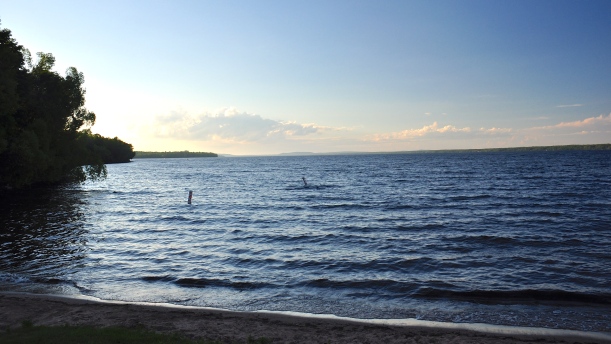 Grand Rapids, MI – Anglers who enjoy fishing for walleye on Lake Gogebic in the western Upper Peninsula, will be able to keep some smaller ones if proposed rule changes are approved by the Natural Resources Commission in November. Anglers could keep two 13 to 15-inch walleyes as part of their daily bag, under the proposal. The current rule is five 15-inch walleyes.

“This is going to allow anglers to keep a couple. It satisfies those who want to fry up the skinny ones,” says Phil Schneeberger, the Michigan Department of Natural Resources Lake Superior Basin Coordinator. “They can fish and come in without being empty-handed.”

The change was requested by anglers and resort owners, according to Schneeberger. The say Lake Gogebic doesn’t produce many 15-inch keepers. The 13,300-acre lake in Gogebic and Ontonagon counties is popular for perch, walleye, northern pike, and smallmouth bass.

Lake Gogebic was stocked by the DNR in 1979 with 600,000 walleye fry. Private parties have since stocked several hundred thousand fathead minnows, according DNR records. Allowing anglers to keep a couple smaller fish daily will reduce “the biomass,” Schneeberger said, in turn leaving more food for those that remain. The proposed change is not expected to have any detrimental effects.

“That’s been a problem since the early 1900’s when walleyes were first put in there,” Schneeberger said. “There isn’t a lot of food produced for them to eat and grow on…“People were catching a lot of walleye and were not able to keep them. That frustrated anglers and resort owners who were trying to promote the fishery as part of their business.”

The NRC is expected to act on the proposed rule change in November. The Lake Gogebic change is one of 11 proposed for warm water species on select waters. Each is designed to allow anglers to take more fish home and reduce the number in the lake.

“The goal is to thin them out,” says Tim Cwalinski, senior fisheries biologist for DNR’s Northern Lake Huron Management Unit. “We want to liberalize harvest where with pike, for example, the 24 inch size minimum size limit and two-fish bag is not appropriate.”

After more than 30 years in the outdoor writing business, you would think I'd know better.
View all posts by Howard Meyerson →
This entry was posted in Uncategorized and tagged Conservation, Fishing, Lake Gogebic, Michigan Department of Natural Resources, Northern Pike, Walleye. Bookmark the permalink.