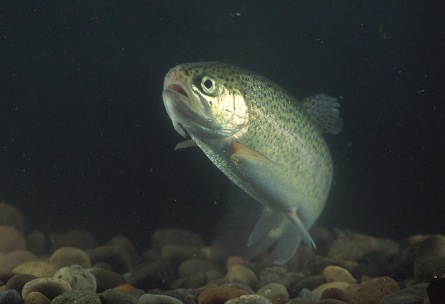 Hatchery steelhead raised in open water pens did not do as well as those released directly to the lake. Photo: USDA.

Grand Rapids, Mich. – A 3-year experiment to determine if steelhead survival improves when hatchery-born yearlings are allowed to acclimate in a pen before being released to open water showed no benefit, according to state officials who add the approach may even be detrimental.

“We were a little surprised (by the findings),” notes Jan VanAmberg, manager of Marquette and Thompson state fish hatcheries, referring to 2011- 2013 experiment at three Lake Huron Ports – Harrisville, Harbor Beach, and Van Etten Creek on the AuSable River. “We hoped to see the same dramatic (positive) response we see in chinook salmon. But, the bottom line of this study was net pens do not make a difference with steelhead.”

Net pens have long been used to boost chinook salmon survival and returns to Lake Michigan ports where they are stocked. The young hatchery plants are held in pens at lower-river locations where they are fed for a couple of weeks before being released. The approach lets them imprint on the river and grow larger and more hearty before running the gauntlet of predators they may encounter heading out to the open lake.

VanAmberg said steelhead planted directly into waters survived better than penned fish at Van Etten, and much better at Harrisville, with mixed results Harbor Beach, which has better water quality.

All steelhead were fin-clipped so they could be identified later. A total of 205,653 were stocked during the study. Creel surveys determined that penned and direct-planted steelheads were caught by anglers in the open water fishery. Harbor Beach fish returned best to the open water fishery while Van Etten returned best to the shore fishery. Harrisville returns were low, VanAmberg said. 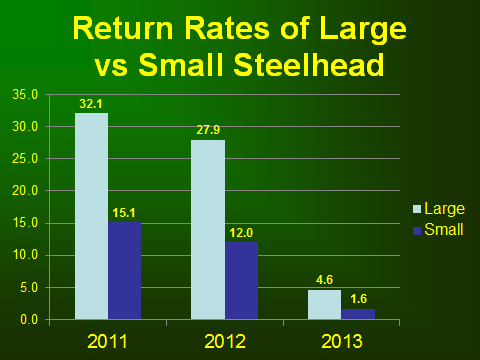 “The larger fish returned twice as well as the smaller fish,” VanAmberg said. “There are so many predators in the outer parts of Saginaw Bay and Lake Huron, the fish needed to get off shore and get away from the predators. The larger fish had a better chance of evading them.”

Why net pens boost salmon survival but do not for steelhead is still a matter of speculation. Some, VanAmberg says, has to do with the nature of each species and their size when planted.

“We may never tease out all the reasons, but the biggest difference is they are different animals. The steelheads were 8.5 inches where the chinooks are 3.5 inches long,” VanAmberg said. “The steelheads are almost 10 times bigger by weight and heartier. They handle the stress of handling and transport much better.”

1 Response to DNR: No benefits from steelhead net pen experiment