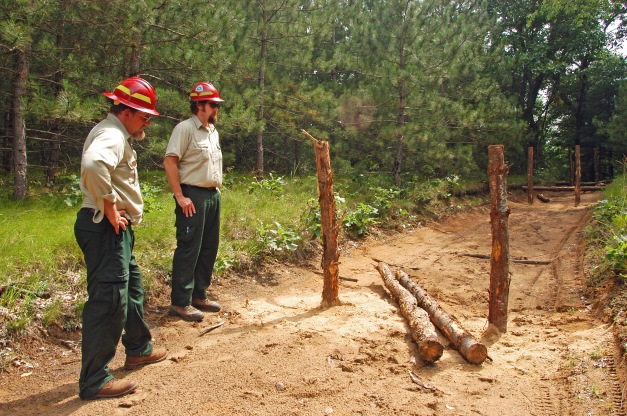 Maybe you’ve heard the scuttlebutt about the U.S. Forest Service closing more roads in Huron-Manistee National Forest. The message, which got posted on social media by off-road vehicle enthusiasts, urgently suggests that those who care should write the forest and oppose any road closures.

Ken Arbogast, the national forest’s public affairs officer, says that has happened, but the first part isn’t quite true. No roads are being proposed for closure. At least not right now. Forest staffers are inventorying roads and assessing the need for each. What’s needed, according Arbogast, is feedback from users about the roads and two-tracks they would like to see kept open. The February 15 comment deadline has been extended until March 15 to allow for that.

“There’s been a lot of misinterpretation showing up on blogs,” Arbogast said. “We know we may eventually have to close some roads, but this isn’t a decision (to do so). We’re doing an analysis of all the roads, from two tracks that are already closed up to paved roads. Our fire staff is looking at roads to see if they are necessary for fighting fires. Are there some that are a vector for introducing invasive species? We also are looking to see what roads we don’t want on the system.

“We’ll gather information and get answers from our specialists, the archeologist, biologist, recreation manager, and then make decisions. We need to know what roads we can afford to maintain – a minimum transportation system. That’s what this study is.”

The current road analysis stems from a 2005 federal rule that requires national forests to develop sustainable road systems that benefit people, but don’t do environmental harm. Each forest is required to develop a final motor vehicle use map. Congress has also

Barricades like these are used to close off unwanted user-created two tracks in the national forest. Photo: Howard Meyerson

indicated that less money should be spent to maintain the roads.

Two-tracks created by users, – whether for off-road fun or hunting access – may or may not become part of the final transportation system. That’s where feedback is important, Arbogast said.

The 979,000 acre national forest currently has 680 miles of two-track, called Level 1 roads. Those are the roughest and they include roads made by users. It has 1,824 miles of Level 2 roads, which are slightly better. Level 3 roads, passable in a passenger car – but bumpy, total 480 miles. There are 53 miles of Level 4 roads, more comfortable still, and 23-miles of paved, Level 5 roads.

“We’ve had many pop up over the years; we close them as we come to them,” he said. “Some are frequently reopened (by users), or new ones appear. People try to cut down berms we put in and it’s been an ongoing battle.”

The crucial question is what’s affordable. Congress appropriates less money than is needed to maintain roads, Arbogast said. And living within means will eventually require scaling down the road system.

“The message from Congress is reduce the amount being spent on road maintenance,” Arbogast said. “We have 3,047 miles of road on the forest. To maintain them to standard we need $1.4 million a year. We get less than half of what’s required.’

Arbogast wants to hear from users – all kinds of users – and not just with form letters. Hunters have expressed concerns about diminished access if two tracks go away. But most of the form letters he’s received say ‘leave everything open.’

That, he says, is not likely to happen.

Arbogast explained that 96 percent of the Manistee forest is within a half mile of a motorized trail or system road. Only 4 percent of the forest has places where people can get away from roads.

“A lot of people say we need ‘maximum access,’ but I would also like to hear from those who would like to be able to walk a mile (without hitting a road),” Arbogast said.

To make your concerns known, send your comments to Ken Arbogast at karbogast@fs.fed.us

After more than 30 years in the outdoor writing business, you would think I'd know better.
View all posts by Howard Meyerson →
This entry was posted in Uncategorized and tagged Conservation, Environment, Forests, Huron-Manistee National Forest, National Forests, Nature. Bookmark the permalink.