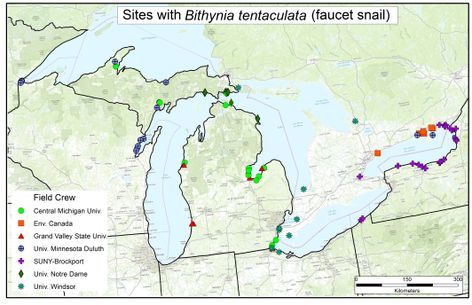 GRAND RAPIDS, MI – Scientists studying the health of Great Lakes coastal wetlands report that faucet snails have been found in many more waters than anticipated. The invasive snail, native to Europe, poses a threat to native snails and to waterfowl.

“These snails are extremely competitive with native snails,” said Neil Schock, a wetland technician with the Institute for Great Lakes Research at Central Michigan University. “They outcompete and out-produce and they are hosts to three different intestinal flukes (parasites) that cause mortality in waterfowl.

“Here in Michigan we haven’t seen that (dead ducks) as much, but Minnesota has had die-offs and they have been seen in (other parts of) the Midwest. One I know of killed 4,000 to 9,000 waterfowl, a good portion of those were scaup.”

The parasites, called trematodes, caused massive waterfowl die-offs in Minnesota and Wisconsin waters that are part of the Upper Mississippi River National Wildlife Refuge. The U.S. Geological Survey reports that 22,000 to 26,000 birds have died from them on northern waters in the refuge dating back to 2006. The four-state refuge lies within the Mississippi Flyway where nearly 40 percent of the continent’s waterfowl migrate.

“The magnitude of the impact is yet to be seen, but I expect to see some impact,” said Donald Uzarski, director of the CMU Institute for Great Lakes Research.  “I anticipate we will see further and rapid spread of the snail.

Uzarski heads up the $10 million, five-year wetland health assessment that was funded in

2010 by the U.S. Environmental Protection Agency through the Great Lakes Restoration Initiative. CMU is one of 10 universities and three government agencies conducting the work in U.S. and Canadian waters.

“We have monitored over 1,000 Great Lakes wetlands,” Uzarski said. “It shows that when we do large-scale monitoring, we learn more than we expect to learn. We’ve now expanded the information known about this invasive species.”

The faucet snail, which can grow to a half-inch in size, was introduced to Great Lakes waters in the 1800’s. It was first found in Lake Michigan in 1871, according to Schock.

The snail is thought to have arrived attached hard ballast used in ocean-going ships arriving from Europe. The mud, rocks and boulders used as ballast were offloaded when the ship took on a load of Michigan timber.

What the wetland scientists expected to find were more “localized” populations of the snails, based on earlier distribution maps developed by the U.S. Geological Survey, but instead they found the snail widely distributed in Michigan and other Great Lakes waters.

“The alarming part, the red-flag, is we have added a large number of new spots where they are found,” Schock said. “We were updating the U.S.G.S, map of their distribution as part of this study, which showed them (only) in Saginaw Bay and Muskegon Lake (in Michigan).

Just when the snails spread across Michigan waters is not known. Their wide-spread distribution was only documented in the last three to five years, according to Uzarski.  But the snails are known to hitchhike from place to place on ducks and other waterfowl. They are also moved from by boaters and anglers.

“That’s why it’s important to practice “Stop Invasive Techniques,” Schock said. “That means washing the boat and monitoring anchors and anchor lines, making sure they are clean and that livewells are clean and empty.S

“Even if you can’t see them, the (snail) larvae can be there”

After more than 30 years in the outdoor writing business, you would think I'd know better.
View all posts by Howard Meyerson →
This entry was posted in Uncategorized and tagged Conservation, Environment, Faucet Snails, GLRI, Invasive Species, Nature, Snails, U.S. EPA, U.S. Geological Survey. Bookmark the permalink.