Posted on October 5, 2014 by Howard Meyerson 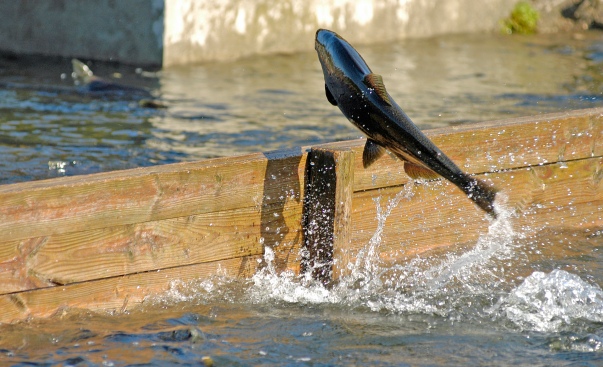 BEULAH, MI — Fall is the time of year when Lake Michigan salmon start nosing their way up natal streams to spawn and die. State fish managers, however, are uncertain about what to expect this season. Many of the salmon runs on the lake shoreline are slower than average.

“I wish we had more fish,” said Aaron Switzer, the Platte River State Fish Hatchery biologist. “The past two years have been really good for coho (on the Platte River). We had 30,000 come in. At this time last year, we passed over 20,000. So far this year, we’ve passed 9,500 cohos. The run isn’t turning out as well as I’d hoped.”

Switzer is in charge of raising 1.57 million coho salmon at the Platte River hatchery, which produces the young fish that are stocked every April in rivers such as the Platte, Boardman, Grand, Rogue, St. Joseph and Manistee, among others. Switzer relies on returning cohos to provide eggs for the stocking program.

“At this point, we have no worries about completing the egg-take for Michigan,” Switzer said. “We usually collect about 5 million coho eggs. Michigan gets 3 million and Illinois and Indiana get a million each. We can do that with about 5,000 fish.”

Just why Platte River cohos are missing this year is unknown. Switzer speculated that unseasonably warm conditions in September kept many out in Lake Michigan, where open-water anglers continue to catch them. But, biologists also said this year’s expected salmon, the mature fish born in 2011, didn’t get a very good start on life because of low alewife numbers in Lake Michigan.

“The chinook salmon runs on southwest Michigan rivers have been below average,” said Jay Wesley, supervisor for the Michigan Department of Natural Resources’ southern Lake Michigan management unit. “So far, we are not seeing a lot of adult chinooks.” 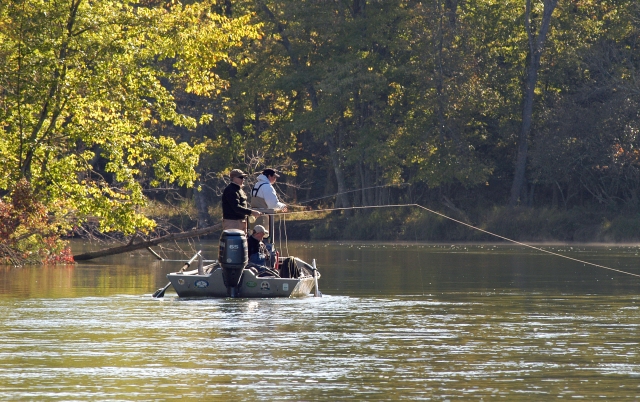 Anglers have asked where the king salmon are this year? Photo: Howard Meyerson

Change for the better?

Cohos, on the other hand, are running well on the St. Joseph, Kalamazoo and Grand rivers.

The DNR changed its Grand River coho stocking strategy in 2013 to improve survival. Hatchery cohos now are stocked at locations downstream of Lyons, rather than upstream in Lansing, shortening the trip to Lake Michigan and reducing the number of dams and predators they encounter.

Wesley said the change might have improved survival and provided strays for the Kalamazoo River. The St. Joseph, he said, could be OK because of stocking there by both Michigan and Indiana.

Scott Heintzelman, the fisheries technician supervisor who oversees the Little Manistee River Weir, where chinook eggs are collected, said the run there appears to be three weeks behind.

“Based on the fishing and what we’ve seen on streams, I don’t think it will be a strong year (for runs),” Heintzelman said. “I have heard fishing reports and talked with anglers. On the Big Manistee River, everyone is saying, ‘Where are the fish?’ There aren’t nearly the mature chinooks that you would expect to see this time of year.”

To get his quota of 4.3 million chinook salmon eggs, Heintzelman needs 3,000 adult chinooks and a 50/50 split of male and female. Michigan will get 3.1 million or 3.2 million of those eggs. Illinois will get 800,000 eggs and Indiana will receive 400,000 eggs. Achieving that shouldn’t be a problem, he said, because fewer are needed than in the past.

Lake Michigan now is stocked with 50 percent fewer hatchery salmon because of a change in 2013, when surrounding states agreed to try to conserve alewife populations.
Michigan now plants only 559,000 chinooks, rather than the 1.6 million annually in the past.

“That takes the pressure off,” Heintzelman said. “We’d like to see better numbers (in the run), but we are at a place that we can do it with a not so great run of fish.”

For river anglers, that might not be much consolation. But, the good news is lake anglers have reported catching robust and healthy 2-year-old chinooks. Were they not in the mix, there would be much more to worry about.

Those fish will run the rivers next year.

This story appears on MLive Outdooors