Posted on September 14, 2014 by Howard Meyerson 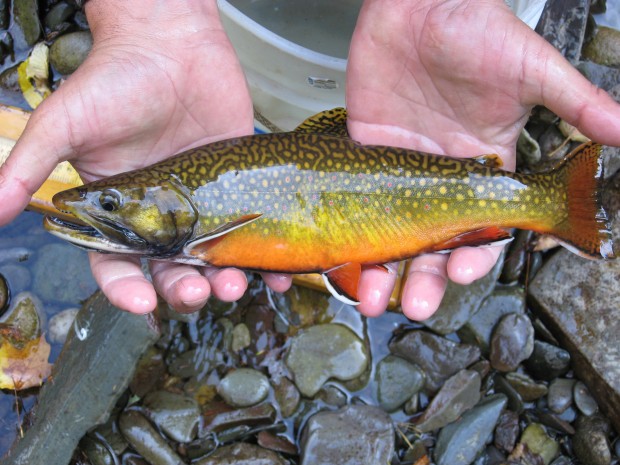 It will take a while, but in a decade or so, anglers once again may be able to fish for coaster brook trout along Michigan’s Lake Superior shoreline and tributaries.
State fisheries managers are embarking on a long-term experiment to see if the big lake-run brookies can be restored.

“Coasters are part of our natural heritage. They are a native species and a beautiful fish,” said Troy Zorn, a fisheries research biologist at the Michigan Department of Natural Resources Marquette Fisheries Research Station. He is the author of a proposal that will go before the Natural Resources Commission in October.

“This is an opportunity to try to restore a unique trophy fishery to anglers in the state,” Zorn said. “We’re proposing restrictive regulations for eight (Upper Peninsula) streams. It will affect about 35 miles of river; about 23 of those miles have brook trout.”

What’s proposed is to lower the daily limit to one trout per day and increase keeper size to 20 inches on the experimental rivers. Anglers currently can catch five per day with an 8-inch minimum size. The regulations would go into place on the lower reaches of the Pilgrim, Silver, Slate, Ravine, Big Huron, Big Garlic and Iron rivers, along with the entire Little Huron River. The rivers are found in Houghton, Baraga and Marquette counties.

Coasters are legendary in Michigan — big, beautiful trophy brook trout that grow to 20 to 25 inches long and readily take a fly or lure.

Once abundant in Lake Superior streams and near-shore waters, most are thought to have disappeared by the late 1800s due to overfishing. Logging and habitat loss finished off most of what remained by the 1930s, according to a Great Lakes Fishery Commission’s plan for rehabilitating Lake Superior brook trout.

Today, they are found only in two Michigan waters: the Salmon Trout River in Marquette County, where angler access is limited by the Huron Mountain Club’s extensive private land holdings, and in the waters off Isle Royale National Park. Minnesota and Ontario, however, have had success restoring their populations. They did so by implementing similar restrictions.

“Minnesota put those regulations in place in 1997,” Zorn said. “After five years, they didn’t see much, but after 10 years, they started to see larger brook trout.
“They had coasters by 2007. By 2013, they had legal 20-inch fish they never saw before — and it was exciting.”

The jury is still out among scientists about whether coasters are genetically different from stream brook trout. For a long time, it was thought so, but genetic studies of the Minnesota fish showed they were “native brook trout, not coaster strains,” according to Zorn.

In a nutshell, when left alone by anglers and allowed to grow larger, some of those native Minnesota fish migrated out to the lake, grew larger and eventually returned to spawn.

This 13-inch coaster was found on one of study streams. Photo: Troy Zorn

Bryan Burroughs, executive director for Michigan Trout Unlimited, is enthusiastic about the experiment. The organization, he said, has been pushing the idea of restoring coaster brook trout for several years.

“I don’t know just what to expect,” Burroughs said. “They are beautiful brook trout — awe inspiring. Trophy brook trout is something that men go nuts about. If we can get them back in even a few places where people can fish them here, rather than having to go to Labrador or the Arctic Circle, it’s a pretty attractive outcome.”

Henry Quinlan, a U.S. Fish and Wildlife Service fisheries biologist in Ashland, Wisconsin, also is optimistic. His agency has been working to restore coasters in the region. He called Michigan’s plan a good first step.

“I am optimistic that we will see larger fish, but I don’t know that 10 years will be sufficient to see a change in abundance,” Quinlan said. “We’re excited that Michigan is proposing protective regulations for brook trout. The proposal is a good start.”

The proposed restrictions have the support of many Upper Peninsula anglers and clubs, Zorn said. That will be important, because some of the waters don’t see a lot of fishing — or law enforcement. The experiment’s success, in part, will rely on anglers complying with the rules.

“We’ll have those regulations in place for 10 years and see how it works,” Zorn said.
A positive outcome would be more than special. In addition to offering a fun and exciting fishing experience, it would mean that the angling community pulled together to help restore a beautiful and unique slice of Michigan’s natural history.

That’s an outcome worth waiting to see.

This story appears on MLive Outdoors.