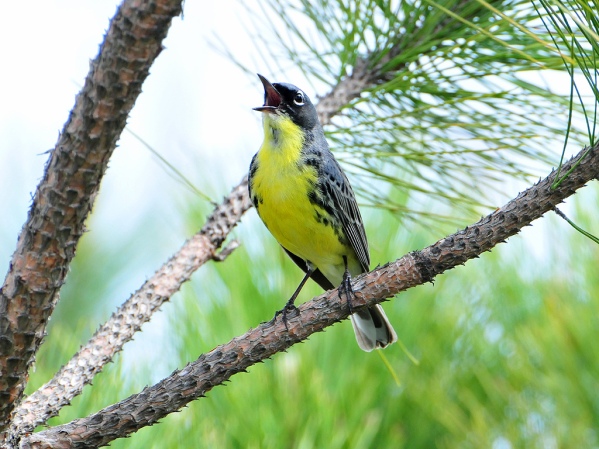 Michigan’s endangered Kirtland’s Warbler appears to be well down the road to recovery. More than 2,000 singing males were reported in Michigan’s 2013 Kirtland’s Warbler census. That was the second consecutive year that the population was double the federal recovery goal of 1,000 singing males (breeding pairs)—a world away from 1967 when the bird was added to the federal Endangered Species List, or when its populations reached record lows in 1974 and 1987 and only 167 were found.

While the warbler’s rebound is reason for celebration, federal and state wildlife officials and Michigan’s conservation community remain concerned about its future. Successful recovery brings talk of removing it from the Endangered Species list, a decision that places the gray-blue and yellow warbler at a crossroad with respect to its future survival.

“This is a conservation-reliant species that continues to depend on our future action,” says Dan Kennedy the endangered-species coordinator for the Michigan Department of Natural Resources (DNR). “That’s why having a plan is so important.”

Kennedy is one of several who are working on a Kirtland’s Warbler Conservation Plan. He is coordinating that cooperative effort between his agency, the U.S. Fish and Wildlife Service (USFWS), and Huron-Manistee National Forest. The plan is to be released for public review this summer. It will guide future management and replace the federal recovery plan once the bird is delisted.

Delisting, however, is not an automatic step, according to federal officials. Known threats have to be addressed before that will be proposed. “We have two issues ahead,” notes Scott Hicks, the USFWS field supervisor in the East Lansing field office. “One is to assure an adequate supply of appropriate-aged habitat, and making sure there are commitments to manage for that. The second is cowbird control.”

The USFWS pays for cowbird control, an annual effort to trap thousands of the parasitic birds that threaten the warblers by laying eggs in their nests. Studies show the presence of cowbird chicks, which are larger, more aggressive, and outcompete for food, results in poorer warbler survival. The cost for trapping is approximately $100,000 a year. “It is paid for by endangered species recovery funding,” Hicks said. “If we delist the Kirtland’s Warbler, that funding will be redirected to other species. We will need another way to cover the costs.”

Cowbird control isn’t the only expense. Habitat management takes place on approximately 150,000 acres of state and federal land. Habitat and threat management is estimated to cost $1.7 million each year in northern Michigan breeding zones. Those costs are borne mostly by the DNR and the Huron-Manistee national forest. 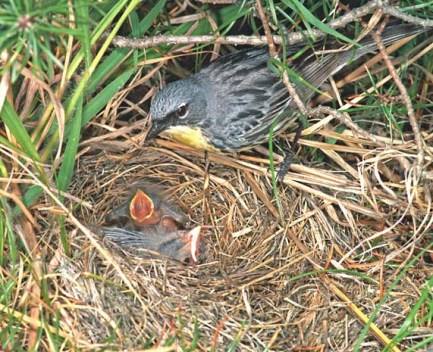 A male Kirtland’s Warbler at the nest. Photo: U.S. Fish and Wildlife Service

State and federal officials are beginning to consider new management approaches which might reduce the expense and increase plant and animal diversity. The current approach involves planting dense stands of jack pine and scheduling cut rotations. The new approaches would include, among other things, a greater use of prescribed burning rather than tree planting and cutting, the inclusion of red pine in jack pine stands (which will generate additional revenues to pay for the program), and exploring alternatives to conducting a full-scale Kirtland’s warbler census each year.

“This is the first year the DNR does not have the funding to do the census on state lands,” Kennedy said, adding that the cost of the census now approaches $75,000 annually. It has grown as the Kirtland’s Warbler population has grown. “We will follow up with a very detailed report in 2015,” Kennedy said. “We aren’t saying we won’t do a census, but we are evaluating whether there are other ways we can. It may be every other year.” Huron-Manistee National Forest officials say they will continue to conduct the census on federal lands. Volunteers are used rather than paid staff, and the cost is lower.

Government funding for Kirtland’s Warbler management is not currently in jeopardy, but state and federal officials raise questions about its certainty in the long run. Kennedy assures that the DNR will continue to provide right-age habitat in the foreseeable future. The same is true for Huron-Manistee National Forest.

“My concern is that once the species is delisted, no one is required to provide habitat,” offered Phil Huber, the forest biologist for the Huron-Manistee National Forest. “We signed a memorandum of understanding that said we will continue to provide habitat indefinitely, but those MOUs are for five years. They have to be renewed. It’s not a huge concern, but it weighs on my mind. Everyone will become less familiar with the need over time. I’ve seen that attitude already.”

OUTSIDE FUNDING WILL BE NEEDED TO GET THE JOB DONE 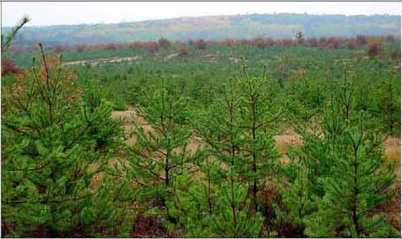 Foundation to pay for the development of the Kirtland’s Warbler Alliance, a broad-based support network being created to help with fundraising and public outreach. Ertel’s organization also received a $171,000 Great Lakes Restoration Initiative grant. “We’re looking to raise $4 million over the next three years, with the understanding that the endowment would have to grow,” Ertel said. “The Alliance would be the manager. Having the fund would allow management to continue: maybe some cowbird trapping or habitat work along with education and outreach.”

The Alliance has 13 members with varied backgrounds. Much of its first year was spent getting organized and focused on its goals. As of February 2014, Huron Pines had raised $4,300 using a crowd sourcing tool called CrowdRise. The results were less than Ertel had hoped for, but she was pleased to see some initial support and said Huron Pines has other fund-raising efforts planned in the future.

“We are now at a point where we can go to folks and say we have something,” Ertel said. “We are in the very beginning stages of raising money. We set a $10,000 goal to start and raised $4,300. There is still work to be done, but the take home (message) for us is there is support there. A lot of it came from in the family, but a good percentage wasn’t from them.”

Grosse Pointe Audubon president Bill Rapai, a Kirtland’s Warbler Alliance member, said he is confident that state and federal officials will do the right things and he supports investigating alternative management techniques. “We have the luxury of having a healthy population, and a really good group of scientists have put together a conservation plan,” Rapai said. “This isn’t a crisis, but it is a time for action. We can take a step back and give some good thought to what needs to be done for Kirtland’s Warblers.”