FARWELL, MI — The lure of big brook trout always hooks me. It’s rare I turn down an opportunity to fish them. So, when Jeff Johnson called and invited me to fish at Brookhaven Lake, his private two-acre pond stocked with Canadian Lake Nipigon brook trout, I gladly said ‘yes.’

Brook trout are delightful fish, colorful and often aggressive. I’ve caught them on crawlers, spinners and flies; diminutive and colorful but picky beaver pond brookies, and those that hit like lightning on Upper Peninsula streams.

I looked forward to the day ahead and hoped to redeem myself after getting skunked two years ago. That’s when I first visited Johnson’s property to learn about his project.

Johnson and his son, Michael, acquired Brookhaven Lake in 2010 as means of honoring Johnson’s deceased father, George Johnson, who had left them an inheritance and had long lamented the disappearance of the grayling in Michigan. The once prized stream fish, with its sail-like dorsal fin, disappeared following the ravages of the early 20th century lumber boom, which destroyed much of its habitat. Overfishing also contributed to its demise along with competition from later-introduced European brown trout. 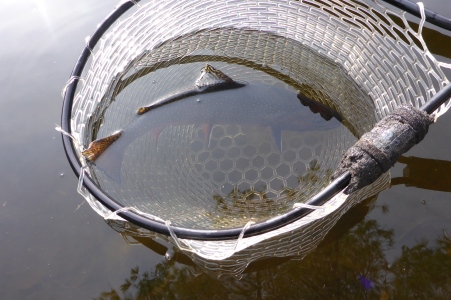 One of the smaller brookies caught this day. Photo: Howard Meyerson

The Johnsons honor his memory by stocking the pond with grayling each year. They also stocked it with 1,500 brook trout that have since grown and reproduced.

Youth groups, like Boy Scouts and school clubs, can arrange to fish for free and walk the self-guided nature trail on the property where they learn about Michigan’s trout fishing history and conservation.

“Be sure to let it sink. Count to 10, then strip strip strip,” Johnson instructed once we were out fishing from his driftboat. I began with a weighted, leech imitation. Our plan was to fish deep. The bottom was down 20 feet. But the lake surface was occasionally broken by the rise-forms of big, feeding brook trout.

Leeches, it turned out, wasn’t on the menu.

“Try this,” Johnson offered, 30 minutes later. “Trust me. This is the ticket.”

I looked with disbelief at the tiny, size 22 nymph he handed me. “And let’s add some fluorocarbon tippet, some one pound test,” he added. “When in doubt, go smaller.”

No wiser words have been uttered. A chunky, 14-inch brookie hit the tiny fly on my second cast and bent the rod, its full-coloration obvious below the surface. I played it for a few minutes and Johnson got the net.

“Not a bad fish for the first of the season,” Johnson said smiling. 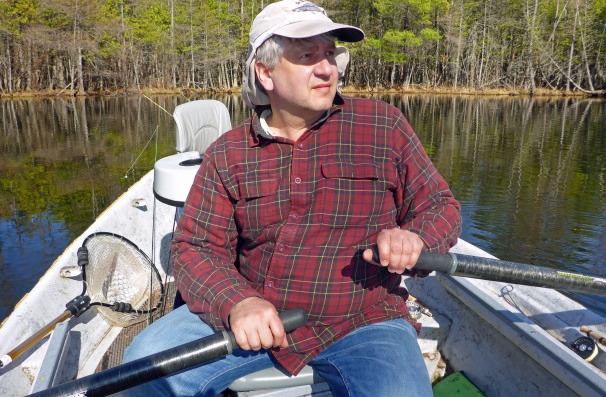 It was the first of four beautiful brook trout we would land over the next couple of hours, fat and healthy, marvelously colored – perfect on a mild, sunny day just before the season

trout opener. Johnson landed two in the 15- and 16-inch range. One, much larger, broke off after a scuffle. That’s the nature of one pound test line.

“These small nymphs consistently catch fish,” Johnson affirmed after the second brookie hit the net. “If you are not catching any, go smaller.”

Johnson has introduced more than 500 youth to trout fishing at Brookhaven Lake. He will be adding a tepee to the grounds this year. His project is funded partially out-of- pocket. The rest, he attempts to recoup by charging anglers to fish there and have him guide. Fishing is flies-only and allowed only five or six days a month. All of the fish must be released.

“The biggest brook trout caught so far is 24 inches,” Johnson noted. “And the biggest grayling was 14 inches. The issue we’ve faced is the fish become educated. What started with 30- and 40-fish days became 30-fish days and then 15- to 20-fish days. But it is a good place for someone to bring their grandkid or their wife. On rivers you have worry about your back cast. Here, you don’t.”

Casting to a boil of fish on the surface, Johnson hooked and landed the first of two

This young grayling rose to a fly. Photo: Howard Meyerson

grayling– 6-inch fish stocked last October. They survived the winter. He was ecstatic.

Twenty minutes later I had another fish on – again a brookie, but much larger this time. “Look at its back. That’s a big fish,” Johnson chortled as I fought it. In the net, we realize it is nearly 18 inches.

And, I was too. The sun was getting low.