Posted on December 8, 2013 by Howard Meyerson

Midwest Karner Blue Butterfly populations have crashed and the effects of climate change are suspected to be the cause. Photo: U.S. Fish & Wildlife Service

We hear a lot about the effects of climate change these days. Polar ice caps are melting. Polar bears are threatened as a result. The Minnesota Star Tribune recently published an extensive report on how it will affect Minnesota’s forests called: “Saving the Great North Woods.” And then there is the new report by the National Wildlife Federation called “Nowhere to Run: Big Game Wildlife in a Warming World,” which can be found online at: nwf.org/sportsmen.

NWF said that historic restoration efforts for many game species like mule deer, moose, caribou and others are “expected to be set back by climate change.” It discusses how this will be a loss for sportsmen who have invested millions of dollars over the years in the restoration of many big game populations.

The report tells how moose can become heat-stressed by warming weather and how warmer temperatures can bolster tick and midge numbers and extend their range. Both insects are disease carriers. Deer ticks carry Lyme disease which affects humans while midges carry epizootic hemorrhagic disease that can be devastating to whitetail deer.

Here in Michigan, the effects of climate change are also being noted. An April 2013 special report by the Michigan Department of Natural Resources called “Changing Climate, Changing Wildlife: A Vulnerability Assessment of 400 Species of Greatest Conservation Need,” looked at birds, plants, mammals, reptiles, insects and amphibians. It found 61 percent of non-game species were vulnerable to climate change as were 17 percent of game species.

“It’s on our radar,” said Chris Hoving, co-author of the report and the Michigan DNR adaptation specialist. “What we found was that one fifth of the game species had some vulnerability to climate. As expected, moose was one. But one you might not expect was ruffed grouse.”

IF ASPEN GOES SO DO RUFFED GROUSE

Grouse, he said, would be affected by the loss of aspen, which is predicted decline as temperatures rise. Scientists predict a three to five degree average increase in temperatures here by 2050. Grouse are expected to survive, being able to move further north. In Michigan they are at southern end of their range. But if they do move north that would mean fewer here.

Other effects are showing up already. Various breeding bird populations are moving further north. That evidence was documented in the Michigan Breeding Bird Atlas, Second Edition published online by the Kalamazoo Nature Center in 201. It can be found at: mibirdatlas.org/ 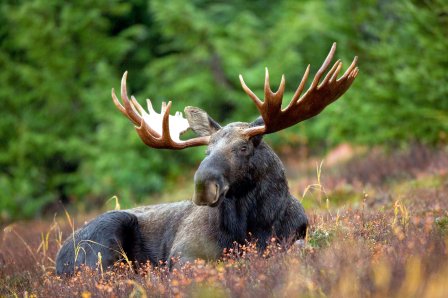 Moose are among the big game species that are expected to vulnerable to the effects of climate change. Photo: U.S. Fish & Wildlife Service.

“The population is more fragile than we thought,” said Hoving, who is part of the multi-state Karner blue butterfly recovery team. “It was surprising to see. We expected that due to last year’s drought that numbers would be low, but based on the winter we thought they would be about the same. Seeing it drop by 90 percent in southern Michigan was quite a shock.”

The northern butterfly population around Baldwin dropped only by 30 percent, but Wisconsin lost 60 percent and Ohio lost 80 percent. Indiana lost 100 percent and Minnesota lost theirs two years ago.

“The Minnesota population just blinked out,” Hoving said. “They are still looking but haven’t seen any since. We are hoping it doesn’t get any hotter.”

Just what killed them is still a matter of theory, but climate-related changes are the suspected culprit. Other factors like disease, human counting error, and mowing the habitat rather than burning have been ruled out.

Having less snow and more frequent thaws is a factor being considered. Karner blue butterfly eggs historically have been protected by thick insulating layers of snow. They are vulnerable to drying out if they are exposed.

“We know from past studies that the number of butterflies we see in spring is related to the amount of snow seen the previous winter,” Hoving said.

Drought and high heat are other factors. Blue lupine flowers go dormant in drought conditions. Karner blue butterflies eat only blue lupine. They need it to survive. The lupine went dormant last summer. The first flight was OK, but the second one collapsed.

“There may not have been anything for them to eat,” Hoving said. “Something happened between the first and second flight.”

A third theory is that the butterflies died from heat stress in the pupa stage where they transform from a caterpillar to butterfly. Inside their chrysalis they are sensitive to high temperatures or low humidity and drying out, Hoving said.

“We started looking at the temperatures this past summer. It was not terribly hot or terribly dry; it was pretty close to average, but there was one spell where we had four to five days in the mid-90s. We looked at the timing of the pupa stage and saw the warm spell coincides. The theory now is that a lot died in the stage from heat stress.”

What happens now, of course, is a big question. Hoving said researchers are looking at what might be done to restore populations. That includes maintaining the captive Karner blue butterfly populations at the Detroit and Toledo zoos for future release, moving them north to snow-belt zones in the state, and looking for seeing how best to retain blue lupine.

It sounds simple, but it does makes one wonder just what else is ahead?