Michigan mountain biker takes on the toughest race in the world 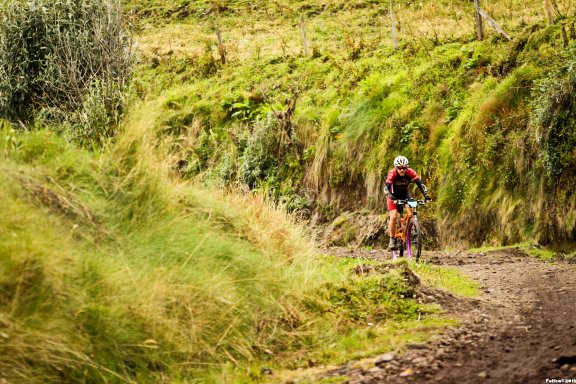 Dennis Murphy takes on one of the long climbs in Costa Rica’s La Ruta. Photo: Courtesy of Dennis Murphy

Dennis Murphy hit a tree while riding his mountain bike back in August of 2000. He was racing at Big M in the Manistee National Forest. Murphy wasn’t watching closely and crushed a vertebrae in his back. The collision broke his bicycle and put him in a back brace for two months.

What it didn’t do was put him out of commission.

Sobering as the event was, Murphy read a magazine article during his recuperation that set his imagination ablaze. It generated a tiny spark that would smolder for 13 years until he was ready to fan its flames.

Murphy, then 40, read about a mountain bike race in Costa Rica called “La Ruta de Los Conquistadores,” the route of the conquistadors. It is billed as the “Toughest Race in the World.”

Murphy flew to Costa Rica in October and competed in the three-day race that retraces a route taken by Spanish Conquistadors in the 1560’s when they began what would become a 20-year journey through mountains of Costa Rica.

La Ruta is 193 miles long. It meanders from the Pacific Ocean to the Caribbean Sea, traversing mountainous, often muddy, jungle terrain. It winds by the domes of ancient volcanoes and along treacherous rivers.

“The exoticness of the race and the adventurousness of crossing bridges and looking down into a gorge and seeing crocodiles has been a part of my imagination ever since that accident,” said Murphy, now 53, a Grandville resident and quality engineer at Johnson Controls.

JUST TO FINISH IS A CHALLENGE

Just to finish at all, of course, is a feat in itself. Each segment has a time limit. Those who don’t get to the checkpoints in time are DNF (did not finish) for the day. 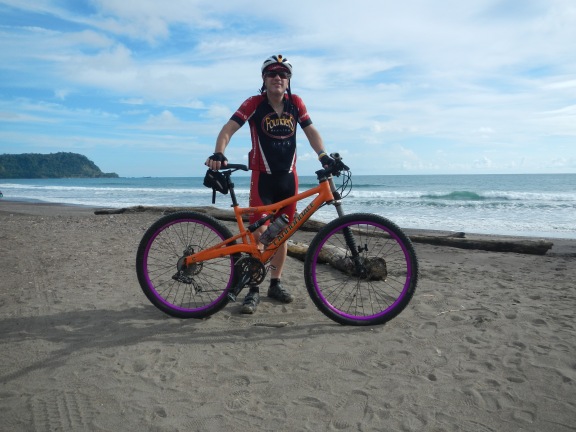 Dennis Murphy stops by the Pacific Ocean before starting the grueling 3-day race to the Caribbean Ocean through the mountains of Costa Rica. Photo courtesy of Dennis Murphy.

tackle it,” said Murphy who grew up in Muskegon and competed with riders from all over the globe.

Murphy began riding mountain bikes in 1998 and worked over the years to become an expert rider. That means someone who can handle tough terrain and long-distance rides. The crash in 2000 didn’t hold him back. He was back on his bike and racing again the very next spring.

But shorter races proved not to be enough. Murphy wanted to push harder and further.

In 2007 he started competing in 12-hour and 24-hour races. Those endurance rides gave him the confidence to go the next step: entering 100-mile backcountry races.

A Century (100-miles) as they are called in riding parlance, are tough endurance rides even for road cyclists. Pushing a 100 on a mountain bike in tough terrain is a category all its own.

Murphy competed in five 100-mile races in 2011. All were part of the National Ultra Endurance Series. They included the likes Shenandoah Mountain 100 Backcountry Mountain Bike Race in Virginia, and the Wilderness 101 mile Backcountry Mountain Bike Race in Pennsylvania. At the end of the season his best four finishes put him in 10th place out of 11 in the over-50 year old category.

For many that would have been enough. But, not for Murphy; he had something else in mind.

“Those two were grueling for me,” Murphy said laughing. “I eased back in 2012 and finally decided I might be able to tackle La Ruta. I am not that fast, but I can ride for a long time and last. I might be behind someone at 24 miles and then pass them at 96 miles.”

La Ruta, Day 1 would challenge his ability. Murphy spent more than 10 hours on the 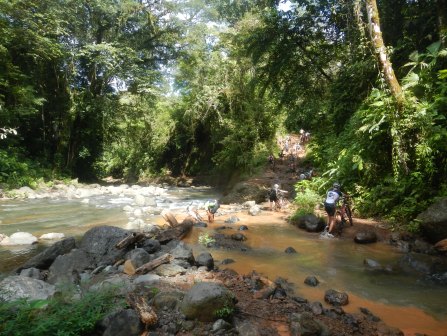 Treacherous rivers and mud are all part of La Ruta. Photo courtesy of Dennis Murphy.

bike, pumping furiously uphill in steep terrain, climbing 12,000 feet before slogging through mud and rivers where boa constrictors were seen. The route was 69 miles long.

“We were climbing through the jungle and I kept pumping. At one point my thighs were cramping and I thought to get off and walk a bit, but it cramped worse. I got back on the bike and didn’t get off until I had to,” Murphy said.

Day 2 would take him through volcano country, climbing 8,000 feet and traveling 50 miles. Murphy came in 144th out of the 187 racers that day. The route would be cooler. It would only be in the 80s’s, he said, but the UV exposure was high and so he got sunburn.

Day 3 would take riders back down to sea level but not before climbing another 2,700 feet and riding 75 miles. Murphy placed 148th out of 194 racers.

“In Michigan I consider myself to be a good descender,” Murphy said. “But I was outclassed by people who were blasting by me and pounding downhill for an hour.”

In the end, most everyone had a good time. They had come and endured. There were stories to tell and friendships formed. The riders had come from Columbia, Argentina, Mexico, Costa Rica, Belgium, England, Italy, the Netherlands and the U.S. among other places.

Murphy said he is going to hang up any thoughts of doing something big again in the near future. His wife Joni is looking to run a half-marathon in 2015. He plans to help get her there.

“La Ruta was blast. It was the ride of a lifetime. I don’t know how I could top it,” Murphy said.

He can say that now, but give him a while. I suspect he will find a way.