Food from the field: New women hunters take a shot at pheasant hunting

BELDING, MI — Trish Taylor had inkling that hunting would be fun. Her husband hunts. They share a bird dog too. So, when the opportunity arose, the 35-year-old public relations specialist from Allegan decided to pull the trigger.

Taylor recently joined 11 other women for a morning of clay target shooting and hunting live pheasants at a property managed by Pine Hill Kennels & Sportsman’s Club of Rockford. The Ladies Pheasant Hunt was sponsored by the Pine Hill Kennels, Pheasants Forever and the Michigan Department of Natural Resources.

“I didn’t even know how to load my shotgun,” said Taylor, who was given instruction along with the other women. This was the first time out for several of them; a chance to handle a shotgun, bust brush, and hunt behind a dog.

“It was something I have wanted to try and it was a lot of fun. They were incredibly patient,” Taylor said. “I have always cleaned and prepared the animals my husband has taken. I had the whole self-sufficient thing in my head. I’d rather eat something that came from the land and know where it came from. I thought: If I can do it myself, that’s great.”

As a 35-year old professional, Taylor fits a demographic that hunting and fishing organizations and agencies are increasingly hoping to bring into the fold in an effort to bolster sagging hunter numbers. Those numbers have declined over the last decade as older hunters have put-up their guns or passed away, and efforts to recruit young hunters have been met with modest success.

“In most hunting communities, people are in their upper 40’s to 70’s said Vanessa Thurgood, the program manager for an innovative program now in its third season called “Gourmet Gone Wild.” The program was created in 2010 by the non-profit, Michigan United Conservation Clubs in partnership with Michigan State University and the Michigan DNR. It operates with funding support from The Boone and Crocket Club, Great Lakes Fishery Trust and Hal & Jean Glassen Memorial Foundation.

“There is a gap between new hunters and old hunters. The main focus (of state 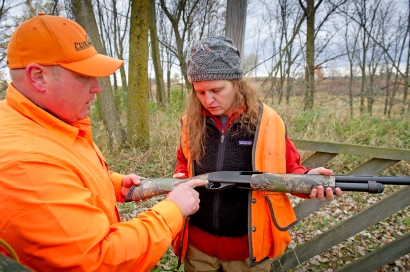 Trish Taylor recieves some instruction from Scott Brosier while shooting some skeet before the hunt. Photo: Dave Kenyon, Michigan DNR.

recruitment efforts) has been on youth,” Thurgood said. “We focus on young professionals because they are people who can go out hunting on their own where kids need someone to take them out.

“Our target audience is people between 21 and 40 years old, working white-collar professionals. We are trying to make them aware of the opportunities that are available to them in the outdoors, hunting and fishing, and we are doing that through food.”

Gourmet Gone Wild, which can be found online at gourmetgonewild.org, sponsors social events where wild game is served, prepared by a gourmet chef. They offer participants an opportunity to taste various game foods and learn how hunting is the epitome of “eating local,” a concern for many young professionals today.

More than 800 people have been introduced to Gourmet Gone Wild since the program began 2010, according to Thurgood. The events have been scheduled in a number of southern Michigan cities from Grand Rapids to Detroit. That is expected to change in 2014 as more events are scheduled in northern parts of the state.

The newest offshoot of the program is Gourmet Gone Wilder, a hands-on event that may involve hunting, fishing and/or preparing fish and game for the table.

“It’s a great program and I am glad to be part of it,” said Alyssa Wethington, of Plymouth, one of the hunters participating in the Ladies Pheasant Hunt. The 22-year-old MSU fisheries and wildlife graduate now works as an intern with Gourmet Gone Wild. Her day out, however, was not work, she said. She signed on to get some hunting experience.

“It was fun to be out with a group that had little experience. I shot at four or five birds and was disappointed that one I hit didn’t go down,” Wethington said.

Wild game and fresh fish are foods she enjoys. Wethington likes the idea of hunting and fishing as a means to eat and prefers it to “factory-produced meats.”

Taylor also thought about hunting as a means to feed the family. She describes herself as a “locavore,” at least for the most part; someone who prefers to eat foods produced locally whether that means shopping at local farmer’s markets or gathering it herself in the field.

“I went ice fishing five times last year and had fish over the winter,” Taylor said. “I got lamb and beef from a local farmer. I am about 90 percent committed to local eating. All of our vegetables come from local farmers.”

Both women said they will hunt again; Taylor is thinking about pheasant or grouse; Wethington has her eyes on wild turkey, and eventually, whitetail deer.

Thurgood said the program is blossoming. More people are learning of it as well as those in other states. A small percentage of those who begin with Gourmet Gone Wild have taken the steps to become hunters and anglers.

“We’ve seen a lot of interest from Texas and Indiana (natural resource agencies),” Thurgood said. “They want to use the Gourmet Gone Wild logo and event for what they are doing. The program is really starting to build steam. Next year we would love to reach out to 500 new people.

Gourmet Gone Wild is a clever idea and a smart way to reach out and introduce people to a very real upside of hunting – through finely prepared wild game meals that are paired well with beers and wine. If you haven’t heard of it, give it a look or check out an event. I have an inkling that it will catch on.