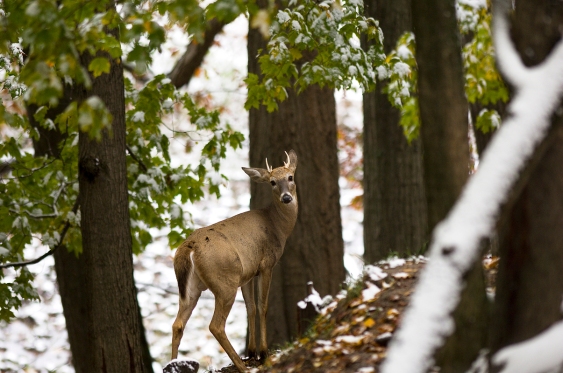 This deer would not be a legal kill where antler point restrictions are in place. Photo: Dave Kenyon, Michigan DNR.

I took some time off recently to sit back with Richard P. Smith’s newest book, “Great Michigan Deer Tales, Book 6.” Firearm deer season opens Nov. 15 and I was interested to see who he had written about. I enjoy reading about Michigan hunters and their trophy kills. Smith’s book is subtitled: “Stories Behind Michigan’s Biggest Bucks.”

Living in Grand Rapids, I wondered if anyone nearby had been listed. Indeed, there was. The story of Cedar Springs’ hunter, Jim Powell, and his successful 2006 bow hunt for a magnificent Kent County eight-point buck was there. So was Allegan County’s Peter Prather, who shot a terrific 20-point buck that same year with his muzzleloader.

What struck me most, however, was Smith’s introduction. Rather than wax eloquent about 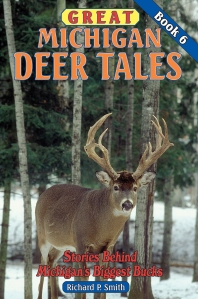 the glory of big bucks as one might expect, Smith, a long-time Marquette-based outdoor writer and ardent hunter, crafted a pointed argument against mandatory antler point restrictions which limit what deer hunters can shoot.

Their use is increasing in Michigan and that has many hunters upset. They feel strongly that they should be allowed to shoot any legal deer rather than have to pass on a smaller buck.

And, who can blame them. Deer hunting encompasses a lot of different things, not the least of which is the opportunity to get in touch with the land and to live off it independently, both in substance and spirit.

WHAT ARE ANTLER RESTRICTIONS?

Antler point restrictions (APRs) prohibit taking bucks with less than a specified number of points on each antler. Proponents are largely involved with the Michigan branches of the Quality Deer Management Association, a national non-profit group which espouses the philosophy that APRs help develop healthy deer herds with more mature and large-antlered bucks; and that passing up on small ones results in a larger deer next year.

Their pursuit is noble, to be sure, but should it be the law of the land?

APRs aren’t new. There are several varieties in Michigan depending on where the hunt 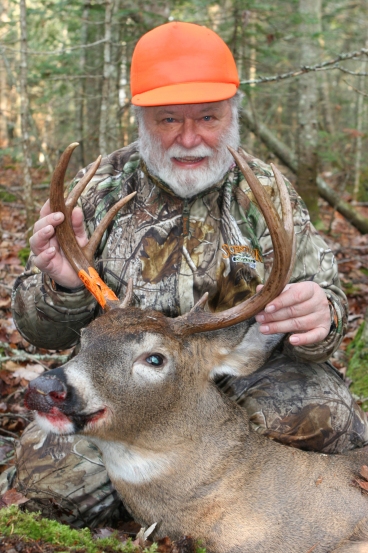 takes place. Only mentored youth are exempt from those rules during the state’s September Liberty Hunt. More details can be found in the Michigan Hunting Guide on the DNR website at: Michigan.gov/dnr

It should be understood that APRs are put in place only after a lengthy public process that requires substantial local support as well as a majority of the hunters there. But the results affect deer hunters from other areas too and that raises questions about what is fair.

For instance, hunters from Detroit, Flint, Ann Arbor, Saginaw or elsewhere who plan to hunt near Traverse City during the firearm season will need to be aware of new APRs now in effect for 12 northwest Michigan counties: Antrim, Benzie, Charlevoix, Emmet, Grand Traverse, Kalkaska, Lake, Manistee, Mason, Missaukee, Osceola and Wexford. Hunters there will have to pass on any buck with fewer than three one-inch points on an antler, and four points on one antler for a second buck.

YOUTH SHOULD BE ALLOWED TO SHOOT SMALLER BUCKS

Smith argues that the option should be left open for youth to shoot a smaller deer. He’s not alone in his defense of the practice. The issue has become controversial.

“The first buck bagged by many Michigan hunters is a spike horn, as mine was, but the size of those antlers does nothing to diminish the moment and experience. Nor should it,” Smith writes with passion. “The Michigan Department of Natural Resources (DNR) has lost sight of that and so have a group of Michigan hunters who are trying to change part of our state’s deer hunting heritage and tradition by not only making spike bucks off-limits to deer hunters, but fork horns too.”

Smith goes on to argue that voluntary restraint is just as effective and that if hunters want to pass up on a smaller deer, they have every right to do so, but requiring every hunter in an area to comply, just isn’t right. He maintains that almost every deer reported on in his books – big ones, mind you – are not the product of an APR-governed region.

“There’s absolutely nothing wrong with shooting a spike horn or fork horn, whether it’s your first buck or your 50th. For those who want to only shoot something bigger, voluntary APR is the way to go,” Smith writes.

LITTLE HARD DATA TO BACK UP CLAIMS

Brent Rudolph, the deer and elk program leader for the Michigan DNR, said “Both sides of this are “really passionate.” He said most of the harvest each year continues to be year-and-a-half-old bucks, but the state lacks solid biological evidence that APRs are producing older, more mature herds in Michigan. There just isn’t enough data, so far. But, he adds, it may be a matter of how and where the data is collected. That is being sought in greater detail. The new APRs in northwest Michigan should shed light on that in a few years.

“In deer cooperatives (voluntary agreements) there is more evidence of on the ground changes (in the deer herd),” Rudolph said. “They may wait until the deer are 3 1/2-years-old to shoot them and there is a noticeable impact. But where there are straight forward point restrictions, we don’t have a lot of data,” Rudolph said.

Hunters going out come Nov. 15 will want to be aware of where APRs are in place. Like them, or not, they are here to stay – at least for now. Meanwhile, if you are looking for something to read at deer camp, consider getting a copy of Smith’s latest book. You can find it at local bookstores or at:richardpsmith.com

It’s about the hunters who took big Michigan deer that grew large on their own. Imagine that.