Pheasant hunting: more birds if you know where to look 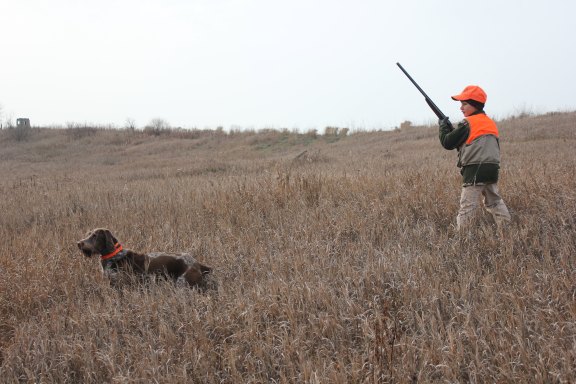 After three poor years of nesting success in Michigan, there is good news for pheasant hunting enthusiasts. The population is again climbing, according to state wildlife officials. Pheasant nesting success was good in June.

Pheasant hunting opens in the Lower Peninsula October 20. The 58-day season runs until November 14 and reopens from December 1 to January 1, 2014. Hunting in the Upper Peninsula, which opened on Oct. 10 for pheasants, continues until Oct. 31.

Ben Wickerham, the Michigan representative for Pheasants Forever, a national pheasants conservation organization, says he’s heard the same from chapter members around the state. His organization has been working hand-in-glove with the DNR, private land owners, and others in an effort to create pheasant cooperatives, essentially large tracts of land that will contain acres of high-quality pheasant habitat. The program is called the Michigan Pheasant Restoration Initiative .

“A lot more adult birds came through this year’s nesting season,” Wickerham said “I heard about them anecdotally, but the (mail-carrier) brood counts confirmed them.

“We’re hearing that they are showing up in some unexpected places, and not necessarily the usual place where a guy has always had one crowing behind his house.”

Hunting pheasants once most popular

Pheasant hunting was once the pinnacle of Michigan’s small game hunting season.

More than a million birds were harvested annually during its Golden Era in the 1940’s and 1950s. That’s when 500,000 hunters pursued them each year.

The joys of working a dog and flushing a rooster pheasant once drew 500,000 Michigan hunters to the field each fall. Photo: Dave Kenyon, Michigan DNR.

Ringneck pheasants were introduced to Michigan in 1918, according to DNR historical records. That population grew quickly and Michigan held its first pheasant hunting season in 1925. There was ample pheasant habitat to go around. Land access was abundant and hunters enjoyed good hunting well into the 1960s.

Then harvest levels began to drop and hit what state officials have called “a low” in 1986, when just 84,000 birds were shot by 85,000 hunters. Pheasant hunting’s popularity also declined as bird numbers fell. Their demise is largely due to the loss of grassland and wetland habitat, the conversion of farmland to high-yield cropping practices and outright development. Their food and protective cover steadily disappeared.

Enter 2010: the most recent year that the DNR has recorded figures. About 27,450 hunters went out for the season. They reported shooting 27,224 pheasant roosters. DNR officials expect about the same today.

Wickerham said the Pheasant Restoration Initiative can, and is, helping to improve conditions for pheasant in a number of areas including on public lands.

“Where I would want to be opening day is the Todd Farm, the Fennville Farm Unit, in west Allegan County, Wickerham said. “Our Allegan County Pheasants Forever Chapter has been having a ball there with the pheasant initiative. “The cover there is well established and pheasants are using it.”

PF chapters have developed habitat on more than 1,100 acres of public land this year, including parcels at the Verona, Sharonville and Maple River state game areas, on some areas in the “Thumb” and Lake Hudson Recreation Area in Lenawee County. All are expected to provide decent pheasant hunting.

The goal, he said, is to restore or enhance 2,000 public acres a year. Pheasant habitat work is also being planned for the Gratiot-Saginaw State Game Area, Shiawassee and Rose Lake state game areas.

Hunters who want to chase pheasant this season would do well to consider many of these areas.

“Verona (in Huron County) has long been a destination for pheasant,” Stewart said.

Stewart suggested pheasant hunters also look to the DNR’s Hunter  Access Program for leads on parcels to hunt. Jackson, Hillsdale, Lenawee and Eaton Counties all have properties where pheasant can be found.

Michigan’s pheasant hunting scene is likely never to return to the fabulous conditions of yesteryear – there are far too many economic, social and political hurdles – but the work that is being done to establish good pheasant habitat on the ground is deserving of kudos all around.

And maybe, just maybe, with continued attention over time, those efforts will produce conditions that more pheasant hunters can look forward to.

3 Responses to Pheasant hunting: more birds if you know where to look