Posted on September 26, 2013 by Howard Meyerson

GRAYLING, MI  – More than 900 trees were airlifted into strategic locations along the 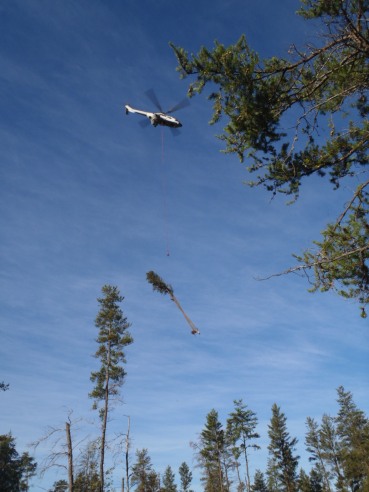 A helicopter was used to move trees from state land to the AuSable River to create fish structure. Photo: Michigan DNR.

AuSable River South Branch this month in an effort to improve the river’s brown and brook trout population.  Adding large woody debris to the river is expected to provide good structure for adult fish and protected nurseries for young trout, according to state fisheries officials

The tree-lift was the last of a series of planned AuSable improvement projects that began in 2000 with the development of the AuSable Headwaters Restoration Project. The $2 million effort involved the creation of sand-traps on the AuSable River North and South Branch, modification of the Grayling Dam and restoring woody debris throughout the river system.

“This was the last of our promise to anglers,” said Dave Borgeson, the Northern Lake Huron Unit supervisor for the Michigan Department of Natural Resources. “Now we will wait a year and a high-water cycle to see how these structures fare and then do a follow-up.

“Historically, there were a lot more log jams on the South Branch. They got cleared out when logging was at its peak and the recruitment (of new logs) was altered because all the big trees were cut.”

A total of 972 red pines, oaks and jack pines were lifted in by helicopter during the first week of September. They were flown in from timber management operations in the Au Sable State Forest and positioned on the river all along the Mason Tract and down to the confluence with the AuSable mainstream.

The Mason Tract, which is split by the South Branch, is well-known for brook trout and brown trout fishing. It pulls anglers from all over the country who relish its wild character.  The 4,493 acre property is named after the late George Mason, an industrialist who purchased 1500 acres as a private retreat in the 1930s. He later bequeathed the property to the state and its boundaries were enlarged – providing ready public access to 11-miles of prime trout fishing water.

“It’s a gorgeous stretch of water,” said Bruce Pregler, president of Anglers of the AuSable. “And it is starting to look like what it was before the area got timbered.

“This (project) is a very good thing. What we have found is that within 24 hours of putting in streamside habitat, whether trout hotels or large woody debris, the trout start to inhabit the area.”

A 2010 DNR shocking survey conducted along 900 feet of the South Branch at Smith Bridge on the lower end of the river found 419 brown trout per acre, ranging from 2 to 20 inches long. The survey also recorded 505 brook trout per acre from 1 to 9 inches long.

The findings were in keeping with those from other years, which sometimes ran higher and sometimes lower. The variability is due to a variety of changing natural conditions, according to Borgeson, but the long-term averages will be significant to watch. The new tree placements could bring about a change.

“Eighteen inch browns can be found throughout the Mason Tract,” Pregler said. “On average the brookies are 8 to 10 inches long and the browns are bigger. If go out mousing, or out for the Hex hatch, you will get some big fish.”

The $2 million restoration project has involved moving nearly 10,000 trees to one or another of the AuSable River’s branches. Funding for the project came largely from the federal Sportfishing Restoration Act with funds from the state habitat improvement account.

“This year’s effort was a follow-up to fill in areas that were still sparse on the South Branch,” Borgeson said. “As we’ve gone through this we have found that the big complexes of trees are showing real benefits.”

Nearly 10,000 trees dropped into the AuSable River since 2002. Here’s a quick look at how many and where.

After more than 30 years in the outdoor writing business, you would think I'd know better.
View all posts by Howard Meyerson →
This entry was posted in Uncategorized. Bookmark the permalink.