TWIN LAKES, MI – With the Labor Day holiday weekend ahead, often a last-hurrah for outdoor weekend warriors, Manistee National Forest staffers say they plan to be on alert for rogue off-road-vehicle riders in the forest.

By rogue, they mean those who are ripping up the countryside, riding off the designated ORV trail system, and those who would ride around barriers and/or smash gates.

“We put things up and they get torn down,” said Diane Walker, assistant ranger for the forest’s Baldwin ranger district. “They have this beautiful national forest outside their doors and I don’t know why people think it’s OK to go outside and tear it up.”

Tear it up, indeed. I visited recently with forest staff and toured one of the more extreme ORV damage areas in the southern part of the forest. It’s near the Cedar Creek Motorsports Area, a designated 24-mile single-track trail for quads, motorcycles and smaller ORVs.

The vandalism and landscape damage was not on the ORV trail. It was on areas adjacent to the trail. Cedar Creek is the southern-most trail in the forest, the closest for riders from Indiana, Ohio, Grand Rapids, Muskegon and other areas.

Riders have been going off-trail and created a web of illegal trails, deeply eroded hill climbs and denuded valleys where entire forest bowls have been scrubbed of vegetation by spinning wheels, and left as barren sand.

I am rarely speechless about these kinds of things. And that wasn’t the case this day, but I was astounded by the extent of the damage and found myself resorting to simple, one syllable exclamations under my breath.

Taken to the extreme

“There are bunch of legal places that people can ride, but they get bored and go off the trail and create hill climbs and runs. We have some cuts (eroded by illegal use) that are five- to 10-feet deep,” said Dave Jaunese, the Baldwin district trail coordinator. “They will never heal.

“This is one of the most extreme examples of what we deal with. We have a lot of areas with one, two or three runs, but we don’t have many areas with 50 runs like this.” 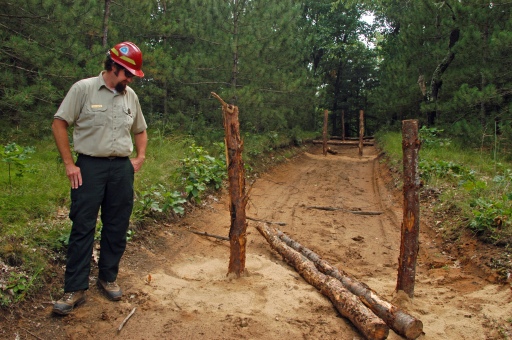 ORV damage in Michigan is not a new story. It has a long and sordid history, one of riders that thumb their noses at the rules, too few law enforcement staff to go around, and politicians that prefer to ignore it.

State and federal officials say it continues even though the organized ORV community has contributed positively to various public education efforts that target illegal riding.

Jaunese was guiding me through a 25-acre area where exhaustive restoration work was underway. Seasonal staff had built structures designed to let the landscape heal. Chris Frederick, the new, acting ranger for the district, had joined us to learn more about the work on the ground.

The Cedar Creek restoration project is funded by grants from the state ORV program, from money collected each year from the sale of ORV trail stickers that trail riders are required to buy. No less than 12 percent of sticker sales are made available for restoration – a figure determined by law.

The money goes for damage associated with designated ORV trail systems. Top priority is damage that degrades waterways like Cedar Creek where sand was migrating due to erosion from ORV damage.

All three phases of the work near Cedar Creek will cost approximately $90,000, according to Jaunese. Phase III will wrap-up next year assuming it is funded by the state ORV program.

In all, Jaunese estimates that the Baldwin Ranger district has 1,000 acres of ORV damage. Not all of it can be funded with state restoration grants. That money goes only to damage associated with the designated ORV trail system.

Any other work comes out of the national forest’s internal budget, one Walker says, is shrinking. The Baldwin Ranger district now spends $50,000 to 75,000 on average each year to fix ORV damaged areas, using its own money and state grants. 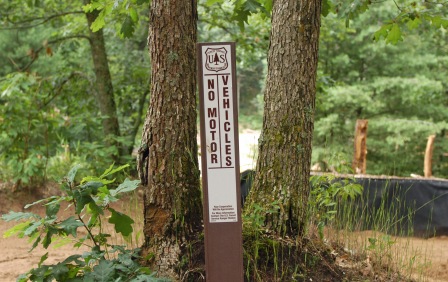 Rogue ORV riders have gone into posted areas and torn out some of the restoration work being done. Photo: Howard Meyerson

from migrating, along with stopping riders.

“We had some vandalism out there since we looked at it last week,” Jaunese wrote me in an e-mail after our visit. “They destroyed three sections of fence and drove over some brush and then pulled out some water bars. It is fixed now, but very frustrating…”

National forest staffers say the area has suffered from a lack of law enforcement patrols. It is an hour south of the Baldwin Ranger Station. The district is short-handed.

But they plan to keep an eye on the area, hoping to dissuade those who come up to ride, many who have no idea they are into something illegal having been told by a buddy that it’s a good place to go and no one is looking.

“It’s a small percentage of the users that cause the damage,” Jaunese said, “but it taints the other groups.”

That’s for sure. Frederick described a “certain element that has $10,000 sunk into their ATVs and they come out to the area on a gamble.”

“If they get a $170 ticket, they say ‘That’s cost of riding out here all season and I’m willing to pay that,’ Jaunese added.

“We are always on the lookout for illegal ORV use and especially on holiday weekends.”

Labor Day weekend, he said, will be no exception.