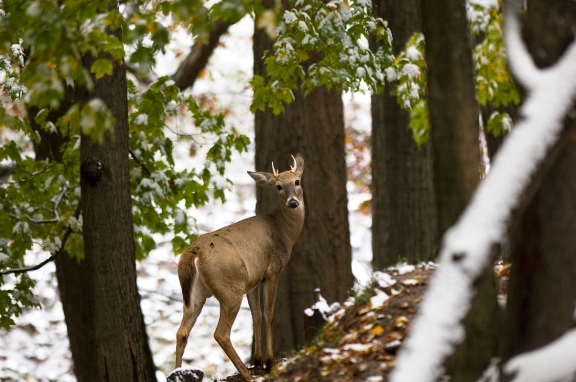 Fork-horns like buck will have to be passed up when hunting Michigan’s northwest Lower Peninsula. Photo: Dave Kenyon, MDNR

Lansing — Deer hunters planning to hunt bucks in northwest Lower Michigan this fall will need to look closely before they pull the trigger. A new mandatory antler point restriction was approved by the Natural Resources Commission in June for 12 counties in the northwest Lower Peninsula.

“It pretty much covers the entire northwest region of Zone 2. We were very pleased with the final decision,” said Ryan Ratajczak, president of the northwest Michigan branch of the Quality Deer Management Association. “The data we collected indicated that seven out of 10 hunters (surveyed) want the regulations. We’re glad the NRC supported the process and followed through with approving it.”

Getting approval for antler point restrictions is a lengthy process. DNR wildlife staffers first survey citizens in the proposed area to gauge approval for the change. At least 50 percent of the people contacted have to respond to the survey, then 66 percent of the hunters who respond must approve of it. The proposal is then brought to the Natural Resources Commission.

Ratajczak’s organization began pushing for the change in 2011, first attempting to get APRs in Benzie and Grand Traverse counties. Both are adjacent to Leelanau County, which already has the restrictions.

“It made more sense to look at a bigger area,” he said. “So we really had to expand our resources, but in the end it worked out pretty well.”

The DNR mail survey of 2,000 hunters generated an 80-percent response rate, and 69 percent of the hunters who responded  approved of the regulations, according to state wildlife officials.

“People come out all over the place (on these proposals),” said Brent Rudolph,” the DNR’s deer  and elk program leader. “Some say they oppose point restrictions, that they are not sure it’s worth it. Some say: ‘Where I hunt, I don’t think I’ll see deer that meet the criteria.’

“Some of the folks in favor of this have said it’s an expansion of the Leelanau County restriction, and that is kind of true,” Rudolph said. “Leelanau has had it for 10 years. I assume (in this case) they have seen or heard of positive results (in Leelanau County).”

Ratajczak said harvest data from Leelanau County show hunters are killing as many bucks as they did before antler restrictions were implemented and that “the bucks are bigger.” The number of hunters who hunt there has not declined, suggesting that antler point restrictions do not drive hunters away.

Michigan has five other deer management units where antler point restrictions exist. Those include DMU 117 on Drummond Island, DMU 122 at Norway in the western Upper Peninsula, DMU 245 on South Fox Island, DMU 145 in Iosco County, and DMI 115 on Beaver Island.

“We have seen all sorts of conclusions and ideas after restrictions are put in place, but some of those are flawed in their reasoning. We haven’t seen dramatic changes and have no evidence of it,” Rudolph said. “But it (antler restrictions) is not something we see as a concern, so we let it play out.

“With these 12 counties, we’ll be in a position to have better data afterwards.”

After more than 30 years in the outdoor writing business, you would think I'd know better.
View all posts by Howard Meyerson →
This entry was posted in Uncategorized and tagged Conservation, Deer, DNR, Hunting, Lower Peninsula of Michigan, Michigan Department of Natural Resources, Wildlife. Bookmark the permalink.