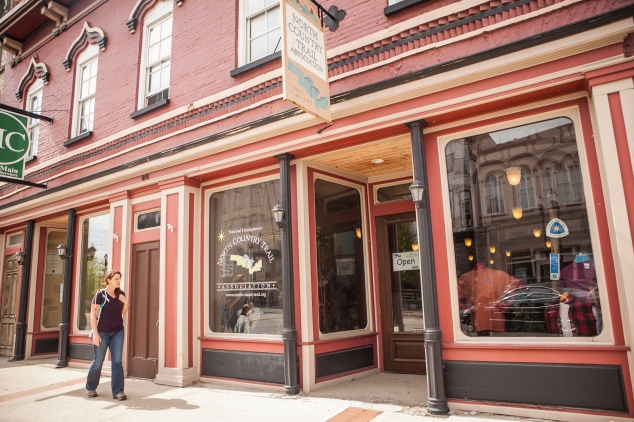 The national headquarters for the North Country Trail Association is found in Lowell. Photo Brandon Mulnix

Saturday was National Trails Day, a celebration enjoyed by people all across the country. Hikers took to their favorite trails, venturing out with friends, family and organized groups.

In Michigan, of course, there is reason to celebrate trails every day. Local and state governments and non-profit groups do a terrific job developing them.

But one trail stands out as especially worthy of celebration, one surprisingly that often goes unnoticed. Its development takes place in the quiet recesses of our forests and in one-on-one meetings between landowners and well-intentioned volunteers.

More than 1,100 miles of the North Country National Scenic Trail is routed through Michigan’s Upper and Lower Peninsula. The 4,600 mile trail stretches from New York to North Dakota, making it the nation’s longest footpath.

Roughly 750 miles are on the ground in Michigan and ready to use, its route marked clearly by blue blazes; a path that meanders in and around farms and woods to the south and through state or national forests, national lakeshores and wilderness further north.

It is largely the product of volunteers, the communities of hikers who diligently carve out and maintain the route. Their efforts are creating a big economic asset for the State of Michigan.

I am old enough to remember the wilderness wars in Michigan, back in the ’80s when the late Sen. Joe Mack from Ironwood, an ardent opponent of wilderness, proclaimed to the Michigan legislature that backpackers came to the Upper Peninsula with one pair of undershorts, one five dollar bill and didn’t change either while there.

How wrong he was. But those were different times. We have learned a lot since, and the outdoor recreation landscape has changed dramatically.

Non-motorized trails provide a huge economic stimulus to the state and local communities. People travel to use them and spend money to do so. They buy guide books and gear, new hiking boots and apparel, food, gas, lodging and a multitude of things while traveling.

Hikers stop to chat along the North Country Trail which is marked by blue blazes. Photo: NCTA

A 2013 study by the Outdoor Industry Association, a national trade group, found 2.1 million people participate in non-motorized trail activities in Michigan. They spend $1.7 billion a year on average for those activities. That group, largely human-powered and on foot, was calculated separately from those who ride bikes on or off-road, another 2.6 million people who spent $1.57 billion, hardly chicken-scratch.

Looking more to connect with communities

North Country Trail Association staffers now say they, too. are learning the value of their trail and have switched gears in recent years to make more connections with communities along the seven-state route.

“We have eight North Country Trail Towns designated, and five of them are in Michigan,” said Andréa Ketchmark, director of trail development for the North Country Trail Association, the national organization that coordinates volunteer chapter efforts across seven states. NCTA’s national headquarters is located in Lowell, along with the National Park Service office that manages the federal trail.

“Our earlier thinking was to stay away from cities. Now, we see them and say ‘let’s duck into that town.’ We have long-distance hikers who use them for resupply, but the vast majority of trail users are people in the (nearby) communities,” Ketchmark said.

Lowell is soon to become the latest NCT Trail Town. A celebration is planned for 5:30 p.m. July 11, part of Lowell Riverwalk Festival where a new trail mural will be unveiled in town. The other Trail Towns include Middleville, Kalkaska, St. Ignace and Petoskey, which held a celebration Saturday.

Having a Trail Town status makes the community a trip destination, a staging area for hikers. Trail Towns also provide benefits for the trail. The communities that take on the mantle agree to embrace it and give the trail its due as community planning decisions goes forward.

Michigan trail enthusiasts are fortunate to live in a state where trails get so much attention, whether from local park departments, community and other foundations, state non-profit groups or the Department of Natural Resources and Governor’s office.

They are fortunate, as well, to have such a unique and special federal trail running through the state. The NCT is part of the country’s national trail system, part of the country’s trail heritage. It can, and likely will, rank up with its better-known cousins, the Appalachian Trail, Pacific Crest Trail or Continental Divide Trail, once it is finished.

Each of the others has a national profile that is well-recognized by hikers all across the country. Each possesses a special cachet that makes their presence on the national landscape unforgettable.

For local communities, they are something to celebrate. If you get a chance this summer, get out and hike a section.