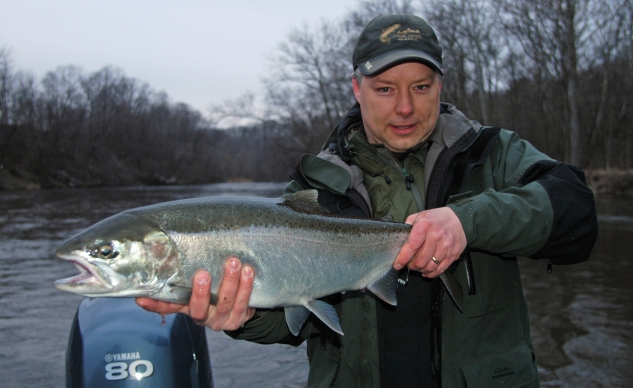 GRANT, MI — Anticipation is always a big lure when fishing, particularly as the seasons change from winter to spring. Fresh steelhead runs show up on many Michigan streams and this particular morning was no exception.

Captain Terry Weiler was doing what he does best, deftly positioning his nearly 18-foot Rivermaster on the Muskegon River so our spread of lures would cover the water. We were looking to entice one of the fresh fish that had come upriver to spawn.
And, it wouldn’t be long before one cooperated.

“Nice fish,” someone said as Aaron Kamphuis began reeling it in. Weiler set the anchor, dropped his oars and grabbed a landing net. It was 7:30 a.m. Things were looking good.
Kamphuis, an avid angler from Rockford, beamed as he held up a nice silvery, six-pound female for all to see. It was a good-looking fish and one of three we would boat on a cold, gray day that threatened rain.

Weiler, the owner of 5-19 “At Ease” River Charters, 519atease.com, immediately went back to work, guiding his boat down and around the bend, working the underwater structure. Weiler enjoys controlling the boat’s backward drift using a set of oars rather

than his motor, although sometimes he resorts to a small kicker-outboard he has attached on the stern of his jet boat.

I had joined him for a day of fishing with Kamphuis and Scott Dixon, also from Rockford. We were all anticipating a lot of action and had set out on lower section of the Muskegon River, one Weiler knows well.

Water levels were good, not high, and not low.
High waters can present more, or less, opportunity to fish them. Steelhead might spread out in the river or simply continue upstream.

“It’s all about what’s underwater here, the rocks and structure. I target areas from five- to 10-feet deep,” said Weiler, a contract administrator for Spectrum Health who runs his charter service on the Muskegon and Manistee Rivers for steelhead and salmon. He fishes the Muskegon from mid-October to the end of April.

But another hour or so would drift by. Then Dixon landed a second, much smaller fish, one he opted to return to the river. The conversation by then had turned to what wasn’t happening. There seemed to be fewer fresh fish in the river than expected. What fish we did see also seemed smaller.

“I was anticipating a new fresh run,” said Kamphuis, an avid steelhead chaser who often fishes the river in his own boat. “The last week of March and the first week of April are usually when the run is peaking and starting to dissipate. But this year, it hasn’t even come close. It’s early (in the run). It’s been cold, very cold.”

State fisheries managers agree. Spring steelhead runs were late this season, the result of a late spring and colder temperatures. While southern streams began to see runs
early-on, mid-state and northern streams did not get the usual numbers in early April.

“We saw a push in March and quite a few fresh fish on the Grand (in early April), but the run (overall) is about two weeks late,” said Jay Wesley the Michigan Department of Natural Resource’s southern Lake Michigan management unit supervisor.

Late enough, he said, that the DNR’s annual steelhead egg-take on the Little Manistee River had to be postponed to the middle of April. Those fish usually arrive at the start of April, but none had been seen.

Smaller steelheads also were being reported, the effect, Wesley said, of the diminished 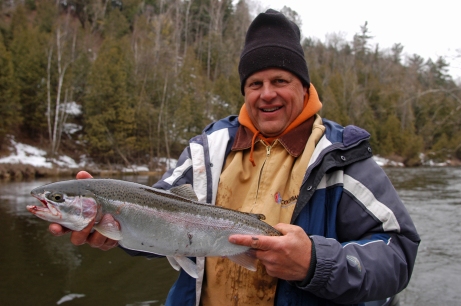 forage base in Lake Michigan. The declining alewife population in recent years has resulted in less food being available. The average is five to six pounds rather than seven and eight pounds.

“Steelhead will eat alternative prey, but they get a lot bigger when there is a lot of forage out there,” Wesley said.

On the river, Weiler soon opted to change tactics, to switch from dragging crankbaits like Wiggle Warts and Hot N’ Tots to floating small spawn sacks under bobbers.
“The bite is better in the afternoon” Weiler said.

That is about when Dixon broke out the fried chicken, saying he didn’t have many expectations. It was his first day out fishing this season. There would be many more ahead.

“I just want to catch fish,” Dixon said. And, he would.

It was just before noon that he would land another steelhead, this time a much larger, fresh, silver female.

It had come up from the bottom and whacked a green spawn sack. One minute his bobber was floating, the next it was gone.

“That one went down; it just went straight down,” Dixon said, and we would finish our day three for five, having a couple of other hits that never got landed.