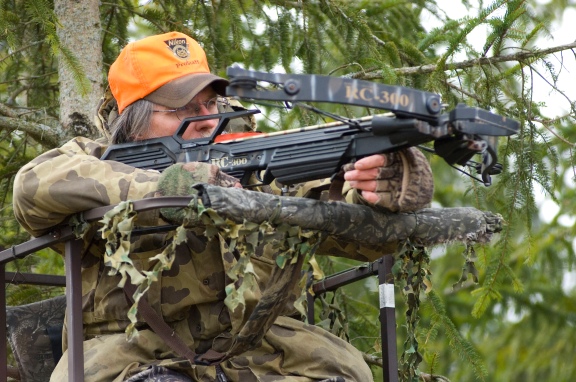 For all the uncertainty and angst that surrounded crossbows in 2009 — the year the Michigan Department of Natural Resources allowed their more widespread use by hunters during the archery deer season -— it seems that only good things have come of it.

“The outcome is pretty good,” said Brent Rudolph, the DNR’s deer program expert speaking of a recent agency report examining crossbow use from 2009 to 2011. “It provided some additional opportunity (to hunt) with no drastic negative impact of any sort.”

DNR wildlife staff promised to assess crossbow use and its impact on Michigan’s deer after three years. That was to address the concerns of some in the bow hunting community. They feared the archery season would be shortened if bow hunting ranks swelled suddenly due to an influx of gun hunters and a corresponding dramatic increase in the archery harvest.

Critics of the crossbow

Critics said the crossbow made killing deer easier and required less skill than normal bows. Crossbows can be equipped with a scope, can be cocked and do not require strength to hold a bolt back without strain. They are fired like a rifle by pulling the trigger.

They envisioned an army of crossbow-toting gun hunters invading woodlots and fields all over the state all hoping to extend their season. It was, for many, an insult to their sense of tradition and long-honed skills as an archer.

In fact, some gun hunters did enter the bow season using crossbows. And former archers, who had given up on bows, also returned with a crossbow. But the resulting increase in crossbow kills was offset by a simultaneous decline in firearm kills and a decline in hunter numbers overall. The net result was no significant impact on the herd, Rudolph said.

“Removing the age restriction resulted in a corresponding jump, but did it have an overall impact on deer? No,” Rudolph said. “There was a (seasonal) shift (in kills) but not to the point that there is a need to do anything of that nature (shortening the season).”

Rudolph was referring to the age restriction that was dropped in 2010. It specified that hunters had to be 50 or older to use a crossbow in the northern part of the state. Once that was lifted, crossbow numbers climbed substantially.

Prior to 2009, only those with disabilities were allowed to hunt during the archery season using crossbows. The push to expand the season came largely from older hunters who were no longer able to use a regular bow due to aging shoulders or other conditions, and by those who thought crossbows would stimulate interest among youth and make it easier for them to get involved with bow hunting. Their hope was that it would stem the downward trend in hunting participation overall.

“The main objective in allowing crossbows was to see if we could successfully recruit hunters and to see if it was a sustainable approach to hunting deer. We thought both were possible,” Rudolph said.

“We were successful at stopping or reversing the decline in the archery season each year, but it did not have a dramatic impact on hunting participation.”

The entire report can be found on the DNR website at: michigan.gov/dnr. (Click Hunting and Trapping, then Wildlife Surveys and Reports.)

A total of 77 percent said that crossbows were easier to use, required less time to develop proficiency and were more accurate than other types of bows. The respondents also said they were more confident of killing a deer with a crossbow.

The DNR deserves kudos for doing the survey. And crossbow hunter’s need to step-up and get counted more fully: Only 60-some percent of crossbow hunters got the required free crossbow stamp, the one that helps the DNR know who to survey.

The future of cross-bow hunting is likely to be secure in Michigan, but without more accurate data in the future, the results will always be a limited snapshot of how crossbow use is impacting the deer herd and hunting in Michigan.

• Archers using a crossbow had higher success than all archers combined and the addition of crossbows to the mix increased total archery success by two to four percentage points.

• An estimated 118,573 hunters used crossbows in 2011 and approximately 74 percent of those (excluding those who had crossbow permits for disabilities) had hunted in one of the three archery seasons prior to 2009.

After more than 30 years in the outdoor writing business, you would think I'd know better.
View all posts by Howard Meyerson →
This entry was posted in Uncategorized and tagged Archery, Bowhunting, Crossbow, Deer, Deer Hunting, DNR, Hunting, Michigan Department of Natural Resources. Bookmark the permalink.