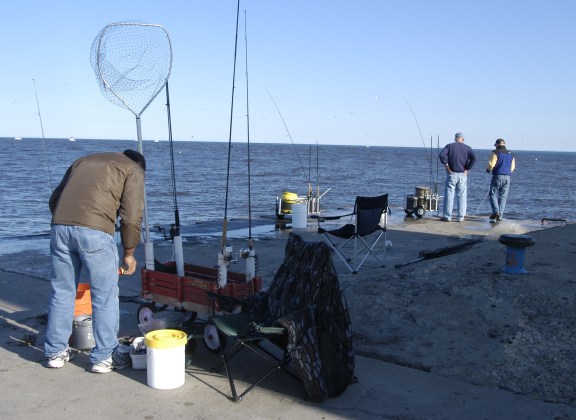 A draft five-year plan to guide where state fisheries managers will focus their future efforts is getting mixed reviews from anglers and fishing groups, who largely support it but criticize its lack of specificity.

The public comment period for the 32-page strategic plan closed on Feb. 10. The document and accompanying survey results can be found on the DNR website: under Fisheries.

“The overall work product was good; they came up with goals, objectives and strategies, but I was disappointed with its lack of specificity, said Dennis Eade, executive director for Michigan Steelhead and Salmon Fisherman’s Association. “The most glaring (omission) was any mention of gaining additional public access to lakes and water resources in southwest and southeast Michigan.

“We would have loved to see them say: We will increase public access by 10 percent by 2015, something they could be held accountable for.”

State officials say those details will come later in operational plans for each of the goals. The strategy was intended to lay out high-level goals and objectives.

“That’s a problem everyone encounters with a strategic plan which by definition is lofty in its goals,” said Jim Dexter, chief of fisheries for the Michigan Department of Natural Resources. “What should be most important is the public knows where we want to go.”

“We took an 8 percent budget reduction in 2012 from $29.1 million to $27.3 million. That’s huge,” Dexter said. “Our funding model is broken. We operate totally on a user-pay system and number of users has been going down steadily.”

The draft plan establishes five specific goals with multiple objectives and strategies for each. The broad goals are:

“This is a five-year plan and it is the first to have public review other than by major constituent groups,” Dexter said. “We are clearly providing what we believe needs to happen and what would be most beneficial based on what we heard through the survey and other contacts.”

The strategy also makes a clear in a “What If” section that more adequate and stable funding is needed to achieve all the listed goals and what will happen if those funds cannot be found.

It states, for instance, that without adequate funds there is a greater risk of fish mortality in hatchery production, one or more hatcheries may be closed, and that staff will be less available to investigate large fish kills, among other things. Walleye production and muskellunge, brown trout and northern pike could all be reduced. Other reductions are listed in every goal category.

“What If” also specifies what could be accomplished with additional funds, including: increased steelhead production, the development of cool water production facilities, purchasing a new boat for Great Lakes research, seeking new access to fisheries in urban areas, and adding staff among many other things.

“We took an 8 percent budget reduction in 2012 from $29.1 million to $27.3 million. That’s huge,” Dexter said. “Our funding model is broken. We operate totally on a user-pay system and number of users has been going down steadily.

“Right now we are projecting a $1.5 million deficit come October. Look at the “What If” list in the plan and you will see some of the things that will start to disappear. That’s what we know is coming.”

Frank Krist, a member of the Hammond Bay Anglers Association chairman for the Lake Huron Citizens Advisory Committee said he liked the plan overall. He favors the DNR working in partnership with groups and says there is more need for the public education and angler recruitment, both called for in the plan.

But Krist is worried about the funding issue. He called it “the biggest obstacle” to moving forward.

“We haven’t had a fishing license fee increase since 1996. That makes it difficult,” Krist said.  “I think they made points of real importance in the “What If” section.”

Denny Grinold, chairman for the Lake Michigan Citizens Advisory Committee and a charter captain out of Grand Haven, said he thinks anglers would be willing to pay more for a fishing licenses knowing what they would get for the increase. He said the DNR fisheries division is understaffed to do the work needed for invasive species control and monitoring, among other things.

“I would also like to see more law enforcement on the water,” Grinold said. “On the Great Lakes there are instances of people overfishing, going out several times per day. There is overfishing on the piers.”

Bryan Burroughs, executive director for Michigan Trout Unlimited also wanted to see more specifics. His group has been pushing for greater focus on inland fisheries, in particular for trout. Burroughs said the plan was too vague.

“There is some good stuff in this report, but you can read it and be left skeptical,” Burroughs said. “Things sound good, but you can’t tell how they will do anything differently. I didn’t get a sense of their priorities other than general ones.

“We’d like to know the details. How will they address invasive species? Which employees would be shifted to look for Asian Carp? How much will they spend? We’d like to see more social and economic science. Will there be a research budget?

“One of our big priorities is to see an inland trout management plan developed in the next five years. But that’s not explicit in this plan and it is huge for us.”

“I didn’t see anything that wasn’t missing intentionally,” YoungeDyke said. “It recognizes that fisheries and fishing are not just recreation but is also an economic driver. They were on-point calling for more fish habitat work. And what they show is a need for stable, outside funding.”