Michigan daily salmon limit to stay at five in 2013 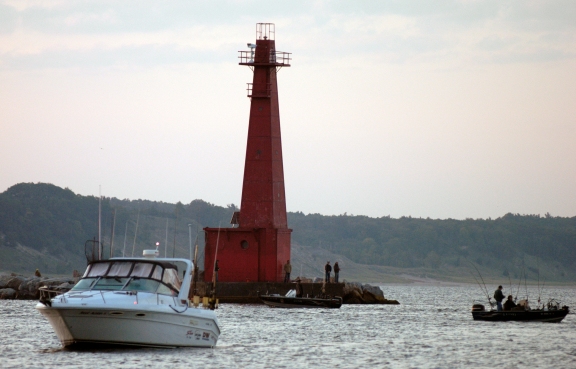 Anglers will be able to keep five salmon per day again in 2013. Photo by Howard Meyerson

GRAND RAPIDS, MI – Anglers will again be able to keep five salmon per day in 2013. Salmon fishing was that good this year. Many reported excellent Chinook salmon fishing throughout the summer on Lake Michigan.

But state officials remain concerned about a dwindling lake forage base. They suggest this year’s success may hint of trouble to come.

The five salmon limit will stay in place, they say, to reduce pressure on the alewife population which has been found to be at low-ebb.

“Typically we see catch rates go up when Chinooks are in prey search mode. They are more apt to grab a spoon than when there is a lot of bait out in the lake,” said Jay Wesley, the Michigan Department of Natural Resources southwest Michigan fisheries supervisor.  “It indicates the fish are on the feed more, or that there are a lot of fish out there when there is not enough bait to support them.”

Michigan raised the salmon limit to five per day limit in 2010 after limiting anglers to three for many years following the late 1980’s Lake Michigan Chinook salmon crash due to bacterial kidney disease.

Whether the limit is five or three on any given year is based on two criterion.  It stays at five if more than 13 percent of charter anglers catch three salmon per trip; also if the catch rate is .165 salmon per hour or better. If they catch less, the daily limit goes to three the following year.

“The bag limits got close to the benchmarks over the last three years,” Wesley said. “The catch effort per hour averaged .25 fish for 2009, 2010 and 2011. This year it jumped to .35 fish per hour and the catch per day average that was around 15 percent over those years jumped to 27 percent.

“It was a fantastic year and the best in the last 15 to 20 years, but is it sustainable? Probably not.”

The decision to maintain the 5 salmon limit was announced at the Lake Michigan Citizens Advisory Committee October meeting in Grand Haven. It got little fanfare, according to Wesley, but some charter anglers are concerned.

Ed Stowe, a 32 year veteran fishing charter captain from Ludington said he prefers a three fish limit. That’s plenty, he said, for a majority of his customers who return the next season and still have year-old salmon in the freezer.

But “the waste issue” as he puts it, is only part of his concern. Stowe disagrees with the DNR about the alewife situation.

“We have them all year-long. I don’t know about the southern part of the lake,” said Stowe, owner of Stowaway Charters. “We just had one of the best years we’ve had – limit catches and all of them were full of alewives that were six and seven inches long.

“In Ludington, Pentwater, Manistee and Frankfort, we have seen more bait fish of various sizes, not just the little one and two inchers.”

Captain Phil Retherford, owner of Catch-A-Bunch Charters in Grand Haven, agrees that salmon fishing was good in 2012. But he is indifferent about the daily limit.

“It doesn’t matter,” Retherford said. “Overall we had a good year and a lot of walk-on customers. A small percentage of them care (about the limit).  They come on the boat and say: ‘How many can we catch?’ When they find out five, they say ‘Oh wow.’”

Other social factors that pushed the daily salmon limit from three to five in 2009, when the proposed change was discussed, are less of a concern these days, according Dennis Eade, executive director for the Michigan Steelhead and Salmon Fishermen’s Association, better known as the Michigan Steelheaders.

Gas prices were higher then. His membership is largely recreational anglers. They were concerned about the cost to travel from the east side of the state to Lake Michigan. They wanted to keep as many salmon as possible when they made the occasional trip.

“If you want to fish kings you can go north on Lake Huron. It’s not unusual to catch two or three different kinds of fish there. The walleye and steelhead fishery has come back so well they (the anglers) have reprogrammed themselves.

“We are pleased the limit remained five for next year,” he said. “We are concerned about the forage.  If more adult salmon are removed, we are more likely to keep a forage base.”

After more than 30 years in the outdoor writing business, you would think I'd know better.
View all posts by Howard Meyerson →
This entry was posted in Uncategorized and tagged Alewives, Chinook, Coho, Creel Limit, DNR, Fishing, Forage Base, Michigan Department of Natural Resources, Salmon. Bookmark the permalink.