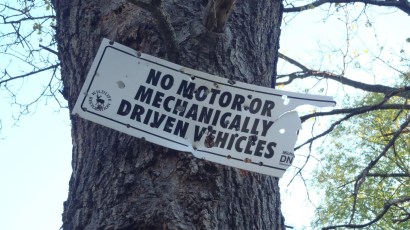 ALLEGAN – Maria Albright was disappointed recently to find that vandals had damaged a new sign at the Michigan Department of Natural Resources Echo Point Shooting Range. The sign had been built by Eagle Scouts. It had lasted no more than a few weeks.

But Albright, a wildlife technician at the Allegan State Game Area, has seen it before – in fact, far too many times. At 50,000 acres, Allegan is the largest state game area in Michigan. Vandalism is a regular occurrence.

“That sign is just the tip of the iceberg, Albright said. “We put up new signs all the time – literally thousands of signs. We have had the map boxes set on fire. And we maintain very few pit toilets now because they have been set on fire.”

Much of the vandalism is done by hunters, according to Albright, an ironic and disappointing development. The game area is funded by hunter license fees and federal dollars under the Pittman Robertson Act. Annual game area budget allocations are shrinking and hunters often want more or better services.

“Usually it is hunters (vandalizing the area),” Albright said, “and that makes it more frustrating. They’re usually young kids who do not see they are wasting their money. That’s something the older hunters get. But once in awhile it is an older hunter lashing out because they don’t like something. They are getting even.”

Getting even is costly. Albright estimated that vandalism repairs cost between $12,000 and $32,000 a year at Allegan.   When vandals are caught they get prosecuted, but conservation officers are spread thin. There are just too many places where no one is watching.

DNR officials say vandalism repairs do not get tallied on a statewide basis so no one knows the total cost for repairs.  Individual game area managers are left to account for it within their budgets each year.

“We’re spending 10 to 20 percent of our budget on this sort of thing, not including the personnel costs,” said Nik Kalejs, the biologist who manages Muskegon and Rogue River state game areas and three others in the region. “We no longer have seasonal employees. They used to take care of these problems. The complaints are out there, but we can’t address them as quickly now. We’ll pull more (full-time) staff in for these activities or try to find volunteers.”

Kalejs estimated seasonal staff spent 700 hours handling vandalism repairs each year. Those repairs might cost the game area $6,000 before personnel costs. Then there are added costs for trash collection and landfill disposal.

Trash dumping has become a larger problem in recent years. The piles can include discarded tires, meat processing wastes, home furnishings, drywall and other construction waste. More of it began appearing at the height of the nation’s foreclosure crisis. By the time the piles were found, the perpetrators were long gone, officials have said.

“We have fewer people to do the work and have to watch our money more closely,” Schaefer said. “We don’t get as much done when we have to deal with vandalism problems. 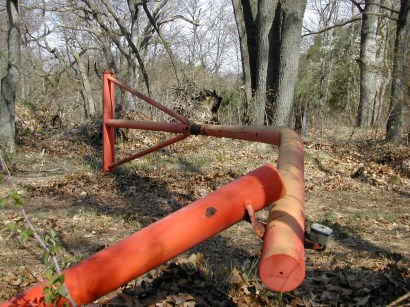 Schaefer’s biggest troublemakers are not hunters, though they and teens do damage signs. The bigger headaches come from off-road-vehicle enthusiasts who cut down trees or bash down gates.

“They come in and do erosion damage,” Schaefer said. “We put up posts to keep them out of areas and they pull them out. We put gates up and they pull those out along with the concrete posts.

“Things are very different from five to 10 years ago,” she said. “We don’t have the money any more. We used to do whatever needed to get done, but now we have to overlook things. Last year some contractor dumped two dump truck loads of shingles here,” Schaefer said. “And we had to spend our man hours picking it up and paying the dumping fees.”

Erosion and other problems caused by rogue ORV use gets expensive,” said John Niewoonder, the DNR field operations supervisor for six game areas in a region bordered by Big Rapids, Muskegon Belding and Rose Lake.

“We have (erosion) projects now at the Portland, Lowell, Saranac and Flat River game areas,” Niewoonder said. “We can’t keep them out. They are tearing the hell out of them just joy riding around. It happens annually.

“It’s sickening and these are hunters,” Niewoonder said, adding that clean-up and repair at six game areas in Ionia and Montcalm counties could cost $40,000 to $60,000 before salaries are included in the equation.

After more than 30 years in the outdoor writing business, you would think I'd know better.
View all posts by Howard Meyerson →
This entry was posted in Uncategorized and tagged DNR, DNR Budget, Hunting, ORVs, State Game Areas, Trash, Vandalism. Bookmark the permalink.