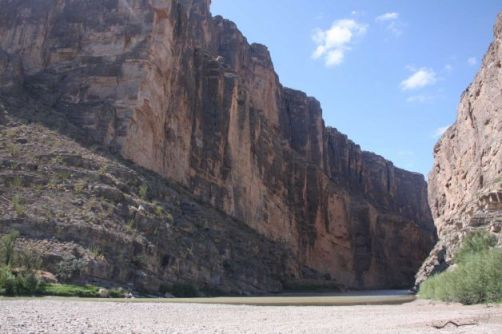 The cliffs of Santa Elena Canyon soar above the Rio Grande in Big Bend National Park, one of the national parks that could be affected by a proposed law making its way through Congress. Photo from mysanantonio.com

A bill now moving through the US Congress calls for giving the Department of Homeland Security control of all federal lands within a 100 miles of the Mexican and Canadian borders. The move is being derided by environmentalists and public land advocates who see it as a backdoor for gutting environmental protections. Supporters say it is essential for national security.

A story today on MySA out of San Antonio, TX details concerns along the southern border where Big Bend National Park is a major attraction. “Opponents, including the Interior Department, Customs and Border Protection and national environmental organizations, charge that the proposed legislation is an overreach,” the story said. “They say a 2006 memorandum of understanding between border security agencies and federal land mangers already establishes the framework for cooperation between them.”

The Coalition of National Parks Retirees is reported as saying bill would “gut a century’s worth of land protection” laws and open up “millions of pristine acres of national parks” to unregulated intrusion.”

“It’s a really, really unnecessary bill,” said Joan Anzelmo, a former superintendent of the Colorado National Monument and a board member of the organization. “It’s an incredible assault on our national parks.” Read more: Agency Control

After more than 30 years in the outdoor writing business, you would think I'd know better.
View all posts by Howard Meyerson →
This entry was posted in Uncategorized and tagged Big Bend National Park, Department of Homeland Security, National Parks. Bookmark the permalink.