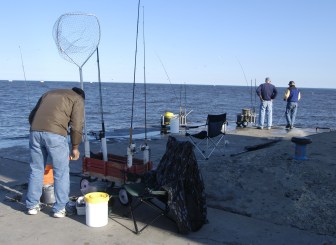 The ports of Grand Haven (shown), South Haven and St. Joseph are expected to be the top perch producers again this year.

GRAND RAPIDS — Anglers looking for a fresh perch dinner would do well to keep an eye on southern Lake Michigan and its piers. Unseasonably warm spring weather has prompted a few early runs. State officials say perch fishing is likely to start earlier than usual, beginning any time this month.

“Everything is ahead of schedule this year because of the warm weather,” said Brian Gunderman, a Michigan Department of Natural Resources fisheries biologist at the agency’s Plainwell office. “Perch fishing is three weeks ahead of schedule. At St. Joe, they have been into the piers.

“Typically, they start moving in to spawn in late May or early June. This year, it might be late April or early May. It could May for a big run, but we may have some fish in early April.”

“It’s still a popular fishery, even though it is reduced from what it was,” Gunderman said.

The lake’s perch population has been depressed since the late 1990s, so much so that the state cracked down on commercial fishing in 1996 and lowered angler creel limits. The daily limit for Lake Michigan is 50 perch, but south of the 45th parallel (excluding the Grand Traverse bays) it is 35 perch.

The perch decline was brought on by a number of factors, including over-harvesting and depressed reproduction. The drop in perch reproduction is linked to diminished plankton levels as a result of zebra mussels. Plankton is not evenly distributed across Lake Michigan, according to state officials.

That spottiness, combined with water temperatures and varying input from rivers, accounts for occasional spikes in the catch in places such as Green Bay, Wis.

“We were hoping for 1 million fish (caught) a couple of years ago,” said Dave Clapp, chief for the DNR’s Charlevoix Fisheries Station, “but we have been bouncing around one-half million.

“Anglers will start seeing those fish this year, but they will be very small,” Clapp said. “We’re expecting a moderate harvest and we may see good reproduction, depending how much it warms up.”

The ports of St. Joseph, South Haven and Grand Haven, he said, are expected to be the top perch ports again this season.

This entry was posted in Uncategorized and tagged Fishing, Lake Michigan, Perch. Bookmark the permalink.