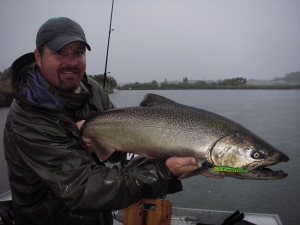 State officials warn that without stocking cuts, fewer or smaller Chinook salmon may be the result in Lake Michigan and its tributaries like the Manistee River where this was caught.

Michigan’s Department of Natural Resources and Lake Michigan managers have invited anglers to have a say in the outcome.  Four management options were presented to anglers in a workshop held April 14 in Benton Harbor. The choices were the consensus of a multi-state working group that spent a year reviewing Lake Michigan’s forage base and running stocking scenarios on a sophisticated computer model.

Whittled down from a field of 25 choices, all four call for cutting stocking efforts by 30 to 50 percent and further decisions about lake trout, steelhead, brown trout and Coho salmon. Officials say they wanted options that would not decimate the forage base or result in smaller or fewer fish.

Lake Michigan is stocked with 2.5 million Chinook salmon fingerlings annually. They feed exclusively on alewives unlike steelhead, coho salmon and brown trout which feed on various prey. If the alewives disappear so do the big kings.

“We started the process a year ago. It does come with some anxiety,” said Denny Grinold, a Lake Michigan fishing charter captain at Grand Haven who represented the Michigan Charter Boat Association on the multi-state work group. Grinold also chairs the committee of advisors for the Great Lakes Fishery Commission.

“We just came off a really good year in Lake Michigan,” Grinold said. “But if you go back to 2003 on Lake Huron, they had the largest prey population in the history of that assessment and in 2004 Lake Huron collapsed.”

Lake Michigan forage is at an all time low, according to state and federal fish managers who conducted surveys on the lake. It is home to a robust 2010 alewife year-class and five other age-classes that contribute little to the forage base. No new forage showed up in 2011. State officials are hoping to see a new year-class develop in 2012.

“The biomass in Lake Michigan is at record lows right now despite the strong 2010 year class that resulted in bigger fish last year.” said Jay Wesley the Lake Michigan basin coordinator for the Michigan Department of Natural Resources. “We are being very cautious about how we proceed. The 2010 year class is getting eaten up very quickly,” he said.

“Throughout the 1970s to 90’s we always had nine year classes of alewives. We had young fish and very old fish. Now, we’re down to six age classes and 95 percent are from 2010.

“We are getting to the point that we are loosing the older, bigger spawning fish. Lake Huron was down to four age classes when it crashed,” Wesley said.

Lake Michigan is at a tipping point. Too little food in the lake means smaller and fewer fish caught, or worse. Quagga mussels are filtering out the tiny nutrients that young, larval prey fish need to thrive. The percentage of naturally reproduced Chinook salmon has grown steadily and now tops 50 percent and can run much higher. Those naturally reproducing fish put additional pressure on the forage.

“What we are hearing from stakeholders is that they do not want the alewife population to collapse,” Wesley said. “We took the most severe stocking cuts off the table and then found a 20 percent Chinook cut scenario doesn’t do much because of the natural reproduction.

“We know from markings that natural reproduction can be 50 percent with Age 1 fish, but when we look at two, three and four year old fish the percentage goes as high as 80 percent, though we aren’t as confident about the mark with the older fish.”

Bottom line, Wesley said: “Natural reproduction is good and we may be over-relying on hatchery fish.”

Computer simulations of current stocking practices show a 23 percent chance of a low alewife population for Lake Michigan; a 35 percent chance of reduced weight in mature Chinook salmon; and a 20 percent chance of catch rates that are less than 8 fish per 100 hours. Experts say those figures suggest a relatively high risk of fishery collapse.

That point doesn’t escape, Dennis Eade, executive director of the Michigan Steelhead and Salmon Fisherman’s Association, another working group member from Michigan. Eade said any stocking scenario with even a 20 percent risk of collapse was “too high.”

“We can’t deny the lake is going through a dramatic ecological change,” Eade said. “At the same time we see the composition of the food web is changing dramatically and that natural recruitment is well over 50 percent.

“I don’t believe the there is a pending collapse in the next 12 months, but it could happen in the next five years if we don’t approach stocking scientifically.”

This is the message Michigan fish managers want anglers to consider. The working group examined the outcomes of various stocking and forage scenarios. Most agreed that any with more than a 20 percent risk of collapse was unacceptable. Most preferred lower-risk scenarios – which translates to greater stocking cuts.

“I would rather not cut other species,” Robertson said, “in the interest of keeping diversity in the lake. If the primary problem is Chinook then cut Chinook and maintain the others.

“In the 80s when Bacterial Kidney Disease showed up on Lake Michigan, what saved was that the steelhead was good, the Coho came on and there were lake trout. Those fish all filled the gap.

The four choices that were presented to Michigan anglers in Benton Harbor are:

“All four of these have been agreed upon by all the states,” Wesley said. “They are doing the same thing, taking these ideas back to their constituencies.”

A decision is expected this summer. Public comments can be submitted online through May 15 at www.miseagrant.umich.edu

After more than 30 years in the outdoor writing business, you would think I'd know better.
View all posts by Howard Meyerson →
This entry was posted in Uncategorized and tagged Chinook, Chinook Salmon, DNR, Fishing, Great Lakes Fishery Commission, Michigan Department of Natural Resources, Salmon. Bookmark the permalink.

1 Response to Lake Michigan salmon stocking could be slashed