Nongame Wildlife: State effort to be revised and focused 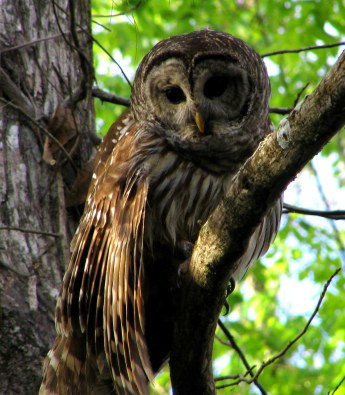 Barred owls are among the birds, animals and insects that benefit from nongame management. Photo: Wikimedia Commons

One of Michigan’s more important wildlife initiatives, Michigan’s Nongame Wildlife Program, celebrated its 30th anniversary in 2013. It was a quiet celebration by all accounts, a contrast to its early years when the Michigan Department of Natural Resources (DNR) would have trumpeted its successes: reintroduction of peregrine falcons, creation of a statewide wildlife viewing guide, and construction of nesting platforms for ospreys, to name a few.

State wildlife officials contend that nongame work continues for a variety of species. The work is more diffuse and expensive than in the past. Some is focused habitat work for species such as the Kirtland’s Warbler. Some is broader grassland work for pheasant restoration, which helps both game and nongame species. Wildlife management, they say, is now accomplished using an eco-system approach, which benefits all species.

Critics, however, worry about the nongame program’s seemingly diminished capacity, the absence of dedicated staffing, a lack of research, and reduced visibility. “I get the sense that the DNR is challenged when talking about nongame species. They don’t have the support that game species do,” said Brad Garmon, director of conservation and emerging issues for Michigan Environmental Council. “We want it to be an agency that appeals to birders and non-motorized users too. From our perspective those are things to celebrate, things that will attract people who come to do the Pure Michigan thing.”

FIELD WORK GOES ON BUT GETS LITTLE PROMOTION

Amy Derosier, the DNR’s wildlife action plan coordinator, acknowledges that things have changed in the 30 years since the state’s Nongame Fish and Wildlife Trust Fund (NFWTF) was created to fund the program. Little is done to promote it. Research grants were discontinued. Most work today is done on a part-time basis by field staff.

That may change in future years, she said. An internal DNR nongame work group is examining ways to make the program more effective. The agency’s Wildlife Action Plan, a blueprint for work done every year, is being revised to put a finer point on nongame wildlife management goals and outcomes, among other things.

nongame,” Derosier said. “It’s important for them to know what we are doing. As we go forward with developing measurable objectives we will be able to talk more about the successes.”

The Wildlife Action Plan covers more than 400 species “of greatest conservation need.” All but a handful are nongame species. Having a plan makes Michigan eligible to receive federal wildlife grants from the U.S. Fish and Wildlife Service (USFWS); the funding comes from offshore oil and gas drilling and is returned to states that put up a 35 percent match.

Michigan’s match for federal money comes from the NFWTF, which includes revenues from private donations, accrued interest, and the sale of wildlife habitat license plates, with its iconic loon emblem. That money once provided the sole funding for Michigan’s nongame program, which operated on approximately $600,000 annually before the federal wildlife grant program began in 2001.

Since then, Michigan has received a total of $20.1 million in federal/state wildlife grants for nongame work, as much as $2.2 million in a year. But those figures have declined, according to state officials. Michigan received only $1.3 million in 2012 from the USFWS. Some went to fisheries and state parks for habitat improvement. The DNR wildlife division received $817,947 for nongame work, along with roughly $60,000 in federal endangered species money. 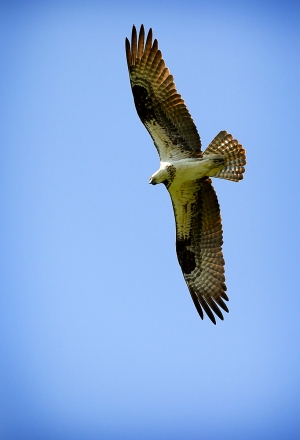 Osprey nesting platforms have been constructed with nongame funding.

Public support for the nongame program, however, may be dwindling, according to state officials. Trust fund donations and license plate sales have declined in recent years while fund interest rates bounced up and down with the marketplace. Those three sources of money amounted to $712,500 for nongame work in 2012, according to Ann LeClaire-Mitchell, the DNR’s wildlife division program support section supervisor.

But only $596,300 of it was spent that year along with $1.3 million in federal money. Some of the trust fund appropriation was held back to buffer the effects of expected cuts the following year. USFWS grant funds have shrunk by five percent a year for the last decade, according to Derosier.

“Every time there is a budget hiccup in DC there is a hiccup for funding at the state level,” Derosier said. “It’s not dedicated funding like Pittman-Robertson (which funds game species work). We’re on the chopping block every year. “Although we have a bigger program than in the past, we are doing more habitat recovery work, for species like the Kirtland’s Warbler and Karner Blue Butterflies, which is more expensive.”

Money for habitat restoration—the mowing, burning and planting needed—doesn’t go as far and may not be as eye-catching as reintroducing a colorful species. But it is no less essential, according to wildlife managers. The Mitchell’s Satyr butterfly, Massasauga Rattlesnake, and grassland birds such as Bobolinks and Henslow’s Sparrows all benefit from the work being done.

“We get a lot of work done for a small budget,” Derosier said. “Two million sounds like a lot, but it costs a lot of money to recover a species and it takes a lot of time.”

A 2011 national survey by the USFWS found 71.8 million people engage in wildlife watching: birdwatching or feeding at home, traveling to see or photograph wildlife, or managing land to see it. By contrast, 33 million fished and 13.7 million hunted. Wildlife watchers spent $54.9 billion pursing that recreation annually, compared to $41.8 billion spent by anglers and $33.7 billion spent by hunters. Approximately 48 percent of 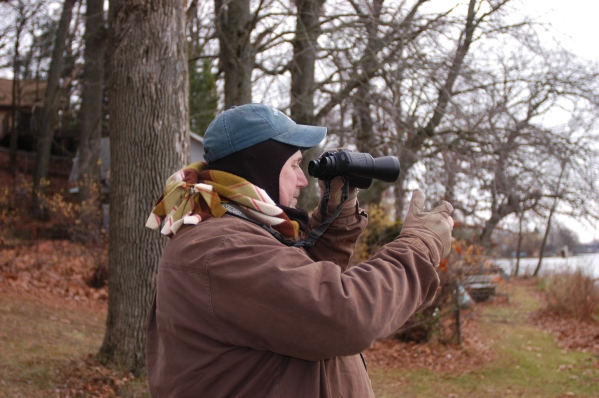 Michigan’s resident population falls into one category or another. The study, called the National Survey of Fishing, Hunting and Wildlife Related Recreation, found 39 percent of Michigan residents watched wildlife whereas 21 percent were classified as sportspersons, meaning they hunt and/or fish.

Yet Michigan DNR officials report that nongame work makes up only five percent of the agency’s wildlife management budget each year. “It is small by comparison to Pittman-Robertson, which is in the neighborhood of $12 million to $13 million,” said Doug Reeves, the assistant wildlife chief for the DNR. “The hope was that they would provide similar funding for nongame species as game species, but there is little support for that.

“From a wildlife perspective the need has not diminished. There are species in need of conservation and we have the responsibility to manage for those things. Whether the demand by the public has diminished is a different question. What we need ahead is continued support—financially, and maybe vocally. The squeaky wheel does tend to get the grease.”

This story appears in the  Jack Pine Warbler, the magazine of   Michigan Audubon