Posted on December 6, 2015 by Howard Meyerson 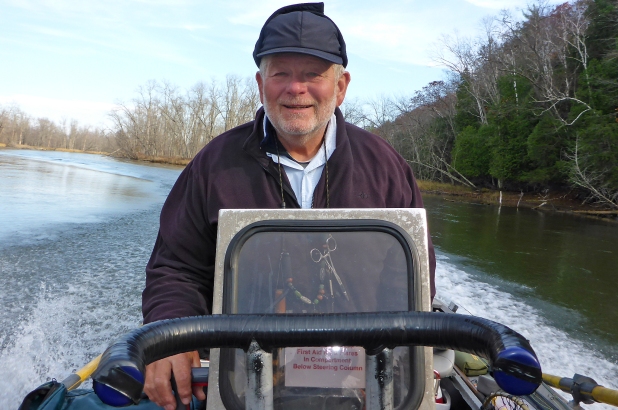 Captain Chuck Scribner is in his element on the Manistee and Au Sable rivers. Photo by Howard Meyerson.

MANISTEE, MI -Wayne Andersen was attempting to lead a hooked steelhead when Captain Chuck Scribner offered him some gentle pointers. Andersen had cast to a visible current on the Manistee River and the fish quickly hit his salmon‑colored bead.

“Let him swing. Don’t try to pull him out (of the current). If you try, you will bust him off,” Scribner advised in his relaxed, encouraging style. “Let the current do its job … We’ll get him.”

Two minutes later, both men were smiling as Scribner netted the 7‑pound steelhead and brought him aboard for a few photos before releasing it.

“That’s a beautiful fresh fish,” Andersen, of Ludington, said. He’d spent the day refining his casting technique, a common thread with Scribner’s clients both novice and advanced. Some guides focus on finding fish, but teaching is an inherent part of Scribner’s style — a special quality that brings clients back year after year.

“I’ve fished with Chuck about five years. I wanted to learn more about steelhead fishing,” Andersen explained. “No matter where you fish with him, it is always a pleasant learning experience.” 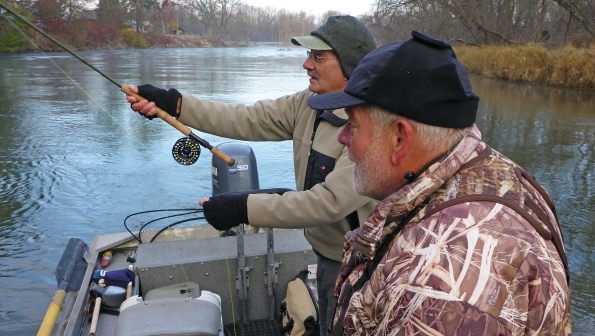 Scribner, a 27‑year veteran fly fishing guide and owner of Scribner Outfitters in Manistee, grew up in Birmingham, a suburb of Detroit. He guides on the Big Manistee and Au Sable rivers 220 days a year, sometimes for trophy trout or to fish dry flies in springtime, turning to steelhead and salmon come fall.

“I love teaching people how to fish, not just cast,” Scribner explained. “That’s what I worry about in the middle of the night. I want them to be successful and leave with skills they didn’t have when they arrived.

“For some reason, my clients come back year after year. I’ve fished with the kids of some who got married and had kids. It’s pretty fun to grow with these people and fish with their children and their children’s children.”

Tom McColley is one of those clients. The South Lyon angler learned to fly fish from Scribner and his wife, Linda, who formerly was more active in the business. McColley met them at a sport show nearly 20 years ago and learned to fly fish. He then introduced them to his son, Keegan, who wanted to learn.

The Scribners took them to a stream to teach Keegan about aquatic insects. McColley learned lessons, too. Then came casting lessons before going out on the river where they caught “a ton of fish.”

“We went from that to (Keegan) being 19 and a college student fishing salmon in the fall and Chuck laughing about how he had to hold him by his belt (as a boy) while fishing salmon. Those two have a very special relationship, and my son would never dream of missing a trip with Chuck. He still joins us in the fall.”

Scribner learned to fish as a young boy. He was taught by his father. The two enjoyed perch fishing on Lake Huron, and Scribner recalls an early charter, where as an 8 year‑old boy, he figured out how tie the perch rig quickly. He made $13 that day charging other customers fifty‑cents per tie.

“I decided then that I wanted to be like the (charter) captain and take people fishing,” Scribner said.

Wayne Andersen holds up a steelhead he caught under the watchful eye of Chuck Scribner. Photo by Howard Meyerson.

It would be years, however, before it happened. Scribner got drafted and saw active military duty in Vietnam during the 1960s. He returned home to the family restaurant‑supply business and enjoyed fishing on weekends. In time, he developed a Great Lakes charter fishing business that kept him busy, but gave that up to become full‑time fly fishing guide on Michigan rivers.

“Chuck is a shining star of integrity and pleasantry in an industry where not everyone is that way,” comments Mark Tonello, a fisheries biologist with the Michigan DNR. “A lot of guys are out to make money, and they take things for granted. Chuck understands how fortunate he is to be able to make a living from the state’s phenomenal natural resources.”

Bob Danielson, of Brighton, now 88 years old, has enjoyed fishing with Scribner for two decades. His son‑in‑law and grandson often have joined them on the river. Scribner, he said, has a good sense of humor. He is also generous with his knowledge, willing always to pass it on to clients and
other anglers who may not be successful catching fish.

Five years ago, while he and Scribner were fishing fall salmon on the Manistee, they passed by an angler onshore who was having no success, Danielson said. The angler complimented Scribner’s boat. Scribner, in turn, suggested he fish just a few feet over where he could see fish lay.

Later that day, while returning to the dock, they passed the angler again and exchanged progress reports. Scribner reported having two king salmon, fish that were tied up alongside being revived before being released. The shore‑angler admitted to having nothing.

“Chuck gave him those two king salmon, and that man couldn’t have been more appreciative. That is typical of Chuck,” Danielson said. “He is just a class person.”

Connect: To reach Captain Chuck Scribner call 231-357-8419 or write to him at scribneroutfitters@gmail.com

After more than 30 years in the outdoor writing business, you would think I'd know better.
View all posts by Howard Meyerson →
This entry was posted in Uncategorized and tagged Fishing, Fishing Guides, Fly Fishing, Manistee River, Rivers, Steelhead. Bookmark the permalink.