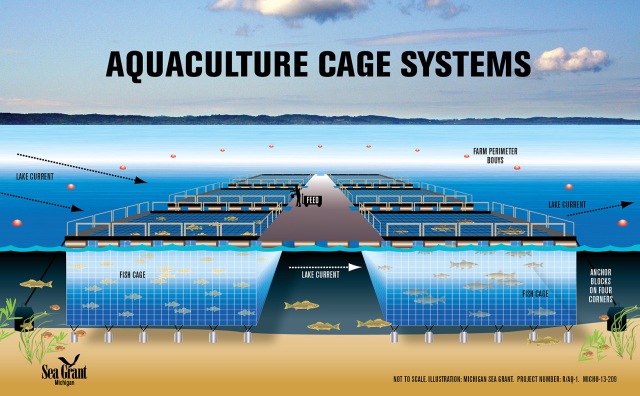 Grand Rapids, MI – Whether commercial fish farms will be allowed operate on Michigan’s Great Lakes waters is a question far from being answered, but state officials say it is being considered. A Blue-Ribbon scientific advisory panel was established in early June to study the questions involved.

Two private companies approached the state of Michigan in 2014 with proposals to grow millions of pounds of rainbow trout in floating pens. Neither has submitted an application for a permit, but state officials say the inquiries kick-started the scientific review of potential downsides and issues. A final report with recommendations is expected in October 2015.

“The science panel is looking strictly at cage-culture, not the overall aquaculture industry” said Ed Eisch, the Michigan Department of Natural Resources Fish Production Manager and agency representative to the state’s Quality of Life Aquaculture Work Group which includes the Michigan Departments of Environmental Quality and Agriculture & Rural Development.

Cage culture, he explained, involves raising fish for market in large, floating net pens in open waters – a practice not currently used in Michigan, though it is allowed by Ontario in the North Channel and Georgian Bay waters of Lake Huron. Other fish farming methods either use self-contained systems where nothing leaves a facility, or flow-through systems like those at state hatcheries.

“A well-run and designed flow-through system is of relatively low concern to me,” said Eisch, who oversees Michigan’s hatcheries. “That’s what our facilities are. But the cages have more questions marks, for sure, because everything is happening right in the Great Lakes.” 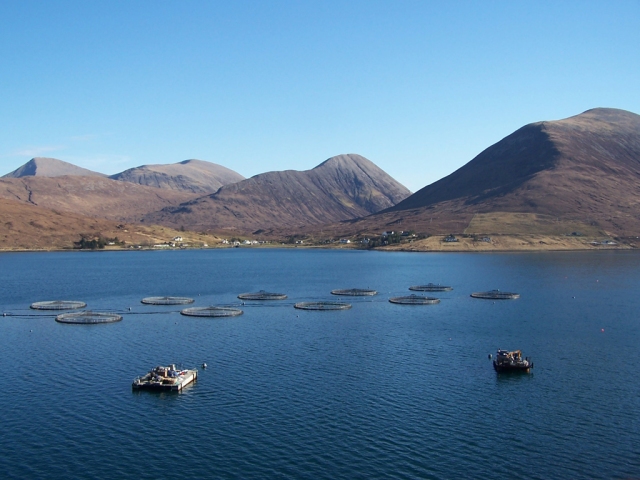 An example of offshore salmon farming in the sea (mariculture) at Loch Ainort, Isle of Skye. Photo: Wikipedia.

The issues of scientific concern include matters of:

“Fish health is a concern to me, but generally speaking there are not a lot of fish health issues,” Eisch said. “It’s in the interest of fish farmers to keep their fish healthy. That equates to the bottom line. Escapement is much less of an issue if they are using triploid (non-reproducing) stock… but I don’t know if that is a common practice.

“Nutrient loading is a big question mark for me. It gives me pause to think about all that waste going directly into the Great Lakes. With flow-through (approaches) we have waste removal systems. We have made efforts to get other industries to reduce phosphorus loading to the Great Lakes, and this is a big enough amount to be of concern.”

The science panel, which held a public meeting June 25 to gather information about other issues to be considered, was formed in the wake of the two private cage-culture proposals in 2014.

Coldwater Fisheries, of Coldwater Ontario, seeks to invest $1.2 million in a Little Bay de Noc and Big Bay de Noc cage-culture operation. Eisch said the company is proposing a five-year pilot operation growing 350,000 to 500,000 pounds annually which would grow to a million pounds per year if successful. The second company, Aquaculture Research Corporation, of Tecumseh, MI, is considering an operation on Lake Huron in the Alpena, Stoneport, Rockport State Park region which would produce at least 500,000 pounds of rainbow trout each year.

Tammy Newcomb, senior water quality advisor for the Michigan DNR said neither company has asked for a permit to operate. Coldwater Fisheries is waiting for the results of the science panel.

“There are no permit requests right now. People view this as moving forward, but we are not moving forward (with any project),” Newcomb assures. “We are considering issues that were brought to us and how (future) decisions need to be made.”

The scientific panel of experts includes:

“Even people in the aquaculture industry realize we are quite a ways from a decision,” said Jim Diana, a panel member and Michigan Sea Grant director.

Michigan Sea Grant produced a strategic aquaculture plan for Michigan in 2014, entitled “A Strategic Plan for a Thriving & Sustainable Michigan Aquaculture,”  that suggests Michigan’s aquaculture industry could grow from a $5 million a year industry today to $1 billion, or more, by 2025.

1 Response to Officials examine fish farming in the Great Lakes