More and more Michigan communities are working out how to be more bird-friendly.

Royce Ragland is proud that her village of Elk Rapids —population 1,642—is working to improve conditions for birds. The Antrim County community has the unique distinction of being the “first community in the world” to be certified by Saving Birds Thru Habitat (SBTH), the Omena-based nonprofit that promotes saving bird habitat. Elk Rapids is part of a growing movement in the U.S. to make communities friendlier for birds.

“We decided it was important to raise people’s appreciation of birds,” explains Ragland, vice-chair for the village planning commission and founder of Green Elk Rapids, a volunteer group working to raise awareness about environmental issues. “Birds are an indicator of environmental health. We are right in the middle of amazing natural attributes—beaches, woods, ponds, and streams. We’re encouraging people who live here to treasure and preserve them.”

Two Elk Rapids parks were certified in September 2014. Each is filled with native oak, cherry, and willow trees, all known to host an abundance of lepidoptera, the butterfly and moth caterpillars which neo-tropical migrant and/or resident birds often eat. Their presence, along with other native plants, made each of the parks a high-quality bird habitat, according to Kay Charter, executive director of SBTH. The organization has certified industrial and private land sites, but not municipal properties, until now.

“Our bird population is declining and the number-one reason for that is habitat loss, specifically the loss of native plants,” Charter declares. “Non-native plants don’t support the insect abundance that birds need.

“Elk Rapids took the initiative to become certified. They have native trees and bushes and committed to replace those that are not native. Some residents have (since) called and want to work with us to have their properties certified. It’s the ripple—like throwing a stone in a pond.”

Robert Petty hopes to create just such a ripple as National Audubon’s Bird-Friendly Communities coordinator. The Montana resident was hired a year ago to develop a national initiative expected to launch in 2015. 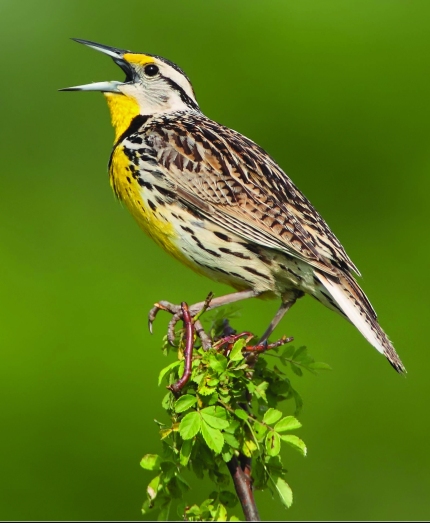 “Communities have an opportunity and obligation to make their places healthy and sustainable for birds as well as people,” Petty said. “That ultimately boils down to assuring the community has certain things: conservation quality and people engagement.

“A lot of the activities embodied in the program are as old as the 450 chapters we have; all are involved one way or another in some bird-friendly activity. Our goal is to have all communities become bird-friendly.”

Alabama’s Birmingham Audubon Society is one example, according to Petty. Its membership works with the city parks department on native plant restoration. Audubon Society of Portland (OR) members certify backyards and work to keep cats away from important bird areas. Audubon Connecticut has a school yard habitat program.

Major cities, he adds, are also working to become more bird-friendly. Chicago, Toronto, Columbus, OH, and Minneapolis and St Paul are a few examples. Some have developed bird-friendly building and planning guidelines. All have voluntary lights-out programs through which Audubon chapters may collaborate with building owners and managers in an effort to reduce the number of birds that die from collisions with buildings.

Between 100 million and 1 billion birds die in the U.S. alone from these collisions, according to research by Daniel Klem Jr., Sarkis Acopian professor of ornithology and conservation biology at Muhlenberg College in Allentown, PA. He reports that 225 species of birds in the U.S. and Canada have been documented in these collisions. Those findings and others can be found online at his Birds and Windows page at http://bit.ly/17E7XDd. Scientists studying the problem know birds migrate at night, navigating by the moon and stars. On rainy and foggy nights they fly at lower altitudes. Bright city lights and window reflections can cause birds to become disoriented and crash into buildings.

Detroit is working to protect migrating birds by promoting lights-out programs to business owners and businesses.

Rob Duchene and other Detroit Audubon members are working to improve those conditions in Detroit. The 65-year-old retired school teacher said 15 to 20 government or corporate entities now participate in its Safe Passage program. They are asked to turn building lights off from the fifth story up, from 11 p.m. to 5 p.m. during spring and fall migrations.

“We maintain an honor roll of confirmed participation,” Duchene said. “Wayne County has agreed to participate. The State of Michigan is participating. The Renaissance Center participates, and General Motors is very active.

“Our next phase is to get to local meteorologists to help us by using radar to scan the skies and see clouds of birds coming in. Most people don’t know birds migrate at night. The hazard is accentuated on rainy nights. Those might be times when they might advise those in hotels to close the shades,” said Duchene.

The city of Escanaba, in Michigan’s Upper Peninsula, is also engaged in bird-friendly work, according to Joe Kaplan, principal of Common Coast Research and Conservation in Hancock. His firm received a $50,900 from the National Fish and Wildlife Foundation in 2012 for the Escanaba Migratory Bird Enhancement Initiative. The project seeks to restore native plants to much of the nearby shoreline, enhancing the habitat for migrating birds.

Selling the idea to community leaders took time, according to Kaplan, but the project has become popular. Working with area volunteers and additional donations from the city, DTE Energy, Wildlife Unlimited of Delta County, and others, the group has installed nest boxes and restored critical stopover habitat for migrating birds, along with eliminating phragmites on a 1.4- mile stretch of Lake Michigan shoreline.

Elk Rapids is now working to update its wetland ordinances, according to Ragland. Community leaders are now recognizing their importance as bird habitat. A special village council meeting to further the idea of building a bird-friendly community is planned for 7 p.m. on May 18 at the village Township Hall at which Doug Tallamy, chair of the Department of Entomology and Wildlife Ecology at the University of Delaware will present “Saving the Environment, One Backyard at a Time.” Tallamy is the author of Bringing Nature Home: How Native Plants Sustain Wildlife in Our Gardens (Timber Press, 2007).

All of this work “has brought more awareness to the discussions,” Ragland said. “It’s giving the average commission member or voter one more piece of information to help make good decisions. We focus on a lot of issues like energy and recycling. When we realized the connection between the environment and bird life, it was like lightbulb going on. Now a number of us plan to have our backyards certified.”

Appears in the Spring Issue of the Jack Pine Warbler, the magazine of Michigan Audubon.