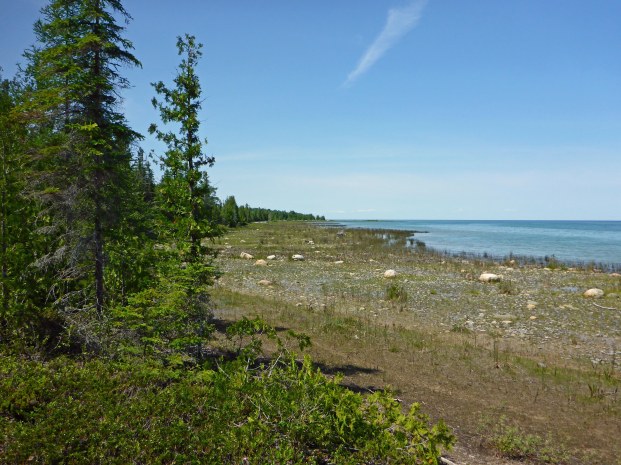 ROGERS CITY – It was mid-afternoon when I kicked off my boots and sat down on a bench at the edge of a cobblestone beach along Lake Huron. A short rest was in order before finishing the hike. Waves lapped gently on the rocky shoreline and the seagull cries carried inland on the freshening breeze.

I hadn’t seen a soul on the trail. Nearly two and a half hours had elapsed since I parked my car in the empty lot and set out on a five-mile exploratory hike at Thompson’s Harbor State Park, one of Michigan’s newer, but undeveloped parks, a 5,300 acre mecca for nature lovers.

Daisies, Queen Ann’s lace, black-eyed Susan’s and wood lilies were among the wildflowers in bloom. Birds were flitting from tree to tree. I had walked out to a beach and then followed the trail network inland, through cedar and conifer forests, along a cobblestone shoreline, into wild-feeling woods and out to the shoreline again.

Many know about Michigan’s wilder state parks like Porcupine Mountains and Tahquamenon Falls in the Upper Peninsula, or Wilderness State Park just west of Mackinac City. Far fewer know of Thompson’s Harbor, Negwegon or Rockport state parks along Michigan’s northeast Lake Huron shoreline, an area where the Michigan DNR is working with a variety of partners to create a different state park experience.

Established in 2012 just north of Alpena, Rockport is Michigan’s newest state park. It is undeveloped now, but of the three, it will eventually have more typical state park amenities. The other two, Thompson’s Harbor, and Negwegon (3,738 acres), which is north of Harrisville, are each to be left largely wild. Both showcase the region’s finest natural features.

Each offers miles of undeveloped shoreline where people can hike and swim or paddle,

Hikers can take the trail to the shoreline and sit a spell and listen to the waves and seagulls. Photo: Howard Meyerson

thick woods and several miles of hiking and skiing trail. Backcountry camping is permitted at Negwegon – a place I have visited several times. Not so, for now, at Thompson’s Harbor, though the park has two cabins for rent.

“Thompson’s Harbor is pretty much a wild park,” said Blake Gingrich, the park’s supervisor based at PH Hoeft State Park, north of Rogers City. “It’s a birding mecca and a nature lover’s park. It is open to hunting. There are rare dunes there and rare plants like Pitcher’s Thistle and Dwarf Lake Iris”

In fact, the park has one of the largest known populations of the federally listed and threatened iris. It also contains a 301-acre designated natural area named after E. Genevieve Gillette, the noted Michigan conservationist whose $260,000 gift made purchase of the first 1,000 acres possible.

“It’s a pretty new park. We’ve only had it 26 years,” Gingrich said. “We estimate we get about 2,700 visitors a year, but that is changing now that we are promoting the park.
“People come in from all over the state to rent the cabins. There is no one around for miles and you can walk in the fall or hunt with the kids. It’s a park to hike and explore. And there is no better place to view a dark, black (starry) sky at night.”

On this sunny day, I had the park largely to myself. There was a family picking flowers at the entrance off U.S. Route 23 where a simple sign announces the park’s presence. The

A simple sign on the highway alerts people to its presence. Photo; Howard Meyerson

entrance road can be rough and a park sign quickly warns visitors of that, but I didn’t find it particularly tough, though it could pass for a bush road in some far distant place – something I found attractive.

Kiosks at the trailhead parking lot explain the park’s history, its benefactors and important species. The Nature Conservancy, for example, played an important role in its acquisition, as did the Michigan’s Natural Resources Trust Fund which eventually paid for much of the land.

A trip down the trails – whether short or long –inevitably brings hikers to the park’s isolated shoreline where the quiet of the landscape is powerful. My four-hour walk on the marked and mapped trail system was rich in natural scenery.

So much so that upon returning to parking lot five-miles later, I made a note to return and explore more of the park – and ranked it right up with Negwegon as one of the state’s great places to hike and visit.