Posted on January 9, 2014 by Howard Meyerson 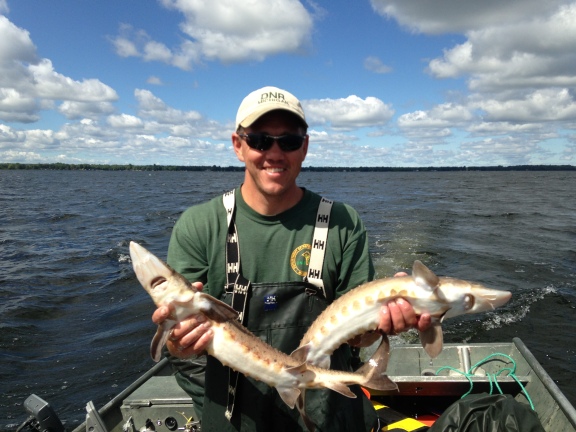 ONAWAY, MI – Preliminary findings from a sturgeon mark-and-recapture study in August on Black Lake show that most are stocked and raised in a hatchery, a small number are wild, and a large percentage are juveniles. The netting study was done to evaluate sturgeon stocking practices and the extent of lake’s wild population, state officials said.

“What surprised me was to find so many juveniles,” said Dave Borgeson, the Northern Lake Huron Unit supervisor for the Michigan Department of Natural Resources. “We weren’t entirely sure how well we could implement the survey. To be able to catch so many young sturgeon– it came off as well as could be anticipated. “

The three-week netting effort was conducted by DNR crews with help from Michigan State University and the Little Traverse Bay Band of Ottawa Indians. The researchers collected 283 sturgeons. Most of those were juveniles.

The smallest was 22-inches. The largest was 71-inches long.

Ed Baker, the station manager for the DNR’s Marquette Fisheries Research Station, estimates that Black Lake contains 6,114 juvenile sturgeons from the 2009 year class or older. His estimate is statistically derived from the capture of 252 juvenile sturgeon that were less than 133 centimeters (52.3 inches) long.  Smaller fish were not “susceptible” to gill-nets that were used, Baker said.

“Ongoing analysis suggests that the vast majority of juvenile lake sturgeons in Black Lake are of stocked origin,” Baker wrote in a preliminary report. “…natural recruitment is very low in Black Lake and likely not sufficient to support the population under the current management (harvest) regime.”

Baker estimated that there are 28 wild sturgeons from the 2008 year class, and 150 others from 2004, both years when the lake was not stocked.

“I was pleasantly surprised with the abundance of juvenile sturgeon,” Baker said. “Based on our stocking numbers, survival was higher than anticipated.”

A Black Lake sturgeon being measured on a measuring board. Photo: Courtesy MDNR

larger size in the hatchery.  Only 249 sturgeons from the 2005 year class are estimated to be in Black Lake. That was a year researchers experimented with size by planting 7,533 sturgeons that were 3.3 inches long. In 2006 they planted 4,188 more that were nearly twice as large (6.3 inches).  Baker estimates that 1,712 of those fish are still in the lake, based on the August catch.

“In 2005 and 2006 we were doing research to see how size affected the outcome,” Baker said. “Based on our finding it doesn’t do us any good to stock three inch fish. We will be looking at size (in the future).

Some years there are fewer stocked. The DNR estimates the lake has 925 mature adults. The long-term goal, according to Borgeson, is to restore the population to a minimum of 2,000 mature adults.

Sturgeons do spawn successfully in the Black River. It’s what happens after that that isn’t known.

SOMETHING HAPPENS AFTER THEY SPAWN

“We have ample spawning habitat below Kleber Dam on the Upper Black River,” Baker said. “Some years we have seen 10,000 to 15,000 sturgeon larvae. Something happens to them after that. It could be a lack of suitable habitat for larvae to hide in from predators or a lack of food. So we are expanding our research in the river to focus on the young-of-the-year life stages to get some answers.”

Borgeson said the survey data will help “inform” future stocking decisions as well as agency and other decision makers.  The results indicate that current stocking practices are successful and that stocking size will require further attention. Hatchery sturgeon planted in 2012 and 2013 were 4.6 inches and 4.2 inches respectively. They were too small in August to be caught in the gill nets, so no survival data is available for the past two years.

The general practice is to hold them in the streamside hatchery as long as possible, according to Baker, but sometimes budgets become a constraint, or hatchery staffing is limited by students having to return to school. What is known is that once the young hatchlings reach 4-inches and begin to feed on blood worms, they will grow a half-inch every week.

“A couple more weeks at the end of summer can make a huge difference in the size of our stocking,” Baker said.

After more than 30 years in the outdoor writing business, you would think I'd know better.
View all posts by Howard Meyerson →
This entry was posted in Uncategorized and tagged Black Lake, Conservation, DNR, Environment, Fish, Fishing, Michigan Department of Natural Resources, Nature, Sturgeon. Bookmark the permalink.