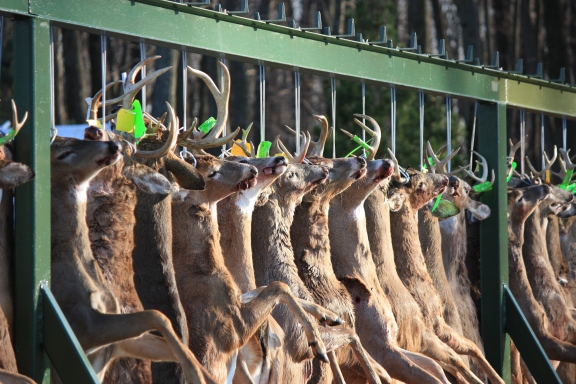 Michigan’s two-week firearm deer season proved a good one for hunters, despite the EHD outbreak that killed thousands of deer in southern Michigan. More hunters participated and many did well.

“Our license sales were about 2 percent higher than 2011,” said Brent Rudolph, the Michigan Department of Natural Resources deer program specialist. “As of Nov. 18, that number was 671,000.”

Rudolph had forecast fewer hunters than last year based on a steady downward trend in recent years. More and more hunters have shifted their attentions to the archery and muzzleloading deer seasons.

But firearm deer hunting is a powerful tradition in Michigan, and this year’s Thursday opener presented hunters with some time to travel north.

“We sell more licenses when the season opens on Saturday, but we get the greatest northern activity when it opens on a Wednesday or Thursday,” Rudolph said. “People take a couple of days and go up to camp and hunt.”

That’s what northern DNR field staff members reported: more hunters and camps were set up on public lands and more hunters arrived early in the week.

Upper Peninsula wildlife staffers had reported prior to the opener that buck numbers were up and that fawn production was good last spring and summer. That meant more deer for the taking.

Some hunters headed north because they feared finding fewer deer in the southern part of the state due to EHD, Rudolph said. But hunting generally was good in southern Michigan, a region hit hard by the midge-borne disease that affected 30 counties.

Hunters largely have been happy.

“We had a fair number of southern Michigan folks say they expected to see lots fewer deer. The (deer) numbers were down, but it was not as bad as we thought,” Rudolph said.

That’s what Bret Griffis expected, too. He owns the Jerome Country Market in Hillsdale County, a business well-known for its buck pole, jerky products, deer processing and livestock butchering services. The market’s huge buck pole is a draw throughout the season. The business attracts hunters from Detroit, Toledo and Battle Creek.

“We had more bucks on the pole this year. It seems to keep edging up,” Griffis said. “We

were thinking deer numbers wouldn’t be there because of EHD, but we took in 318 deer the first day and 380 deer the second day.

Griffis expects his staff will process 4,000 deer during the combined Michigan deer seasons. Muzzleloading season opened Friday in the Upper and Southern Lower peninsulas. It opens Friday in the northern Lower Peninsula.

Approximately 200,000 hunters will go out with some sort of black-powder rifle, according to Rudolph. Participation has fluctuated over the years, but numbers have been climbing. The muzzleloading season is another way firearm hunters get to extend their season.

Bowhunting also reopened Dec. 1 after the firearm season closed. The archery season runs through Jan. 1. The later season is not as popular as the early segment that opens in October, but bowhunting has gotten a boost from a growing number of hunters using crossbows.

Griffis expects to see more deer as a result. He has noticed more hunters using them during the archery season. Crossbows were legalized for the archery season in 2009. That development allowed older hunters to participate once again, having hung up their bows because of shoulder and other injuries and ailments.

“There seemed to be more crossbow hunters this year,” Griffis said. “It gives them an advantage. The elderly guys can’t pull a (regular) bow back any more.”

After more than 30 years in the outdoor writing business, you would think I'd know better.
View all posts by Howard Meyerson →
This entry was posted in Uncategorized and tagged Bowhunting, Deer, Deer Hunting, DNR, Firearm Deer Season, Hunting, Michigan Department of Natural Resources, Muzzleloading Season. Bookmark the permalink.