Posted on October 8, 2012 by Howard Meyerson

Diving on the Eber Ward in the Straits of Mackinac in 2012.

MUSKEGON, MI — Now and then we hear of a boat in trouble on the Great Lakes — a collision, a fire, someone who ended up on a rocky breakwall. It’s rare, though, that we hear about sinking ships. Boat and ship building technology is a lot better than it once was.

But the exploration of Great Lakes shipwrecks by sport divers and researchers is no a small chapter in Great Lakes maritime history. And because of advanced technology being used to find and study them, more is known about the old steamers and schooners that disappeared without a trace.

The Great Lakes are littered with historic maritime relics. I was surprised recently to learn Lake Michigan has more than 300 “found” shipwrecks. There are 1,500 total in the Great Lakes, says author, shipwreck diver and researcher Valerie van Heest, of Holland.

“Shipwrecks are like crime scenes. They provide evidence of what happened to the vessel,” said van Heest, author of a new book called “Lost & Found: Legendary Lake Michigan Shipwrecks.” In her book, van Heest tells the story of 20 of them.

Van Heest is one of several presenters discussing shipwrecks at a sure-to-be fascinating daylong “Shipwrecks and Technology” conference that is open to the public. It runs from 9 a.m. to 5 p.m. Oct. 20 at the Great Lakes Naval Memorial and Museum in Muskegon.

That also is home of the USS Silversides, the World War II submarine tied up along the Muskegon Lake channel. It can be toured as part of the event. Admission is $15 for the day. Details can be found at shipwrecksandtechnology.org

Van Heest, the co-founder of Michigan Shipwreck Research Associates, will present a talk about several sunken ships such as the Alvin Clark, a 130-foot wood schooner that sunk in Lake Michigan in 1864 near Green Bay.

Her second presentation will cover the Thomas Hume, another 130-foot wood schooner that took lumber to Chicago in 1891 and never made it back to Muskegon.

“It was a major mysterious disappearance,” van Heest said. “There was bad weather, but the owners couldn’t imagine that a storm that mild could take such a sturdy ship.”

Divers found it in “virtually pristine condition on the lake bottom with artifacts from the crew and the ship,” she said. “Finding a shipwreck allows the final chapters to be written. It gives us a connection to the past.”

But finding them isn’t easy. They may sit in waters far below the 130-foot depth 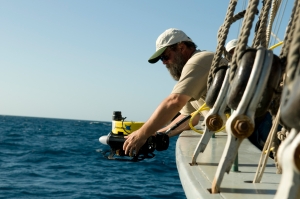 considered the limit for sport divers.

Beyond that is the cold, crushing world where special gas mixtures are needed to remain clear-headed when diving. It is the realm of unique, heated underwear and dry suits to combat the frigid cold.

Expert mixed-gas diver, Jitka Hanakova, owner of Shipwreck Explorers LLC, of Milwaukee, will give a presentation about the ins and outs of mixed-gas diving at the conference. She and her dive boat, the Molly V., were involved with the discovery, identification and first dives to the L.R. Doty, a 291-foot, wood steamer that sank in 300 feet of water near Milwaukee in 1898.

“Shipwreck exploration in very deep water is the realm of ROVs, remotely operated vehicles,” said Mark Gleason, director of education at the naval museum. ROVs are the unmanned drones of deep-sea or lake exploration. They are equipped with video cameras that provide the pilot and others who are shipboard a
detailed look at sunken wrecks and their holdings.

working for offshore oil companies. He has used them to explore wrecks in the Caribbean,

Florida Keys and Great Lakes. His presentation about ROVs that day will provide a glimpse of how they are used and how the remote under-
water technology is evolving.

“This is going to be a day for anyone that is interested in maritime heritage and the connection with shipwrecks and diving using any kind technology,” Gleason said.

Other presenters include Dennis Hale, the sole survivor from the Daniel J. Morrell, a freighter that went down on Lake Huron in the 1960s. Hale ended up in a raft and spent a day adrift in fall weather.

“He’s got a point of view that very few have,” Gleason said.

There also are presentations about shipwrecks in Muskegon County, cave diving and underwater photography. A group of Stockbridge High School students will share their experiences in the South Pacific last year, working with a national nonprofit group called The BentProp Project, an organization dedicated to exploring World War II crash sites using ROVs hoping to find fallen U.S. airmen and sailors who were shot down or sunk during the war years.

For divers, shipwreck or maritime history fans, the day should prove to be one of awe and wonder. It’s not often the colorful stories about lost ships and hands are brought to the surface. But that’s about to change. Don’t miss it.

This story appeared on MLive Outdoors